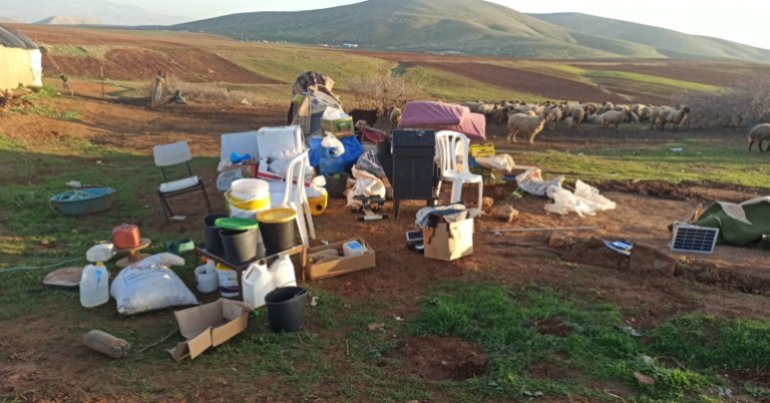 The Palestinian community of Humsa in the northern Jordan Valley has been invaded and had their homes demolished twice this week by Israeli forces. Local Palestinians were forced to sleep outside in the cold.

One resident, Abu Anas, told campaign group Stop the Wall about how Israeli forces invaded the village on Monday 1 February:

Abu Anas, his family & tens of other Palestinians from Humsa, Jordan Valley slept outdoors in the cold last night after Israeli occupation demolished their homes.
Ethnic cleansing practices of #Israeliapartheid are a crime against humanity.@AFPSOfficiel @PSCupdates @scottishpsc pic.twitter.com/PDEdW1lGpk

The United Nations Office for the Coordination of Humanitarian Affairs estimated that a total of 55 people including 32 children were made homeless on Monday. The agency tweeted:

➨ 25 structures (homes and animal shelters) were confiscated;
➨ 17 of them had been donated as humanitarian assistance;
➨ 55 people (including 32 children) were displaced for the 2nd time since November;
➨ 18 people were otherwise affected.

On the morning of Wednesday 3 February, UN OCHA reported that Israeli forces returned to carry out more demolitions in Humsa. According to the Palestine Information Center:

According to local sources, the IOF stormed the hamlet in the morning and blocked all the entrances leading to it before embarking on dismentling [sic] tents and homes and displacing families.

The IOF [Israeli Occupation Forces] had already demolished tents and homes and displaced the local residents in the hamlet several times before.

The third time within three months

The demolitions on 3 February were the third that had taken place in Humsa in the last three months.

Back in November 2020 The Canary wrote:

While all eyes were on the US election, Israeli jeeps and bulldozers rolled into the Humsa al Bqai’a Bedouin community in the northern Jordan Valley. They demolished homes and animal shelters, making over 70 Palestinians homeless. 41 children were left without shelter.

The November demolition in Humsa was reportedly Israel’s single largest in a decade.

Demolitions of Palestinian homes and property are part of the Israeli state’s colonisation policy in Palestine, and are illegal under international law.

Over 600 Palestinian homes and structures were demolished in 2019 alone. Research by UK based research cooperative Shoal Collective showed that during 2019 almost 30,000 Palestinians were affected by demolitions carried out by the Israeli state using JCB equipment. JCB machines also uprooted almost 7,000 Palestinian olive and fruit trees.

UK campaigners have been taking action against British company JCB, which provides equipment used in Israel’s demolitions. In October 2020 The Canary wrote:

Palestine solidarity organisers across the UK have launched grassroots campaigns against the company. Two groups of activists from campaign group Stop the Demolitions locked themselves in the road to shut down JCB’s UK premises. Campaigns have also been launched against the company’s franchised dealerships in Sheffield and Farnham.

…All these campaigns are part of a grassroots network dedicated to forcing JCB to end its supply of equipment to Israel.

Campaigners are also calling on the National Society for the Prevention of Cruelty to Children (NSPCC) to stop accepting donations from JCB.

International solidarity is still needed, despite the pandemic

Home demolitions are the expression of Israel’s ethnic cleansing policy against Palestinians, an almost daily reality. While the world’s attention is on the coronavirus (Covid-19) crisis, we must also keep on standing with those – like the residents of Humsa – who are on the sharp end of Israel’s creeping colonisation.