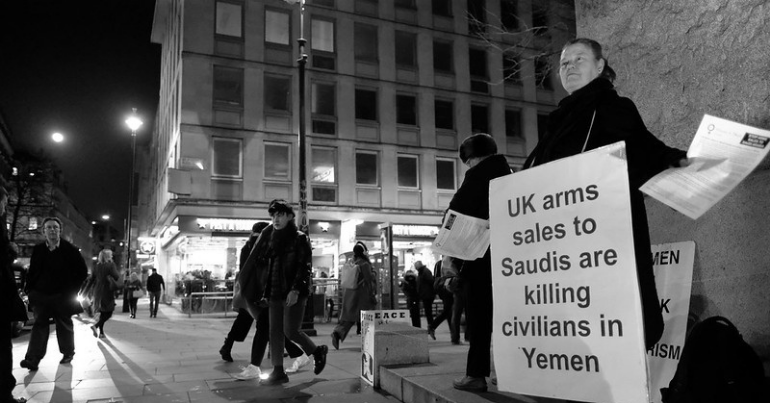 The US has temporarily suspended arms sales to Saudi Arabia and the UAE, putting pressure on the UK government to do the same.

President Biden said he would be reviewing previous administrations’ arms deals after pledging to “reassess” the US’s relationship with Saudi Arabia. This comes as the human rights situation in Yemen, caused by the civil war and Saudi Arabia-led air strikes, continues to worsen.

The suspension of arms sales by the US is a step in the right direction and ups the pressure on European countries, most notably the UK and France, to follow suit and stop fuelling the human misery in Yemen.

For years, we have been warning Western states that they risk complicity in war crimes as they continue to enable the Saudi-led coalition with arms. The Biden administration is finally acknowledging the disastrous effects of these continued sales, and puts to shame other states that continue to ignore the mountain of evidence of probable war crimes collected by Yemenis, the United Nations, and human rights organization over the course of the past six years.

The situation in Yemen

There is currently a humanitarian crisis in Yemen, with thousands on the brink of famine as its civil war continues.

In 2015, when the Houthi movement attempted to seize control of the country, a Saudi Arabia-led coalition launched an air campaign, believing Iran to be backing the Houthis. The coalition’s blockade of Yemen has caused a huge increase in food and fuel prices.

The Armed Conflict Location and Event Data project (Acled) said the Saudi Arabia-led coalition has killed more than 8,000 Yemeni civilians in its targeted air strikes. This is in addition to the hundreds of thousands of people the UN estimated have died – more than half from a lack of access to food, healthcare, and infrastructure.

According to Campaign Against Arms Trade (CAAT), in September 2020 the UK had approved the licencing of £6.5bn worth of arms to the Saudi-led coalition since the bombing of Yemen began in 2015.

The Court of Appeal ruled in 2019 that the government selling arms to Saudi Arabia without assessing whether the conflict breached humanitarian law was unlawful. In July 2020, the UK government announced it would resume selling arms to Saudi Arabia despite assessing it to have committed “possible” violations of humanitarian law.

[The Biden administration] must now move swiftly to put this into action by making the halt to the arms sales permanent, and by ending the ongoing technical and logistical support to the Saudi air force, without which they could not continue the war. Yemen can’t wait – the man-made humanitarian catastrophe caused by the war is putting millions at risk of starvation, so Biden must act now.

The UK government is becoming glaringly isolated in its continuing support for this bloody war. Outrage against the war is spreading worldwide. The US is moving against arms sales, and just last week Italy permanently ended the sale of bombs and missiles to Saudi Arabia and the UAE. But the UK government remains intent on pouring yet more fuel on the fire.