With governments asleep, a music festival is leading the world on drug policy - Canary 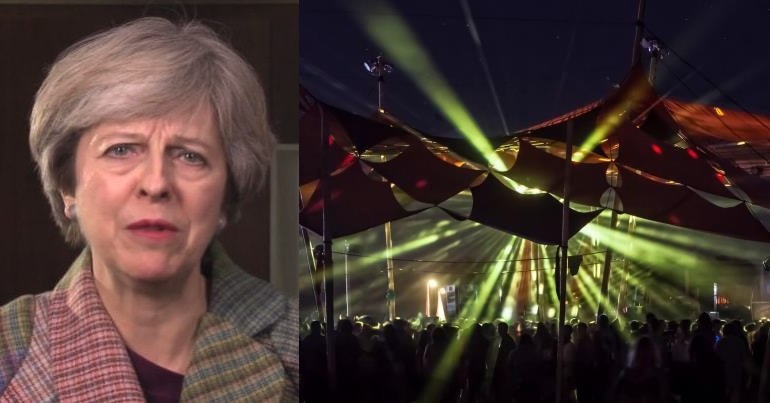 Governments across the world continue to pursue drug policies completely at odds with the evidence. Indeed, the UK government under Theresa May has only expanded criminalisation of drug users. While the powers that be stick their heads in the sand, it’s been left to Boom – a psytrance festival – to revolutionise the approach.

Kosmicare Association offers a number of services at the festival in Portugal. Among those, ‘crisis intervention’ seeks to help people who are going through an overwhelming drug experience, with a particular focus on psychedelics. Speaking to The Canary, Dr Maria Carvalho, Kosmicare president, says crisis intervention offers:

specialized sitters whose main purpose is to offer care and support to people undergoing a crisis episode related to psychoactive substances… allowing their experience to unfold in a safe environment and be adequately integrated and become as constructive and transformative as possible.

So it seems like what we do at the crisis level is apparently contributing to solve not only the problems and challenges to mental health that people are dealing with in the moment, but it also seems like these unsupervised use of psychedelics situations are triggering the same type of opportunities that come from psychedelic psychotherapy. And we do the best we can to turn what starts as a very frightening and negative situation into a potentially very positive and transforming one.

Studies in the 1950s showed that psychedelics could help treat various mental health issues. While drug prohibition has limited the research, gradually scientists are getting more green lights from governments. Over the last decade, a number of clinical trials have shown a positive impact from magic mushrooms on depression, for instance. Images have reveled that participants’ brain activity showed a reduction in behaviour associated with depressive symptoms. Professor David Nutt, the former UK government adviser on drug policy, said the “initial findings are exciting” while emphasising that we need larger studies. Researchers advise against self-medication.

But at music festivals, some people are already deep in a psychedelic experience. And it seems Kosmicare can help turn an overwhelming trip into a positive, or even life-changing event. One account shared with The Canary reads:

This day I had a breakthrough in my relationship with my father. Not everything had been solved this night. It was more like the beginning of a wonderful process, which led me to the realisation, that my parents always wanted the best for me and gave me all the love that they could give. With time I managed to look at my childhood from different perspectives and found peace with myself and my relationship

“Insiders to the scene”

Kosmicare has over 100 volunteers with a wide range of expertise. Another 20% work in paid roles. Carvalho told The Canary that they have many people combining a rare set of skills:

they are insiders to the scene, experienced drug/psychedelic users, have formal skills and knowledge in psychedelic science, and are trained psychotherapists/psychologists/psychiatrists.

Even with the volunteers, Boom spends tens of thousands of euros on Kosmicare services when the festival happens every two years. Crisis intervention, in particular, serves about 1% of the festival, which hosts around 33,000 attendees.

The Kosmicare service at Boom is made easier because it’s in Portugal. In 2001, the Portugese government boldly decriminalised the possession of personal amounts of all drugs.

Citizens then brought forward initiatives like Kosmicare, which began at Boom in 2004. The organisation also offers people the possibility to have their drugs chemically analysed. This enables data gathering so they can issue festival-wide alerts about dangerous impurities. Meanwhile, Kosmicare’s Harm Reduction Hub offers people councilling and safe-use materials.

In 2016, over 20,000 attendees visited the drug checking service and reduction/ information hub, according to Helena Valente, vice-president of Kosmicare Association.

In the UK, people have been struggling to advance these types of harm reduction strategies since the death of Leah Betts in 1995.

But Boom’s crisis internvetion centre has pioneered a different approach.

While Kosmicare works with emergency services and can provide both psychiatric and pharmacological treatment, crisis intervention is not based in a clinical setting. The space is softly furnished with fabric and walls thick enough to keep out the music from the nearby Alchemy stage. Upon entering the circular tent, visitors step onto carpet floors and are greeted by welfare workers. There are also individual pods around the outside for people to ride out their experience alone, if wanted.

One visitor, Scott, told The Canary that he was worried the staff may startle his friend. She was experiencing intense visuals after taking mescaline, a naturally occurring psychedelic from the San Pedro cactus. But Scott said the sitters greeting them:

were incredibly welcoming and weren’t wearing high-vis or a paramedic uniform. Nor did they act in this way.

Their approach was just complete love and understanding, absolutely zero judgement. The carers we spoke to were clued up with information about Mescaline, that left Rebecca able to gauge how long she’d be in the shifted state and left her feeling pretty relaxed. The staff gave us all the time we could possibly need and some pillows and blankets, so we could stay warm and just relax for a little while.

Rebecca added that she felt “more comfortable about having a bad trip in the future” after Kosmicare. Another visitor, Sophie, was also positive:

No judgment, I felt very genuinely cared for and safe. They let me stay as long as I wanted.

But one crisis intervention area attendee was concerned about approaches outside of conventional science, like reiki. Paddy said:

The guy who was looking after my girlfriend was a Shaman and trying to do reiki on her which I don’t believe in but I can understand can help to stabilise someone who’s having a bad psychedelic experience.

Carvalho confirmed to The Canary that the service accommodates alternative approaches. But she stressed that the crisis intervention team never treats a serious medical condition with exclusively alternative techniques.

When a new visitor enters Kosmicare, staff fill out a checklist comprising of 99 questions about the person’s condition. The instrument, shared with The Canary, inquires about the drug users’ thought processes, speech, self-consciousness, emotions, orientation, appearance, psychomotive behaviour and physiological condition.

When a visitor leaves the area, staff again fill in the same checklist. Carvalho said that Kosmicare crisis intervention is “highly effective” at reducing the symptoms recorded using the instrument. She notes that in 2010:

80% of our visitors presented total agreement with the fact that they felt helped by us, thought we were helpful, caring and available, and that we had well-prepared efficient staff.

“Did we know we were lying about the drugs? Of course we did.”

The UK government says we must criminalise drug users because of public health concerns. But there is evidence suggesting the ongoing ‘war on drugs’ has never been about the well being of the people. John Ehrlichman, Richard Nixon’s domestic policy chief, has come clean on the issue:

The Nixon campaign in 1968, and the Nixon White House after that, had two enemies: the antiwar left and black people. You understand what I’m saying? We knew we couldn’t make it illegal to be either against the war or black, but by getting the public to associate the hippies with marijuana and blacks with heroin. And then criminalizing both heavily, we could disrupt those communities. We could arrest their leaders. raid their homes, break up their meetings, and vilify them night after night on the evening news. Did we know we were lying about the drugs? Of course we did.

Given that some people will take drugs regardless of the law, Kosmicare engages practically with the situation. On top of short term crisis resolution, the service appears to nurture the possibility of the visitor tackling deeper problems.