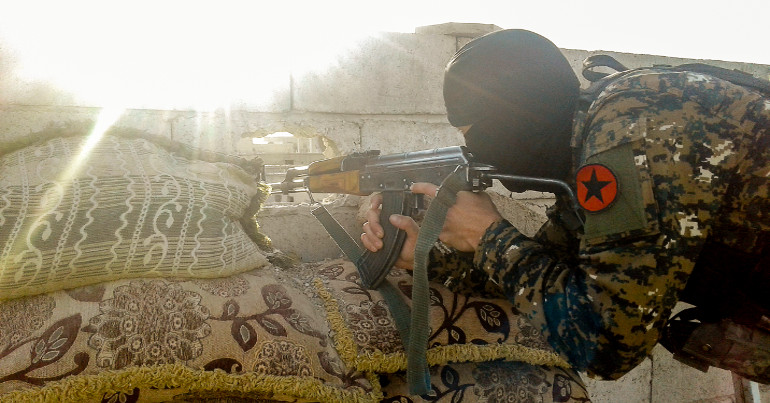 An anti-fascist fighter has spoken to The Canary about defeating Daesh (Isis/Isil) in its Syrian capital, Raqqa. And he explained why he was happy to risk his life to join that battle.

Joining the fight to defend a progressive revolution from fascist invaders

In 2012, a revolution began in the majority-Kurdish region of Rojava in northern Syria. People organised themselves into communes, declared autonomy, and began practising stateless direct democracy. The revolution, however, was under threat from the very beginning, and has faced invasion by Daesh and Turkey. And hundreds of women and men from around the world volunteered to defend the revolution.

The Canary recently spoke to a returned member of the International Freedom Battalion (IFB) about why he decided to go. Over the coming weeks, we will be releasing his account in several parts.

When volunteers join the movement in Rojava, it gives them a new name. And we will refer to our interviewee by his movement name, Argeş (pronounced Argesh). Originally from the US, Argeş travelled to Rojava in 2016 to join the Kurdish-led People’s Protection Units (YPG) in their fight against Daesh in Raqqa.

The Canary: Why did you decide to go to Rojava?

Argeş: I had been following the Syrian civil war since the beginning. That’s how I learned about the Kurdish movement and the whole idea of the Rojava revolution… then [I heard] about this group called the YPG, who were fighting Daesh, and doing a great job of it… and [I learnt] about their ideology of democratic confederalism [the practice of governing society from the bottom up, through autonomous communes cooperating together].

Finally, I learned that there was a call for internationals to join the revolution. At that time, my life was all over the place and I wasn’t doing so much. I wasn’t involved in any political movements. I had all these ideas, like: ‘yeah, I like communism, I like socialism,’ but I didn’t really know what I was saying.

Finally, at the end of 2016, I was working in advertising and I had a personal crisis – an existential question: ‘What am I doing with my life?’

I had all these ideas: I supported this movement and I really believed in it. I’d seen all the things happening in Syria – I’d seen that there were actions being taken… My mum would often say, ‘you have all these ideas but you never put any of them into action. You have to live up to the ideas that you believe in; you can’t just talk about them all the time and then do something completely different.’ And that coincided with this personal crisis that I’d brought on myself, that made me seriously re-evaluate everything and say: ‘what am I doing with my life? I’m part of the problem, not part of the solution.’

I managed to go over [to Rojava] and I joined the IFB… From there, I did my training and went to the front in Raqqa.

Can you tell us about your time in Raqqa?

In Raqqa, I joined up with the frontline forces of the IFB, which at the time was composed primarily of three Turkish left parties and two internationalist groups.

Under the YPG command, we would engage in joint operations with local members of the Syrian Democratic Forces (SDF) [a coalition of Syrian Kurdish, Arabic and Assyrian/Syriac militias that was formed for self-defence and to counter Daesh] to take and hold positions in the city.

A typical operation would consist of waking up at 3 or 4am to meet at the coordination point in the city. There, we would receive instructions on what buildings we would take. In a typical day-long operation, the IFB team would act as the front team, responsible for clearing and taking the buildings we had been assigned to. Once each building was clear, the local SDF team would follow up behind and hold the building for the following weeks.

The other operations we would engage in would be holding defensive positions… Typically, we would stay in these positions for 2 weeks until the line had advanced.

How many international volunteers were there in Raqqa?

IFB at its peak was about 35 during Raqqa.

Was that what you expected?

If you look at the historic data [and compare it] to the internationalists who fought in the Spanish Civil War, our numbers are way lower than I imagined. Especially in the digital age where we have so many means of global communication. I think it raises an interesting question and, in my opinion, critique of the state of internationalism. It would appear that capitalism in the post-modern age has taken its toll. I think it’s indicative of rampant sectarianism, individualism and, worst of all, egoism. Instead of publishing pretentious texts or continuously searching for reasons why we shouldn’t work together, we should be building stronger solidarity committees or coming directly to Rojava to participate and add new perspectives and ideas to the mosaic.

I think we can see the limited engagement from internationals as an indicator of the poor state of the West’s revolutionary groups… this is not meant to generalise about the entire revolutionary left. In fact, there are many groups throughout the world that are working hard on organising within their respective communities in addition to creating great solidarity actions and campaigns with Rojava.

To quote a Kurdish comrade, “revolution is not a hobby”.

Can you say a little bit about the other people who were volunteering for the IFB?

We had comrades from all backgrounds. We had communists, socialists, anarchists, social democrats, and of course, Apocis [those influenced by the ideology of jailed Kurdistan Workers’ Party (PKK) founder Abdullah Öcalan], people from all around the world. It was amazing to see how we all managed to put aside ideological differences to work as one cohesive unit. We lived together, fought together, and we shared our grief together. It was pretty powerful to see how, despite the differences, despite the friction of the day-to-day bullshit, we still all came together.

I think it offers hope for us and for all of those who are trying to unify our struggles. It is possible.

Tom Anderson is part of the Shoal Collective, a cooperative of writers and researchers writing for social justice and a world beyond capitalism. Twitter: @shoalcollective