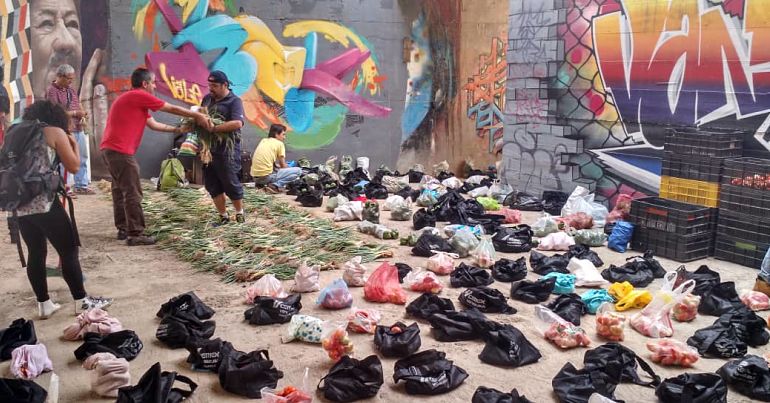 Over past weeks, life in Venezuela has become increasingly difficult. Frequent blackouts have caused water shortages, leading to mounting anxiety among a population already suffering a severe economic crisis.

In such circumstances, it might be tempting to yield to pressure and say ‘the publicised alternative must be better’. But many Venezuelans see past Washington’s alleged ‘humanitarian’ concerns; and they see its very own responsibility for this crisis within an attempt to restore neoliberalism to the country.

The Canary has witnessed how – faced with external threats, economic warfare, and an international disinformation campaign – many Venezuelans continue to write their own story of revolution, solidarity, and struggle. This is the other Venezuela: the one that the corporate media categorically fails to cover.

Why the government still has support…

On 23 and 30 March, thousands of people marched through Venezuelan capital Caracas in defence of the country’s ‘Bolivarian revolution’. The real revolution, however, was taking place in community halls throughout the country.

On 30 March, The Canary attended a community meeting about autonomous education in a housing project in Petare, one of Venezuela’s poorest barrios (neighbourhoods). In such areas, former president Hugo Chávez’s eyes are painted on every other wall. In family homes, meanwhile, pictures of Chávez occupy the wall space where – in a mostly Catholic country – one might expect to find Jesus. There is undoubtedly a cult of personality surrounding Chávez; but many would argue that ‘Chavismo’ is less about the man than the democratic movement he created.

All of us here have been beneficiaries, in some way, of the Missions that Chávez introduced. This housing project was built under the Great Housing Mission, with the goal of fighting poverty and getting people out of precarious living conditions. Then there are other Missions – Sucre, Ribas, and Robinson – that focus on education. They all connect here.

The room nodded in agreement, as members intermittently interrupted Alzate to speak about their own experiences. Rosalida Cedeño, who completed her degree later in life through Mission Culture, said:

Politicians never came here before Chávez. We were completely forgotten about, left to rot. Chávez gave us the opportunity to study – to make something more of our lives.

Cedeño read one of her own poems. Héctor Ruíz, a local teacher and self-defined disciple of popular Brazilian educator and philosopher Paulo Freire, commented afterwards:

She wouldn’t have been able to read that poem before because the structure of the system simply wouldn’t allow it. The difference that these schemes made is unthinkable. It really feels like we’ve broken locks.

Poor communities like those in Petare are the hardest hit by Venezuela’s economic crisis. But they’re also among the first to defend the revolution which, in their view, began to reverse centuries of structural inequality in Venezuela. And they seem committed to not being bullied into re-applying the ‘locks’ that they broke two decades ago.

Though there is no visible shortage of food in Venezuela, the country’s economic crisis has crippled wages, making many products unaffordable. The Venezuelan government responded to rising food prices in 2016 by implementing Local Provisioning and Production Committees (CLAPs). These distribute government-subsidised food packages to over half of the population. In many regions, locally organised ‘Food Houses’ also serve government-subsidised meals to the area’s most vulnerable people.

Herminia Ladera, a spokesperson and leader of the Vargas commune, told The Canary:

If we don’t have community, we have nothing. Thanks to the revolution, our community has these Food Houses that are each feeding up to 200 people each day. We’ve also got our own bakeries making affordable bread. Anyone who needs help, we offer it: elderly or incapacitated people, pregnant women; we also help with maternity leave. There are no distinctions here whether you’re Chavista or opposition: our commune works to help everybody.

As Washington intensifies economic sanctions, however, the government’s ability to subsidise food will deteriorate; and the Venezuelan population will edge closer to starvation. But certain communities aren’t waiting for this to happen; and they’ve developed ways to insulate themselves from some of the worst impacts of the economic crisis. On 23 March, The Canary visited Alpargata Solidaria, one of many collective food markets that have popped up across Caracas.

One of the collective’s organisers, María Eugenia Freitez, explained how it functions:

As a community, we buy food directly from rural producers and organise ways to distribute it efficiently. In this way, our community can eat cheaply. We’re not paying extortionate supermarket prices. We’re not paying extra for transport or the supermarket staff. Nor are we relying on the government to subsidise food. We sell 20kg bags of vegetables for roughly 20,0000 Bolívars ($6 dollars), which is around a quarter of the market price.

Nobody thought we could create a system that totally bypasses the ‘bachaqueros’ [markets that sell overpriced food], but we did it. And now, we’re feeding roughly 900 people.

Venezuela’s minimum wage, however, is roughly the equivalent as the price of one of their bags. The Canary asked how the community’s poorest people could afford it:

Well, that’s the point of the community. When you’re in a community, you can talk and organise and figure out the problems within your community. Families can share bags, for instance, or pool together to make it work.

We’ve also made an art and dance studio here, and developed a system where people can exchange time as a currency. People can offer an hour of their time helping with one thing in exchange for an hour for something else.

Another organiser, César, spoke to The Canary about the advantages of collective markets:

The media only shows the bad side of this country. This is one of the positive things: an example of self-mobilisation and organisation. And our market is sustainable. We waste less energy transporting food; less energy when it sits in the factories. And we also re-use bags.

There’s a psychological aspect to all this. If you buy your food in the supermarket, it’s an isolated experience. You do it alone. Here, it’s like a party. The community comes together. And look around, people are dancing, singing, talking.

‘Figuring it out ourselves’: a whole new communal struggle

Alpargata Solidaria is but one example of changing relationships around food in Venezuela. Many see rising food prices as evidence of class warfare, in which private businesses – notably multinational corporation Polar – are using their monopoly over vital foodstuffs to punish the general population for their political choices. As one organiser explained:

Polar’s CEO, Lorenzo Mendoza, ran for the presidency. He’s part of what we call the ‘corporate presidents’ – the Trumps, the Bolsonaros.

We’ve started to eat things that we never ate before. We’re using products that we don’t need to get through these private businesses. Many of us are growing our own produce where we can. I’ve got peppers, coriander, and garlic growing on my shelf.

And without the corn flour to make ‘arepas‘, we thought we couldn’t make them. But now, we’re getting the corn whole and grinding it together to make the flour. It’s far cheaper and incredibly liberating. In this way, this war has shown us the dormant potential we have inside ourselves.

She continued by talking about why her community struggles:

We’re among the most dispossessed people in this country, yet we’ve found the motivation to fight. We’re proud of this struggle.

And we know the root of the problem – the root of this economic war. We have such wealth in our country – wealth that other countries want. And bit by bit, we’re advancing; we’re fighting with dignity. If we need to figure this out, we learn – to work, to cook, to study, whatever – we fight hard to figure it out ourselves.

Her words have real meaning. Because as The Canary has experienced, poor people throughout Venezuela’s barrios are mobilising to ‘figure it out themselves’ – without outside interference. In this sense, Washington’s economic war on Venezuela has initiated a whole new revolution; a whole new communal struggle.

Many Venezuelans are not waiting around for Washington’s boot to crush them. Across the country, social organisations have benefited from the Bolivarian revolution and are harnessing their power to support their communities through increasingly difficult times.

Given that the Venezuelan opposition threatens to dismantle the major socio-economic gains achieved during two decades of Chavismo, these organisations will fight to defend their government. But this support isn’t about preserving elite power structures; it’s a wider struggle for communities to govern themselves. That’s a crucial point to note.