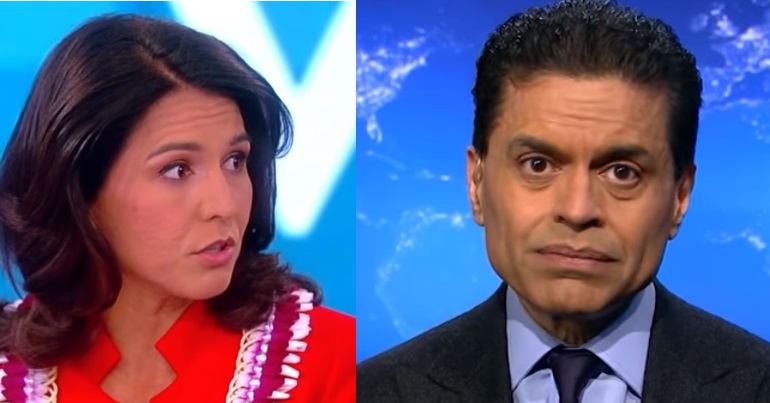 Pressuring Trump from the right

Zakaria made his criticisms of Trump both in the highly influential and CIA-linked Washington Post as well as during his weekly television show GPS on CNN.

In his Washington Post article, Is Venezuela where Trump finally stands up to Putin?, Zakaria asks:

Why has Trump been unwilling to confront Putin in any way on any issue? And will Venezuela be the moment when Trump finally ends his appeasement?

Gabbard, however, quickly slammed Zakaria for ‘goading Trump into war’:

TV talking heads love trying to goad Trump into going to war w/ Russia. Here’s just one example: Fareed Zakaria is trying to get Trump to prove he's not guilty of appeasement by going to war with Russia over Venezuela.

The Trump administration has long been pushing incredibly destructive and illegal sanctions onto Venezuela, as part of an ongoing US-backed coup attempt. In that respect, he’s been accelerating the policies of former president Barack Obama towards the country.

Trump also continues to send lethal weaponry to the fascist-linked coup government in Ukraine. He has been undermining a major Russian-German natural gas deal, and demanding Turkey reverse its decision to purchase a $2.5bn anti-missile system from Russia. And his government has withdrawn from the Intermediate-Range Nuclear Forces (INF) Treaty with Russia, which the US signed in the 1980s to reduce the likelihood of nuclear war. At the same time, he has overseen increasing sanctions on Russia. Zakaria gives no explanation as to what further action he expects from Trump.

It is also significant that Zakaria called Russia’s support for Maduro’s government a “violation of the Monroe Doctrine”. In 1823, US president James Monroe established the doctrine that warned European powers against acting in the Western hemisphere without US approval. US president Teddy Roosevelt, an imperialist and racist of the highest order, later amended that doctrine to say that the US essentially had the right to intervene throughout Latin America as it saw fit.

Zakaria is a member of the highly influential invite-only thinktank called the Council on Foreign Relations (CFR). As such, the views of Zakaria – a protégé of late foreign policy hawk and national security adviser Samuel Huntington (also a CFR member) – largely reflect the views of the foreign policy establishment.

Iraq veteran Gabbard, on the other hand, has made opposition to ‘regime change’ wars a key part of her 2020 campaign. The fact that she is also a member of the CFR is significant, as it places her in the minority when she admonishes people like Zakaria.

Russia expert Stephen F. Cohen says the US is in a ‘New Cold War‘ with Russia. And the foreign policy establishment’s near universal acceptance of Zakaria’s worldview partially explains why he has argued that this Cold War is “more dangerous” than the last. He has lamented the lack of meaningful opposition to it in the streets, the press, and the political class. Cohen himself had been a member of the CFR since 1977 when he resigned in 2018 “in protest” over the organisation’s increasing “group think”, and exclusion of alternative views, on US policies towards Russia. He recently authored the book War with Russia? and says that the fault for this New Cold War primarily lies in Washington DC rather than Moscow.

As Gabbard highlights, we need to start demanding de-escalation from our representatives now. Because otherwise, real change from the top may come too late, if at all.