While 'all options are on the table' for the US, Venezuela's civil militias are preparing for battle - Canary 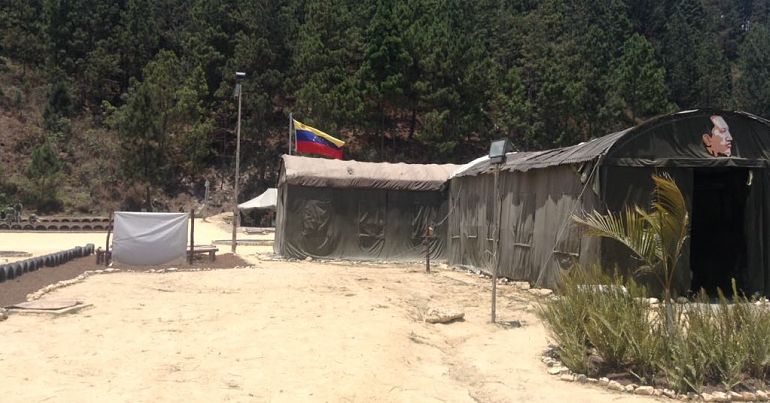 US president Donald Trump has repeatedly suggested that “all options are on the table” in Venezuela – a clear and gangster-like allusion to military intervention. Although US special envoy to Venezuela Elliott Abrams revealed in March that Washington’s provocative language is designed to make the Venezuelan military nervous, ordinary Venezuelans are not taking their chances.

The Canary visited the National Bolivarian Militia of Venezuela in Caracas, a citizen force that is training to defend the country from external attack.

The People’s Militia was founded by former Venezuelan president Hugo Chávez in 2008. It functions as a civilian supplement to the official army, made up of ordinary citizens willing to protect their country.

According to current president Nicolás Maduro, the militia now has 1.6 million members – roughly 5% of Venezuela’s population. Maduro explained the militia’s function to members in 2018:

An invading imperialist force may enter a part of our fatherland, but the imperialists should know that they will not leave here alive.

Indeed, many in Venezuela have used the word ‘kamikaze’ when describing possible US military intervention. “This will be worse than Vietnam, worse than Afghanistan,” explained one organiser. “The opposition has the dollar. We have a whole country.”

The militia can only be activated by the official army in times of national emergency. On 23 February, for instance, when the US attempted to bring ‘humanitarian aid’ trucks on to Venezuelan territory, the militia was activated.

If you’re in a country with a revolutionary government, and where your historic enemy won’t like this because they’ve always wanted to dominate Latin America, then the threats will begin. The US doesn’t sleep. At the moment, what keeps them awake is Venezuela; a peaceful country that has tried to enact change without violence.

The Canary was given access to one of the militia’s training grounds, named 418 Baruta, on 1 April. As we drove up a winding hillside to its entrance, our driver spoke about the importance of the militia:

The militia isn’t like the Colombian paramilitaries. The militia is part of our constitution. We come here as volunteers; we do all sorts of training: rifle training, grenade training. But we don’t take any of our arms home – they stay in the training camp.

We’re paid some money; but it’s mostly a symbolic wage. We come here because we want to.

The site soon came into view; uniformed officers milled around the parking lot, which was lined with beaten up jeeps and trucks. “That one’s the commander’s,” said our driver, pointing to a truck sitting on four concrete blocks and missing every window.

In the camp, volunteers were practising hand combat in small grids laid out by rocks on the dusty ground.

The sub-commander approached, and spoke about the militia:

We have Chávez in our hearts and want to defend our country.

An older militia member explained how it functions:

We learn to handle rifles and other arms. But since I’m older, I wouldn’t be deployed to a war situation. People like me can contribute in different ways: helping with food, washing clothes, even making coffee.

Up until now, the Venezuelan military and militia have remained loyal to the Venezuelan state – meaning the US-led attempted coup has failed. And as journalist Rachael Boothroyd concluded in the following documentary on the militia, “if Trump is planning a military invasion, I think he might be quite surprised in terms of how many people are actually waiting for him”.