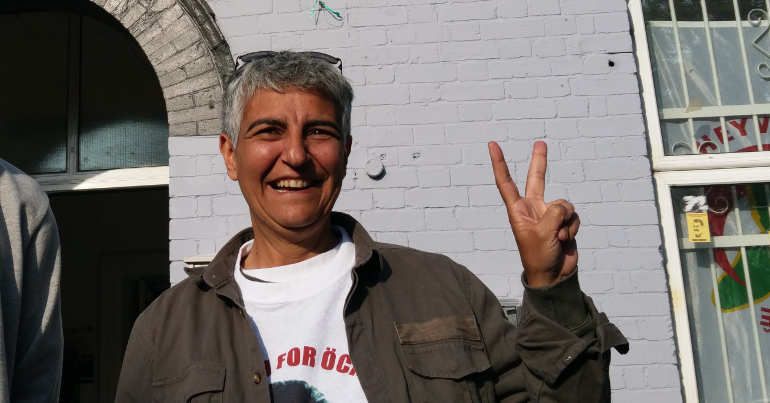 The Canary recently spoke to a 48-year-old woman in London who’s on hunger strike. And she explained exactly why she took this drastic step.

Nahide Zengin has a positive attitude which is so contagious that I can’t help but grin. Like many others, she’s in exile. Branded as a ‘terrorist’ by the Turkish state, she now lives in London. Along with roughly 7,000 other Kurdish people around the world, she is on an indefinite hunger strike. She has been surviving on a combination of liquids, sugar, salt, and B vitamins since 14 March. With a big, determined smile on her face, she says she’s at high risk of a heart attack or a stroke.

She’s not the only Londoner on hunger strike. Mehmet Sait Yilmaz has also been on strike for the same amount of time. Like all of the hunger strikers, Nahide and Mehmet are demanding that Turkey lifts the isolation of Kurdish leader Abdullah Öcalan, who has been imprisoned by Turkey for 20 years. For much of that time, Öcalan has been kept in solitary confinement, without contact with lawyers or his family.

In the first of a two-part interview with the London hunger strikers, The Canary asked Nahide about her life, the situation for Kurdish people, and why she is prepared to die.

The Canary: What are your reasons for hunger striking?

Nahide Zengin: It is very simple. We are fighting for justice and freedom in a peaceful way. In the [Turkish] constitution, it says that prisoners have rights to have visitors, phone calls, doctors, media and lawyers. [These are denied to Öcalan.]

Our hunger strike action makes us understand more about Abdullah Öcalan’s isolation. We think deeply about his situation, and we have more empathy with him.

Do you think the hunger strike has had a positive outcome so far?

This action has brought to light Öcalan’s real situation. Sometimes, to know something and to actually understand something and give it meaning can be different. So at the moment, the outcome of our struggle is that this huge isolation on Öcalan is understood more by the public.

Can you talk about your life?

I’m from Dersim [in Bakur, the Kurdish region of Turkey]. I come from a political family, who are just hoping that this struggle will end in victory. I know that my family understands me, so that makes me feel good.

In 2004, I was tried and sentenced in Adana heavy penal court [for ‘terror’-related offences]. I was sentenced to six years in prison and I had to flee the country.

It was not difficult [for the Turkish state] to find a reason [to find me guilty]: even finding a Kurdish newspaper in the house could be a reason to charge someone with being a ‘terrorist’.

At the same time that I was on trial, two of my siblings were also on trial in different cities. One of them was acquitted and one of them had to pay a fine and was forced to do military service. But they wouldn’t give him a gun: they didn’t trust him with a weapon!

If we look at the peace process [between the Kurdistan Workers’ Party (PKK) and Turkey], who brought it to the table? Öcalan. Who destroyed it? [Turkish president Recep Tayyip] Erdoğan. So if you look morally at the situation, who is the terrorist? The person who brought peace to the table or the person who destroyed it? We want justice. If this makes us terrorists, what can I say?

According to the Turkish state, the best Kurd is a dead Kurd. When you look at my family, most have had to migrate from Dersim. Every family – political or not – has suffered because of repression by the state. There are different types of state repression: either through being arrested or psychological. And we’re treated as though we migrated to Kurdistan, as if we came from elsewhere, and not them. The feeling of belonging in Bakur has been destroyed by state policies. But when I was living in Rojava [the majority-Kurdish autonomous region of northern Syria], I felt that I belonged there.

What were you doing in Rojava?

I was there in 2016 and 2017. I started Jinwar [a women’s village] and some economy projects, as well as cooperative projects about farming.

But our friend, Mehmet Aksoy, was killed [by Daesh (Isis/Isil)], so I came back illegally the day after Mehmet’s body was brought back. If I’d tried to travel legally I would have been arrested by the Iraqi Kurdistan government.

You recently joined the three-day occupation of Amnesty International to protest about the organisation’s silence over the isolation of Öcalan. Amnesty refused to let activists use the toilet and finally called the police, resulting in a number of arrests. Can you say more about what happened?

My blood pressure was high and I had a high risk of a heart attack. I was taken to hospital by ambulance on the third day of the protest. When we were there, we heard about the police presence at Amnesty, so I refused treatment and went back to their office directly.

I saw someone – a man in a high position in Amnesty – pointing at demonstrators so that the police could arrest them. So I intervened. The police tried to arrest me. But there were a lot of people around me preventing it. Someone I didn’t know – a member of the public – held me [in his arms] and protected me. I told the police that my potassium level was high and that I was at risk of a heart attack or a stroke. The officer said, “you shouldn’t come here, then.”

When you look at Amnesty’s statement [about what happened that day], everything they have said to the public is a lie. Their report about the number of protesters is a lie. What they say about us attacking the security – and that a security guard was laying on the floor – is a lie. They said we put their 300 staff in danger: this is a lie. They are committing a crime, lying to the public about us.

Is there anything else you want to let people know?

It was [Kurdish-led forces] who defeated [Daesh] and brought victory to the world. The world really owes the Kurds, and they should pay their debt.

We are really fed up with the oppression by the [Turkish] state against the Kurdish people. Our mothers are beaten in the street. Children can’t play on the street. Kurdish youths spend their lives in prison and are tortured. Enough is enough. This is a freedom struggle, and it will end up in victory because you can see our will.

I want to live: you see all the energy in me! But I am also ready to give my life, and this is the same for my friends.

Special thanks to Emily Apple for her help with this interview.