As US seeks to crush media freedom, we all need to read Assange's letter from prison - Canary 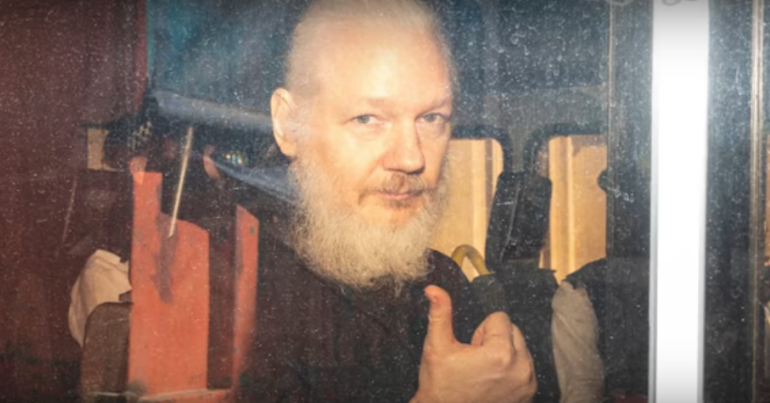 The Canary has received exclusive access to a purportedly hand-written letter from Julian Assange in Belmarsh prison. The letter, dated 13 May 2019, reveals Assange’s prison conditions and difficulties building his own defence. It also acts as a critique of Washington’s attempts to crush media freedom, and as a call to action from his supporters.

The US government has now indicted Assange on 17 new counts under the Espionage Act. Whistleblower Daniel Ellsberg, who released the Pentagon Papers on the Vietnam war to the New York Times and other newspapers in 1971, told Democracy Now! in response that:

There hasn’t actually been such a significant attack on the freedom of the press… since my case in 1971.

Executive director of the Reporters Committee for Freedom of the Press (RCFP) Bruce Brown, meanwhile, said:

Any government use of the Espionage Act to criminalize the receipt and publication of classified information poses a dire threat to journalists seeking to publish such information in the public interest, irrespective of the Justice Department’s assertion that Assange is not a journalist.

Assange is currently serving 50 weeks in Belmarsh prison for skipping bail – a sentence WikiLeaks described as “shocking and vindictive”. The UN working group on arbitrary detention also said it was a “disproportionate sentence” for what it described as a “minor violation”.

The letter attributed to Assange was sent to independent journalist Gordon Dimmack, who was among many to write to Assange over recent weeks. Dimmack explains that he was reluctant to share the letter before the US government’s latest indictment against Assange.

Other supporters of Assange have recently confirmed that their letters have reached him. It is nonetheless difficult to fully authenticate the letter given Assange’s current predicament in a high-security prison. The Canary has been informed that Dimmack is not the only person to have received a response, and that the hand-writing bears a likeness to that of Assange.

“Truth, ultimately, is all we have”

The letter – which was delivered from Mount Pleasant mail centre in London – was hand-written on lined paper. And after describing conditions in prison, it acts as a rallying call, saying:

The other side? A superpower that has been preparing for 9 years, with hundreds of people and untold millions spent on the case. I am defenseless and am counting on you and others of good character to save my life. I am unbroken, albeit literally surrounded by murderers, but, the days where I could read and speak and organize to defend myself, my ideals, and my people are over until I am free! Everyone else must take my place. The US government, or rather, those regrettable elements in it that hate truth, liberty and justice, want to cheat their way into my extradition and death, rather than letting the public hear the truth, for which I have won the highest awards in journalism and have been nominated 7 times for the Nobel Peace Prize. Truth, ultimately, is all we have.

The original letters are pictured below: 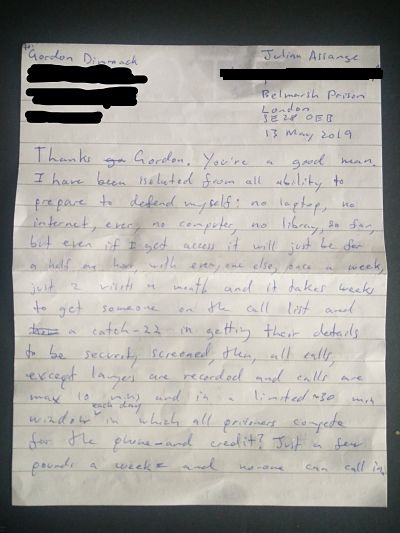 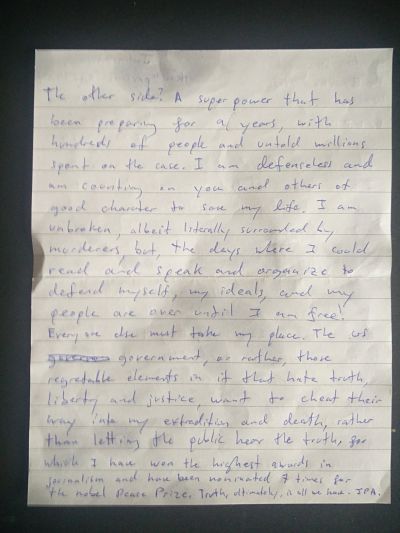 “Everyone else must take my place”

Assange’s persecution should not only alarm press freedom advocates. It should worry absolutely everybody. Because our right to know is in peril. And if we want to keep holding the powerful to account, we must all stand up to protect that right.