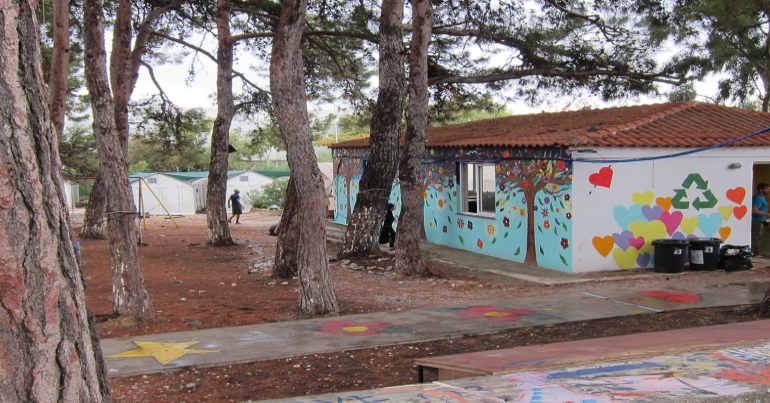 Pikpa is an independent, grassroots refugee camp on the Greek island of Lesbos. The camp provides an example of how refugees can be welcomed to Europe with solidarity. The community environment provided by Pikpa stands in stark contrast to the state-run and EU-financed Moria detention camp, which has often been called “the worst refugee camp on Earth”.

A place of refuge

Lesbos is an island in the northern Aegean Sea. It lies just off the coast of Turkey. And it has always been a place of migration into Europe. Armenian and Greek people, for example, took refugee there after the First World War during the genocides that accompanied the formation of the Turkish state.

Lesbos became a place of refuge on a mass scale again in the early 2000s, as the chaos unleashed by the West’s neo-colonial policies in the Middle East drove people out of their homes.

2,942 refugees have arrived on Lesbos so far in 2019. Many of them are prevented from leaving the island by the EU’s containment policies. Access to the Greek mainland has been tightly controlled since the 2016 EU-Turkey deal. This has transformed the Aegean islands into what is effectively an open-air prison for refugees. The Canary has received documents from the United Nations High Commissioner for Refugees (UNHCR) stating that 7,000 refugees are currently on Lesbos; the majority in overcrowded and dangerous conditions in Moria.

A history of resisting borders

The Canary spoke to the residents of Pikpa camp and the activists who set the project up about Pikpa’s history and what the project means to them.

Efi Latsoudi told us that, “in 2001, increasing numbers of refugees began arriving”. The Greek authorities soon responded by imprisoning the refugees. This sparked mass protests in 2009, and thousands of people demonstrated against the Pagani prison camp. Shocking videos of prison conditions were later smuggled out to activists. And according to Latsoudi, this pressure forced the authorities to shut down Pagani.

‘The Village of All Together’

Latsoudi tells us that the numbers of people arriving on Lesbos increased again after the repression of the Arab Spring in 2011 and the outbreak of the Syrian civil war. Numbers coming grew further in 2012 as a fence was built to make it more difficult to cross into Greece at the north-eastern land border of Evros.

Members of the community on Lesbos were then faced with Greece’s economic crisis and the rise of the fascist Golden Dawn. Racist attacks and murders were on the increase in Greece, and local racists were scapegoating the refugees in order to mobilise support for the extreme right.

Local activists realised they needed to respond. So a broad coalition was set up, ranging from leftists and anarchists to church groups, with the idea of setting up an open refugee camp in an old government-owned children’s holiday camp called Pikpa. The initiative was called ‘The Village of All Together’. Latsoudi tells us that its aim was to create a way that the “refugees could be supported by the local society” and create solutions together through solidarity. The camp would be free from the fences, barbed wire, and controls that are a key feature of Greek state-run camps.

Activists gained control of Pikpa in 2012, and it has supported refugees on the island ever since. At first, it provided interim accommodation for people en-route to the Greek mainland. Since the EU-Turkey deal, however, many people have been forced to stay longer. So Pikpa now houses 80-120 refugees on a more long-term basis.

Pikpa focuses on creating a community environment. And the camp now has its own clinic and staff as well as activities such as yoga, sports, and English language support. It has also become part of grassroots NGO Lesvos Solidarity.

The Canary spoke to Pikpa resident Mohammed Ali. He first described arriving in Lesbos in November 2016:

When I arrived in Greece, they took me to [the] Moria [state-run detention camp]. I lived there for 6 months and it was very difficult. The food was not good and people were fighting and starting fires all the time. Sometimes, I slept outside of the camp because the whole camp was on fire. In Syria, there was war, but we didn’t have to sleep outside.

My 64-year-old mother was with me and it was very difficult.

Soon the snow came and five people died in Moria because of the cold – they were living in tents. Because of this, [the authorities] moved families to hotels. But the single men remained in Moria. I told my lawyer I didn’t want to go back – and he arranged for me to come to Pikpa.

In Pikpa, I started to relax and began to speak to people. I learnt English from the volunteers here.

Kader Hussein from Afghanistan, meanwhile, lives in Pikpa with his wife and family. He told The Canary:

I lived in Moria for six months before I came to Pikpa, and the situation we had there made me disappointed with life.

Since I came here, Pikpa has provided many opportunities like education, health care, food boxes and a kindergarten, pharmacy and a psychologist for me and my family. I became optimistic about life again. Pikpa is the only place in Greece that a refugee can feel comfortable and hopeful for the future.

A weekly community meeting is held in the camp to discuss problems collectively. According to Mohammed:

The community meeting here is very important. They tell us about everything. If anyone has a complaint, they can make it. If we want to suggest making a party, we can do it.

Lesvos Solidarity puts a lot of importance on maintaining its independence. The organisation does not accept grants directly from the Greek state, for example. And it tries to avoid any money that comes with strings attached. According to Pikpa team member Pedraam Khorasani:

The reason Pikpa has survived as long as it has, and what makes it a project worth pursuing, is because it has autonomy. And that autonomy makes it more than just a place of shelter. It has become symbolic of a better way of doing things.

I think that it’s very important to be able to raise our voice – to have a political voice. Criticism of the government and the EU is very important. We try to get funding, but we try to do it without compromising our voice. I don’t think we will have any role if we stop talking about and raising awareness about what’s going on.

Indeed, Pikpa’s solidarity model presents a true people’s alternative to the indignity of Greece’s state-run camps. And it needs our support and solidarity if it is to remain independent.

Featured image via Lesvos Solidarity – Knut Bry with permission. Some of the names in this article have been changed at the interviewees’ request.

The author is part of the Shoal Collective: a cooperative producing writing for social justice and a world beyond capitalism.