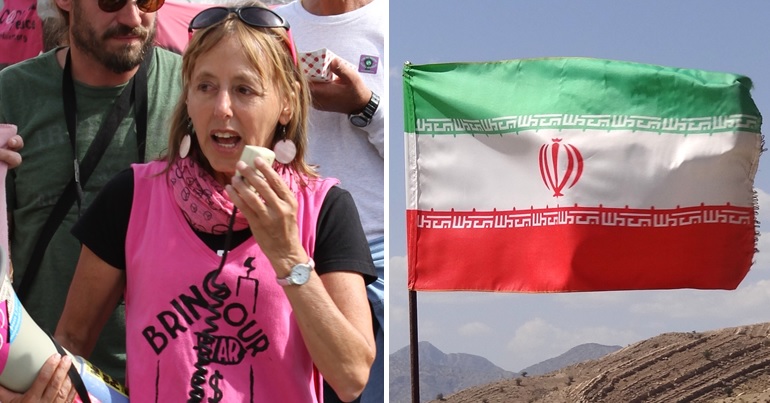 Campaign group CODEPINK has recently organised ‘peace trips‘ to Iran, amid increasing US aggression against the country.

The Canary spoke to co-founder Medea Benjamin to find out more. And she explained:

We are very upset that, under the administration of Donald Trump, he pulled out of the Iran nuclear deal, imposed new sanctions on Iran, and has led us into a very tense situation that could lead to war. So we believe that we, the citizens, must step in to try to form relationships with the Iranians. We have a delegation there right now of 12 Americans who are speaking to Iranians on all different levels – from government people to people in the street – to learn about how they feel, but also to explain that the present policy does not represent the desires of the American people and to talk to them about how we could work together to stop our government from taking us to war with Iran.

We are concerned about Iran’s human rights record, which is all the more reason to go there, talk to people, try to establish relations. We think that it’s important to be in dialogue. And we also know that, when the US government creates such a conflicting situation, this gives the upper hand to the more conservatives in the Iranian government… to those who want to crack down on human rights activists; and it really makes the situation for Iranians who are trying to reform their government more difficult.

On the dangers that the peace trips present, she said:

we are mostly there to be talking to everyday Iranian people and to learn more about the culture and the history of Iran. We understand that governments have their own interest. And we are not there to promote the interest of any government. The whole idea of ‘people-to-people’ delegations is to go beyond governments and propaganda and rhetoric, and really learn from each other.

We take delegations to many places around the world where we are not in favour of the governments. I have been to North Korea. I have been to Afghanistan, Yemen. We go frequently to places in Latin America where the governments have come to power in illegitimate ways, such as in the case of Honduras. We also have been to Egypt, where it’s been taken over by a general who has cracked down on all the human rights activists that we have worked with in the past. So we feel that it’s important to have ties with people in the universities, people in the activist community, with women’s groups, and we try to do this all over the world.

Challenging US hypocrisy regarding Iran and Saudi Arabia

She then spoke about the importance of calling out Washington’s double standards on Iran and Saudi Arabia:

sometimes, our most insightful experiences are in the tourist areas like Shiraz and Isfahan because we get to walk around more freely and interact with people in the market places, on the streets, in the universities. …

Yesterday, our delegation in Iran went to visit a Jewish synagogue and talked to people there about the fact that they have representation in the National Assembly – unlike in neighbouring Saudi Arabia, where it would be totally illegal to have a synagogue, or a church, or have open kinds of advocacy for any religion other than [its sanctioned form of] Islam.

We think it’s important to come back to the United States – where Donald Trump and his administration say one of the most important human rights issues is freedom of religion – and compare what is happening in Iran with what is happening in Saudi Arabia. That doesn’t mean we forgive Iran for the crackdown on the Bahá’í, or other human rights abuses in general. But I think it’s disingenuous for the American politicians to be criticising [Iran] and saying that it is such a major human rights abuser without talking about our great ally, the Saudis, who are just next door.

Educating people about the horrors of US economic warfare

Benjamin also highlighted the importance of using CODEPINK’s work to inform people about the devastating effects of US sanctions in Iran and around the world:

We are not able to change policy, because so much of foreign policy is now coming out of the White House and not even from Congress. But we do use our experiences to go to our congressional representatives and talk to them about how the US sanctions are affecting the civilian population in Iran – how these are 80 million people, most of whom are young, most of whom are women and children; and when we have sanctions that are so draconian, and that scare away the banks from dealing with Iran, the insurance companies, the shipping companies, then even goods like medicines – that are supposed to be exempt from the sanctions – are not exempt.

So we use our first-hand experience to go to talk about these issues with our representatives. We also tried to meet with representatives of the Office of Foreign Assets Control – it’s the entity of the US government that deals with sanctions – and to argue with them about how their sanctions are not really allowing critical medicines, and even some foods, from being shipped to Iran.

And then we do a lot of educational work. I spent this weekend at a conference where we talked about economic sanctions and how they are affecting people from Venezuela to Cuba, to Iran, to North Korea, and try to make people understand that these very stringent sanctions are actually a kind of warfare, because they are killing people. We have reports that show thousands of people whose lives have been cut short because of these sanctions, and we want the American public to understand that this is not an alternative to warfare; it’s a kind of warfare. We also want them to understand that these sanctions make an all-out military-style war more of a likelihood because – whether it’s the Iranians or in the case of North Korea – the governments there are refusing to talk to the Trump administration until they ease up on the sanctions. And so we can’t even move towards legitimate peace talks as long as those draconian sanctions continue to be in place.