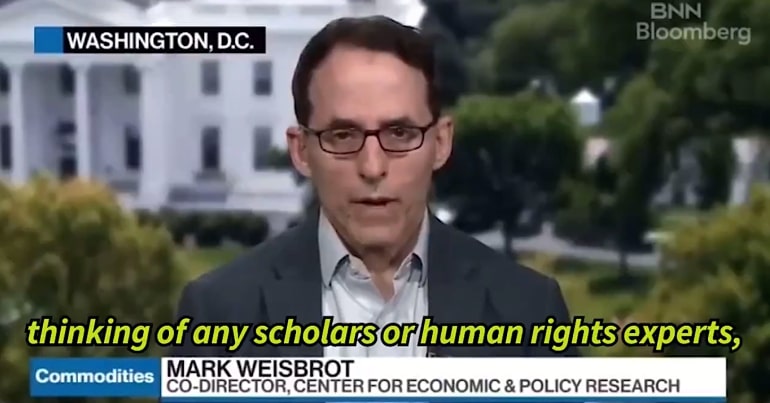 In April 2019, two leading economists at the Center for Economic and Policy Research (CEPR) produced a revealing study regarding the impact of economic sanctions on Venezuela. The economists, Mark Weisbrot and Jeffrey Sachs, estimated that US sanctions killed 40,000 Venezuelans between 2017 and 2018 and are likely to kill many thousands more as they increase. And speaking to BNN Canada, Mark Weisbrot slammed the severe lack of mainstream media focus on the brutal impact of US sanctions.

The corporate media comprehensively ignored the sanctions story. Were it about an official enemy like Russia, however, it would have undoubtedly made front-page news worldwide. The Guardian, for instance, dedicated four separate pieces to an absurd ‘Russian spy beluga whale’ story, and apparently none to the CEPR report.

The effect of US sanctions on the Venezuelan economy are rarely mentioned within the corporate media. In fact, US sanctions are seldom mentioned at all when reporting on the Venezuela’s economic crisis. This reveals the faux-concern of many Western journalists, who prefer to condemn the Nicolás Maduro administration’s economic management (over which they have little control) rather than the damaging actions of their own governments.

On 9 May, Weisbrot shared an interview he did with BNN Canada, claiming:

The world needs more journalists willing to report on how US economic sanctions are killing people in Venezuela.

In the interview, he claimed that US sanctions violate international law, adding:

that’s not just my thinking; that’s the thinking of any scholars or human rights experts. And it’s very clear [that] the Organization of American States, it violates the charter, it violates international human rights law.

These sanctions don’t really target the government. What they do is they target the people. And it’s not really collateral damage… the whole purpose of this, and [US secretary of state Mike] Pompeo basically stated this in a press conference, is to increase this suffering until there’s the kind of rebellion that didn’t really happen [on 30 April].

The world needs more journalists willing to report on how US economic sanctions are killing people in #Venezuela . Here are 2 minutes of truth on BNN Canada: pic.twitter.com/8SNt7ffnVi

Who is really the “extraordinary and unusual threat”?

because the president, when he orders these sanctions, has to say that Venezuela presents, first of all, a national emergency to the United States, and second of all an extraordinary and unusual threat to the national security of the United States. And of course, none of that is true.

Like Iran, Venezuela is surrounded by US allies and military bases. It therefore takes considerable mental gymnastics to conclude that Venezuela – a country whose military power and spending is dwarfed by that of the US – is somehow a threat to the US. Of course, ‘national security threat’ is typically an economic term for those countries reluctant to enter the blob of US capitalist control. But this makes Washington’s use of collective punishment against foreign populations no less illegal.

The corporate media’s coverage of the CEPR report suggests Noam Chomsky’s theory of ‘worthy’ and ‘unworthy’ victims is alive and well. Victims of official Western enemies are considered ‘worthy’ and receive corporate media attention; but victims of Western aggression are ‘unworthy’ and their suffering isn’t deemed deserving of news coverage. That’s why we hear incessantly about a beluga whale while 40,000 Venezuelans (and counting) are killed in silence.