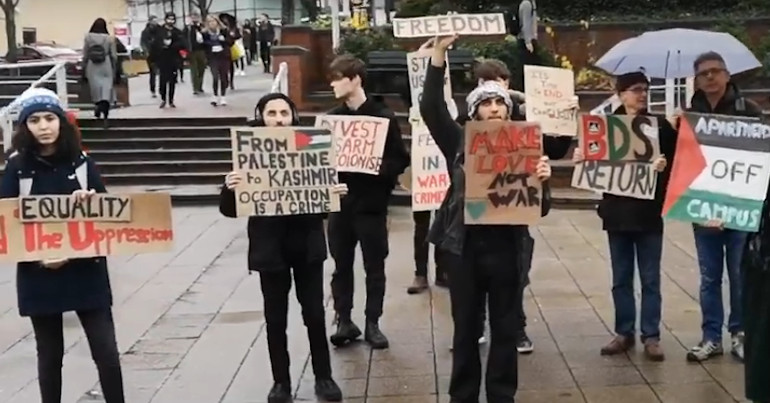 The university has gone ahead with the new collaboration despite concerns raised by its staff and students over its partnerships with Israeli companies, and companies complicit in the occupation of Palestine.

According to Nemo Abdel-Rahman, president of SHU’s Palestine Society:

I find it shameful that Sheffield Hallam University has chosen, despite our many [pleas] for it to divest, to further the normalisation of the Israeli occupation of Palestine land.

Selfit Medical’s work is being promoted as part of the university’s ‘Wellbeing Accelerator’ programme, and SHU claims that the technology developed will be beneficial for older people. A university spokesperson told The Canary that:

Partnerships with national and international businesses are crucial to the University. This partnership aims to help find health solutions for ageing populations and complies with all relevant university policy.

As a Palestinian student at SHU with a firsthand, lifelong experience of Israeli oppression, I see this as an attempt to wash SHU’s complicity in Israeli crimes and undermine Palestinians’ lives and wellbeing by defining their collaboration in humanitarian terms

Abusalama is a Palestinian student from Gaza who is currently studying at SHU. She continued:

We know too well that apartheid in Israel has infiltrated all its institutions, including the medical sector, and such medical care is a privilege that is monopolised to Israelis, while their Palestinian peers who live under the repressive military rule of Israeli apartheid are denied [medical care].

Despite the coronavirus pandemic, Israel is still reportedly restricting the transport of medical equipment into Gaza and stopping Palestinians from travelling outside the strip to access medical care.

It is extremely disappointing to see Sheffield Hallam making wrong decisions, despite our repeated calls to distance themselves from Israeli apartheid.

The [reason the] university used the time of the pandemic to go public with such a massive research grant is [probably] because students are away from campus and they think we can’t do anything about it.

In January 2019, SHU’s Student Union voted to support the Palestinian civil-society call for Boycott, Divestment and Sanctions. And in November 2019, SHU students and staff took part in a nationwide ‘Apartheid Off Campus’ day of action:

According to a statement written by SHU students in 2019:

following from the successful pass of a Boycott, Divestment and Sanctions [BDS] policy at our Student Union in January 2019, we are on a mission to move beyond words into concrete actions to ensure students’ demands are heard, and their tuition fees are not used in forging such unethical collaborations and fuelling more crimes against oppressed communities.

SHU students raised concerns throughout 2019 about the university’s partnerships with international companies complicit in Israel’s occupation. These companies include JCB, which produces bulldozers used by Israeli forces to demolish Palestinian homes. SHU also works in collaboration with BAE Systems, one of the world’s largest arms companies. According to Abdel Rahman:

Our university already has several Industrial ties with companies that unethically benefit from the apartheid state, including with JCB that was listed on the UN blacklist for companies breaking international human rights laws [in Palestine], which they have been made aware of by us.

Palestinian grassroots groups made the BDS call in 2005, as a response to the Israeli military’s continued colonisation and occupation of Palestinian land, the Israeli state’s discrimination against Palestinian citizens of Israel, and the denial of the rights of Palestinian refugees. Since then, BDS has become a global force to be reckoned with.

The situation in Palestine is critical. Because Israel’s newly formed coalition government plans to go ahead with the illegal annexation of parts of the occupied West Bank; and the Donald Trump administration in the US has given Israel’s colonisation plans the go-ahead. Meanwhile, Israel’s 13-year siege of Gaza has made the strip unliveable.

Speaking to The Canary in a personal capacity, Peter Jones, University and College Union (UCU) member and former member of Sheffield Hallam Board of Governors, emphasised the urgency of the situation:

Gaza, as a result of a cruel Israeli blockade, is now at the brink of humanitarian catastrophe and the Trump-Netanyahu ‘Deal’ proudly presents an apartheid state as its planned ‘solution’ to the status of Palestinians – a plan about to become a reality through the new Israeli government’s annexations of Palestinian territory.

Jones criticised SHU and other universities for not listening to the concerns of staff and students:

Sheffield Hallam has admirable stated commitments to ethical principles but both students and UCU have raised cases of existing partnerships which appear to directly contradict these, and such cases, including the newly announced relationship with Selfit Medical, should be scrutinised urgently. Meaningful and open dialogue with students and staff on these issues is an essential contribution to the University’s values and mission.

‘We will not stop until apartheid is off campus’

SHU thinks it can hide its new form of complicity because for once the end product is medical instead of weapons, but we see past the facade and demand that ties be cut with this new start up. We have the backing of other students and societies and we will not stop until apartheid is off campus!

Tom is also a researcher for Corporate Occupation. Twitter: @CorpOcc