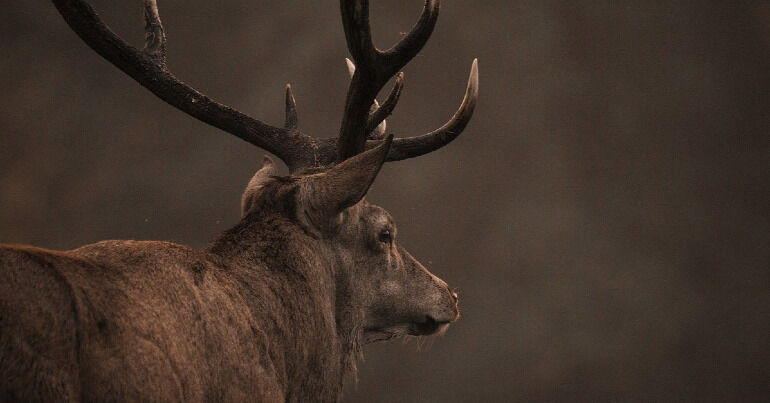 Content warning: this article contains graphic descriptions of animal abuse that some readers may find upsetting.

The National Trust is appearing a lot in the news, most recently for its conservation efforts in reintroducing beavers to Exmoor, and also for suspending the trail hunting of foxes on its land. These are seemingly positive actions from one of the UK’s biggest landowners. But as The Canary recently reported, temporarily suspending trail hunting is doing far too little. It is a token gesture to divert the public from the fact that, to this day, it has continued to licence fox hunting.

But the National Trust also ignores another barbaric ‘sport’ taking place on its land. This sport is stag hunting.

What exactly is stag hunting?

Stag hunting involves a terrifying chase, hours-long, with hunters using quad bikes, motorbikes and hounds. It takes place twice a week – Covid lockdown rules permitting – on Somerset’s Quantock Hills and in other locations in the south-west.

The Quantocks are owned by various landowners, including the National Trust and the Forestry Commission. Their designation as an Area of Outstanding Natural Beauty doesn’t protect their wildlife. Mature stags have been hunted to such an extent on the Quantocks that there are only six left. Yes, you read that correctly: there are six mature stags left at the time of publishing this article.

Bobbie Armstrong is a monitor for Somerset Wildlife Crime. She describes stag hunting as “Somerset’s very own trophy hunting”.

Armstrong told The Canary exactly what happens on a typical stag hunt in the Quantocks:

When the stag is running, there are between 10 and 50 people in vehicles – in 4X4s, on quad bikes and motorbikes –  who will park themselves up on the high land. The huntsman and hounds will go in to try and pick up a scent. The field riders, which can be between 6 and 30 people, follow on behind. Since the [hunting] ban was brought in, they went from using a pack of hounds to using two hounds, and compensated for that by using the umpteen supporters, on quad bikes and motorbikes, all hunting the stag.

One of the most distressing parts of the day is knowing that the stag can’t evade the well coordinated efforts of people in these vehicles, on hand-held radios, to keep pushing him out into the open. There’s a pair of eyes looking through binoculars on every high point on those hills. There isn’t a moment when they haven’t got eyes on him.

Armstrong explained that around ten of the hunters carry firearms. “They’re an incredibly violent bunch,” she said. “It’s lawless. It’s like the Wild West.”

The stag usually runs to water when he is exhausted. Very quickly, he is surrounded by hunters on quad bikes and on horseback. Armstrong explained what happens next:

They all want to be the first to get down to the kill. It’s horrific. The stag is exhausted, his eyes are bulging, he can’t even hold his head up. And they all turn up and want to be the one to jump on him, grab hold of his antlers, wrestle him and literally sit on him while they wait for a gun carrier. They will then shoot him and cut his throat. Actually, this is their preferred method of killing. If they could get away with it, they wouldn’t even bother shooting him.

They will load him onto the back of a quad bike, or they will get a truck with a closed cab on the back, chuck him on the back and take him off to the nearest farm.

Armstrong explained that various parts of the stag are used as trophies. The head, with its antlers, is worth a lot of money. The hunters also take his slots – the hooves and the bottom part of the leg – which they chop off and mount on a wooden plaque. The teeth are also taken as mementoes. Armstrong expressed her disgust:

The animal is butchered. The landowner whose land the stag came from generally gets the heart. The hounds get the entrails. They hack the stag up and dish it out. The huntsman is there, up to his elbows in blood, and they’re all there salivating, delighted at taking part and enjoying their spoils. And they don’t like being filmed. They don’t like being caught at the carve up.

You might be wondering whether this practice is legal. The short answer is no. The police and courts know what’s going on, but the hunters get away with it anyway. The hunting ban means that an animal should never be pursued. According to the law, it can only be ‘flushed’ out and shot to protect crops, or to relieve it of suffering. It can also be killed in the name of ‘research‘.

Just like fox hunters, if challenged, the stag hunters also rely on the argument that they’re trail hunting: that their hounds are following an artificial scent and not a real stag. But no trail hunting of stags is officially permitted on National Trust land.

Despite this, stag hunts are still receiving hand-outs from the government.

[Before the second lockdown] we received an account from a local resident who told us that the Quantock Stag Hounds has killed a huge stag on National Trust land. To date, the National Trust have denied this, yet they have also stated they have carried out no investigation into the incident!

They won’t even put a stop to unlicensed illegal activity that they know about, going on on their land, twice a week, that they’ve had absolute proof of, in court.

The Canary contacted the National Trust for comment but had not received a reply at the time of publication.

The Quantock Deer Management and Conservation Group carries out an annual deer count every March. As the group consists of the very people hunting the deer, the term ‘conservation’ should be taken with a pinch of salt. Even so, the group admitted that there were just nine mature stags left on the Quantock Hills that spring. Since then, more stags have been murdered in the name of trophy hunting.

The desire to take the biggest and best specimen has driven the number of mature stags to an all time low. On 1 March the count showed nine stags of over four years of age. Since then the Quantock Stag Hounds have killed three more, and that’s just three that we know of!

Soon there will be no stags left on the Quantock Hills. We know it, the locals know it, and I suspect the Stag Hounds know it too, hell-bent on satiating their blood lust down to the very last drop.

There are organisations on the hills who should be horrified by this; organisations like the National Trust who continue to fail in enforcing the ban of stag hunting on their land.

Put pressure on the National Trust to enforce a ban

Armstrong told The Canary that the hunters have been getting away with it for so long that they’re “completely cocksure of themselves”. She knows that the police can’t be relied upon to prosecute:

As a police officer pointed out to me, [the hunters] ‘have very deep pockets and influential friends’. When that’s coming to you from a copper, you have to wonder how we’re ever going to get movement on this… Front-line officers know why cases aren’t being taken. That’s because the people at the top of that chain of command don’t want them to be.

So it’s down to the public to put pressure on landowners like the National Trust and the Forestry Commission to enforce the ban, and to pressure organisations like Natural England – which jointly manages the Quantock Hills – to take steps to ensure that those who break the law are prosecuted. Soon there’ll be no mature stags left on the Quantocks. We should be outraged and we need to act now.