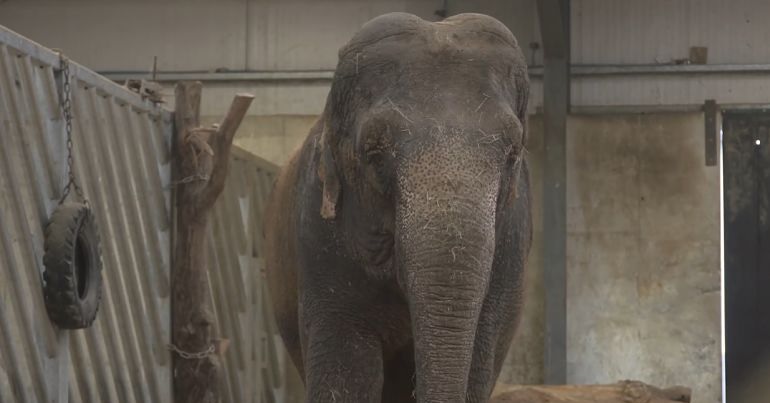 Dozens of experts have thrown their weight behind calls for giving the ‘UK’s loneliest elephant‘ her last chance for companionship.

Anne, who currently resides at Longleat Safari and Adventure Park, hasn’t seen another elephant for 19 years. A French sanctuary has offered her a home, opening up the possibility of her spending the remainder of her days with her own kind. Action for Elephants UK (AFEUK) has been calling for Longleat to allow Anne to have an independent assessment to ascertain her suitability for such a move. The safari park hasn’t yet, however, agreed to that request.

Now the Pro Elephant Network (PREN) has written an open letter in support of that call.

As The Canary previously reported, Anne has been part of Longleat’s safari experience since 2011. Prior to that, Bobby Roberts’ Circus used her for entertainment until Animal Defenders International (ADI) exposed that circus staff were violently abusing her. ADI also supports Anne’s potential move to the sanctuary. People reportedly tore her from her mother as a baby in Sri Lanka and transported her to England in the 1950s, where she spent 50+ years working in circuses before going to Longleat.

Elephants are highly social beings, like humans. So the UK has rules concerning their isolation in captivity. The Zoo Licensing Act 1981 states that “Female elephants must have social contact with other elephants at all times”.  According to the Elephant Welfare Group (EWG), an entity administered by the British and Irish Association of Zoos and Aquariums (BIAZA), there are “rare, specific, defined circumstances” where it may be considered appropriate for venues to house an elephant alone. Anne appears to have been designated one such case due to her “age and nature”.

But the Elephant Haven European Elephant Sanctuary (EHEES) in southern France, the first elephant sanctuary in Europe, has offered Anne a home. It’s a new sanctuary, founded by Sofie Goetghebeur and Tony Verhulst, who both previously worked at Antwerp Zoo. Due to being new, the sanctuary does not have any elephants residing there presently. But it’s undoubtedly only a matter of time before individuals among Europe’s remaining zoo, safari park and circus elephants get the chance to retire to the 70+ acre peaceful location. Ultimately, it just needs someone to step up to the plate and make the first move.

AFEUK has been calling for Longleat to allow Anne to have an independent assessment to determine whether a move to EHEES is suitable for her. It is supported in that call by Born Free and Four Paws. Now dozens of experts have added their voices to the cause.

PREN describes itself as a “global community” of individuals and organisations, from “western academies” and the “indigenous paradigm”, with expertise in “the fields of science, conservation, animal welfare, economics, community leadership, social justice and the law”. Over 40 members of that community have signed the open letter about Anne’s situation. Addressed to Longleat’s leadership, environment minister Zac Goldsmith and South West Wiltshire MP Andrew Murrison, the letter states that the signatories “support the call” for:

an independent professional assessment of Anne’s physical and mental health and current situation, in order to establish whether she is able to be moved, and if so whether a move would be beneficial to her long-term health and well-being.

The signatories have also called for Longleat to take “short-term action” to “improve enrichment” for Anne in her current situation. They say that her current caretakers should provide “a swimming pool, scratching opportunities, shade and mud wallow that she can actually utilise” regardless of whether Anne moves to EHEES or not.

They also said Longleat hasn’t “ruled out” Anne moving to another home. But they asserted any decision to do so “must be based entirely on her specific needs and welfare”. The spokesperson commented:

The reality of her situation now is that she is a very elderly elephant with significant underlying, as well as age-related health issues, the latter of which will sadly not improve.

In addition to physical and mental abuse from her previous ‘keepers’, there is also evidence she was bullied by the elephants she was kept with. The dangers now of attempting to mix her with other elephants are, in the opinions of numerous independent welfare experts as well as the team who care for her, extremely high.

Longleat would not, however, reveal to the Independent the identities of the experts it referred to. The Canary asked Longleat for comment on PREN’s letter. It did not respond by the time of publication.

A spokesperson for the Department for Environment, Food and Rural Affairs (Defra) told The Canary:

“We take the welfare of captive animals very seriously and there’s a robust licensing regime in place to ensure animals are cared for to the very highest standards.

Government appointed veterinary inspectors, selected because of their in-depth knowledge of caring for captive animals, make regular welfare assessments at zoos and no concerns have been raised about the quality of care provided in this case.

The Canary recently spoke to biologist Keith Lindsay about Anne’s situation. He has over 30 years experience in elephant research and conservation and also sits on the advisory board of EHEES.

Lindsay believes that we should “look to the wild” to determine what captive elephants need and recognise that they “evolved in an ecosystem”. Anyone tasked with their care should, he says, bring “as much of what they do in the ecosystem to their life”. He pointed to two core aspects of their evolutionary character in particular, relating to their spatial and social needs. On the first, he said:

He noted that they move to find food but highlighted that:

They evolved to walk and to search. So their minds are made to search and remember where food is, where water is… and where the risky places are.

Secondly, regarding elephants’ social capacity, he explained that in experiments where people have played back different elephant calls to them:

In short, Lindsay argued that elephants should have ample and varied space to roam and the option to socialise with as many other elephants as possible. It’s imperative they do so, he suggested, not just because they’ve shown themselves to be capable of sociability and long-range movement in their natural environments but because that is who they’ve evolved to be – epic travellers and great socialites are now, in essence, who they instinctively are.

Lindsay described Longleat as being “such a small place”, in relation to an elephant’s natural range. He also raised Britain’s climate as an issue because the cold weather means spending a lot of time indoors for Anne. He asserted:

Standing around in a stall is just no good at all for an elephant.

He said that captive facilities do often offer enrichment to try and “make up for this lack of interesting environment”. He also acknowledged that Longleat has attempted to make Anne’s enclosure “better”. But he concluded “it’s not enough”.

Meanwhile, sanctuaries approach elephant care from the perspective of “how close can we get” to their natural environment, Lindsay asserted. He also talked about what environment would greet Anne at EHEES:

[The sanctuary] is on a slope – even that is good for an elephant, to walk on an incline. There’s grass where they can forage, which is what they do… within a short time an elephant would get to know the 70 acres that they’ve got there but at least.. [there are] different places they could go.

Furthermore, Lindsay argued that while a sanctuary environment would offer Anne the chance to be sociable, as per her evolutionary needs, it would also be a space where bullying could be avoided:

Elephants in the wild aren’t bullied because if they are bullied they just don’t go near the elephant who’s bullying them. They avoid them, and they can do that. Elephants in a sanctuary with reasonable sized compounds just avoid the bully.

The biologist said that in a more confined situation – like elephants typically have in zoos and circuses – such avoidance wouldn’t be possible because “there isn’t enough space”. EHEES has also released a statement on the measures it has in place to avoid bullying at the sanctuary.

In short, Lindsay suggested that sanctuary life could offer Anne both space and companionship, while being able to deal with some of the issues that Longleat says it’s concerned about. Reflecting on her current situation, Lindsay said:

All I can conclude is that her life is pretty empty… if you have a brain that’s evolved to be dealing with social complexity pretty much all the time and environmental complexity… and you take away all that challenge, then they’re stuck inside that

Anne now has the chance for relative freedom, not from total captivity but from the social and environmental restraints she’s endured for most of her human-dictated life. An independent assessment could ultimately conclude she’s not in a physical or mental state to take up that opportunity. But we humans owe it to her – not least because of the years of ‘entertainment’ she’s given us – to explore that possibility to its fullest.