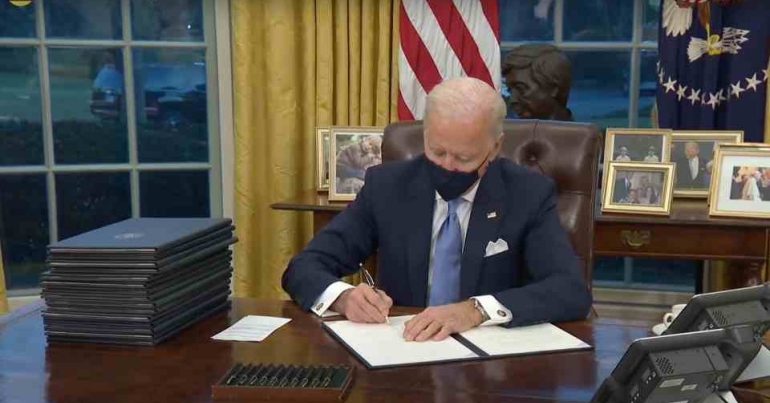 On 20 January, two weeks after a mob of Trump supporters stormed the US Capitol, Joe Biden was sworn in as the 46th President of the US. Taking place in the midst of a pandemic, it was an inauguration like no other.

The president began his inauguration speech on the topic of democracy, saying:

This is America’s day. This is democracy’s day. A day of history and hope.

We’ve learned again that democracy is precious. Democracy is fragile, and at this hour, my friends, democracy has prevailed.

Biden’s overarching message was of unity and the need to come together was a key theme of his speech:

Our history has been a constant struggle between the American ideal that we all are created equal and the harsh, ugly reality that racism, nativism, fear, demonisation have long torn us apart.

We can join forces, stop the shouting and lower the temperature. For without unity there is no peace, only bitterness and fury. No progress, only exhausting outrage. No nation, only a state of chaos. This is our historic moment of crisis and challenge, and unity is the path forward.

The event looked a little different as supporters were encouraged not to attend the ceremony to prevent the spread of coronavirus (Covid-19). The traditional procession to the White House was replaced for the first time by a virtual ‘parade across America’.

Outgoing US vice president Mike Pence was in attendance, but outgoing US president Donald Trump was the first president since 1869 to skip his successor’s inauguration ceremony.

Kamala Harris was sworn in as the US’s first female, first Black, and first South Asian American vice president. She was sworn in by the Supreme Court’s first Latina justice, Sonia Sotomayor.

It's an honor to be your Vice President. pic.twitter.com/iM3BxJzz6E

Meanwhile, 22-year-old Amanda Gorman became the youngest poet to perform at an inauguration:

Biden’s break with the Trumpian past

Biden began his presidency by signalling a break with the Trumpian past. He has already set to work in the Oval Office signing a series of executive orders including re-joining the Paris climate change accord. World leaders have welcomed this first step.

Biden plans to push for 100m vaccine doses in his first 100 days in office, and has urged people to wear masks. He will also re-engage with the World Health Organisation. These are welcome objectives during a week in which US deaths from coronavirus passed 400,000.

Biden will also end Trump’s travel ban on people entering the US from predominantly Muslim countries. Meanwhile, the vice president has sworn in three new Democratic senators, giving the Democrats a slim majority in both houses of Congress.

The incoming president inherits a myriad of challenges –  an ongoing pandemic, an economic emergency, extreme racial tensions, and a severely divided nation. The US has a long road ahead, but Biden’s inauguration seems to indicate a step in the right direction.

Featured image via The White House/YouTube.