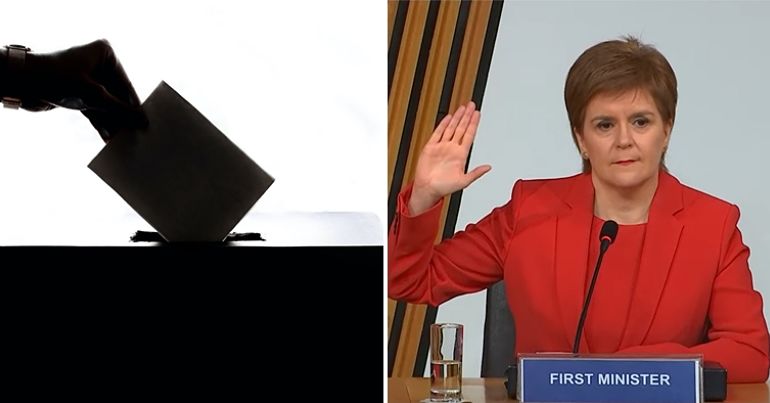 The Canary‘s #Independence2021 series explores issues relevant to independence in Scotland and Wales in the run up to May’s elections. This edition looks at the potential effect that a report into the “handling of allegations of sexual misconduct against Alex Salmond”, during his time as Scotland’s first minister, could have on independence in Scotland.

Because, as Derek Macpherson of Scotland’s Action for Independence (AFI) told The Canary, Scottish independence ‘doesn’t depend on any one person’. And to view it as such is “pretty blinkered”.

This goes way back

It’s a long game we’re playing here, with Scottish independence. Basically I see it as a 1,200 year struggle that we’ve been in.

I don’t think the majority of Scots see independence as being dependent on any one politician. I think Westminster would like to think it’s that way… but people see it as a much broader and deeper issue than that

The SNP isn’t the only “vehicle” for Scottish independence

In that light, the current controversy surrounding the report may not negatively affect the movement for independence at all. In fact, support for Scottish independence has been growing for some time. And while Macpherson admits we may see ‘fluctuation in the polls’ because of the inquiry, it still remains to be seen if it will negatively affect this May’s “independence election“. In any case, Macpherson claims that for the majority of the Scottish electorate:

Independence is an unalloyed good. Regardless of who might be leading the movement at the moment.

An idea must stand or fall on its own merits. And that’s something the majority of people see, that independence is an idea that does stand on its own.

Are these guys really giving Sturgeon a lecture?

Opponents of Scottish independence have gone for the jugular on this one. But those efforts are unlikely to derail independence. Because calls from the Conservative Party for Sturgeon to resign are an exercise in barefaced hypocrisy.

While misleading parliament is clearly wrong, the Tories are in no position to be pointing fingers. Especially given Boris Johnson’s disregard for transparency and secrecy over private donations. And while the irony of that may be lost on unionists, it’s not lost on others.

Moreover, Labour Party leader Keir Starmer showed a similar level of hypocrisy when he decided to pitch in. Starmer called on Sturgeon to resign. However, he appears to have no problem letting Tory wrong-doing off scot-free.

However, a crucial report by James Hamilton QC could inflict more damage on Sturgeon. Hamilton investigated whether Sturgeon breached the ministerial code. If his report finds she did, Sturgeon will be under a lot of pressure to resign. Although, for now at least, it seems unlikely she will.

The Canary asked the SNP to contribute to this feature, but it didn’t respond by the time of publication.

“They’re not synonymous at all”

Also, it may not just be Sturgeon’s detractors who need reminding of the reality of SNP’s significance to Scottish independence. Because as Macpherson said:

that’s possibly a mistake the SNP sometimes make themselves. Is that they see themselves as synonymous with the independence movement. They’re not. They’re seen as a useful vehicle, certainly, but not the sole vehicle. And the two things are not the same, they’re not synonymous at all.

So regardless of either report’s outcome, or whether Sturgeon survives as first minister, the idea and movement for Scottish independence will continue.