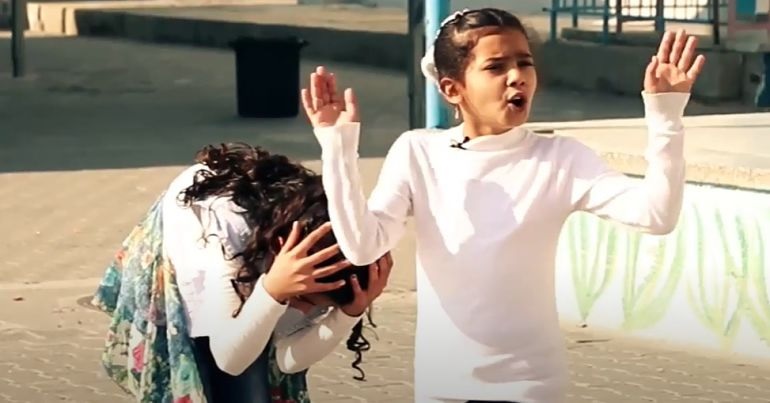 Despite the intense violence Palestinians are currently facing, pioneering children and teachers from the country are trying to make sure Israel’s bombs don’t silence their voices. Through a UK charity called the Hands Up Project, they have been sharing their stories with people around the world during the current assault.

As teacher Diana Abu Khaled said during a recent radio interview, the Hands Up Project is “one of the bridges and the windows that connects Gaza to the other worlds, this helps us to feel that we aren’t living in an island”.

Israeli historian Ilan Pappé explains in his 2017 book Ten Myths About Israel that the Gaza Strip “amounts to slightly more than 2 percent of the landmass of Palestine”. He says it’s a zone that Israeli forces “pushed hundreds of thousands of Palestinians” from Jaffa and elsewhere into between 1948 and 1950, during the violent creation of the state of Israel. Pappé thus describes Gaza as “the biggest refugee camp on earth”.

Intensive Israeli bombing of Gaza since 10 May has left tens of thousands of people there without a home. The UN said 72,000 people were displaced by 19 May due to the crisis. These people are either “seeking protection” in United Nations Relief and Works Agency (UNRWA) schools or “staying with host families”, according to the UN. The death toll in Gaza, which Israel has illegally blockaded since 2007, stood at 230 people – 65 of them children – by 20 May. Israel has also seen fatalities as a result of rocket fire from the Gaza strip, with 12 people, including two children, killed by the same day.

The exchange of fire between Gaza’s governing group Hamas and the Israeli military started on 10 May after a series of provocations, and the threat of possible war crimes, by Israel in Palestine’s East Jerusalem and the Old City of Jerusalem. Israeli forces, for example, raided Al-Asqa mosque multiple times. As the New York Times says, this is “one of the holiest sites in Islam”.

Tensions have erupted throughout the region in the subsequent days. The events have also provoked a display of Palestinian unity against the Israeli government’s disproportionate violence and enduring occupation with many people joining together in a general strike on 18 May.

Israel has occupied Palestine’s East Jerusalem and West Bank – along with the Syrian Golan Heights – since 1967. As The Canary has previously reported:

Since then, it has established hundreds of colonies on the lands it has occupied. These colonies, known as ‘settlements’ are illegal under international law.

Throughout all this Palestinian teachers and children – a number of them living in Gaza under Israel’s daily bombardments – have been meeting online to share stories.

They are all participants in the Hands Up Project. Started in 2016, the initiative aims to connect “children around the world with young people in Palestine”. It uses “online interaction, drama and storytelling activities” to enable “the use of creativity and self-expression to promote mutual understanding, personal growth, and the development of English language skills”.

The project’s founder Nick Bilbrough began doing school-based storytelling sessions in Gaza and the West Bank in 2016. Subsequently, the initiative started hosting sessions online whereby story-telling volunteers from around the world can remotely link up with Palestinian children in their classrooms. In the sessions, Palestinian teachers coordinate with Hands Up volunteers to create the storytelling activities, games, and other exercises for students.

As the Hands Up Project website states, the children involved in these sessions were “so engaged that they started telling stories too”. So the project expanded, creating an annual playwrighting competition. Palestinian children have written nearly 500 short plays for the competition so far. Every year, the project also publishes a book of their plays.

But many of these young people live in a situation where they have “no theatre to perform it in and no audience to watch it”. So to ensure the young people’s plays are seen and heard, the Hands Up Project facilitates ‘remote theatre’ performances of their work. Bilbrough told The Canary that Palestinian children are essentially the pioneers of this remote theatre, as it’s a performance medium born from and for the oppressive conditions they endure.

Students performed the following play called Welcome to Earth to mark Earth Day 2021 prior to the current outbreak of intense violence:

Bilbrough says the following play is called Hands Up. It’s a play about magic, generosity, and children all around the world raising their hands up and saying “Enough! We are here. Please keep us safe”. The Hands Up founder says the students performed this play at one the schools Israel reportedly warned it would strike in the current bombardment:

In a further play called We will wait until they open the gate!, children play characters such as elephants, rabbits, and horses who are trapped behind ‘the gate’. The horse explains that the unidentified gatekeepers must “open the gate, so we can have freedom, food, water, knowledge, and medicine, [so] we may have our right to live as others live”:

The project has also helped teachers to set up drama clubs in schools across Palestine. It has plans to open a theatre centre in Gaza too. Due to Israel’s illegal blockade, the electricity supply there is limited and the internet patchy. So a dedicated theatre centre would be a space all participants in the Hands Up Project in Gaza could rely on for power and connection to the outside world when they need it.

Since 10 May, the project has provided an important ‘bridge’ between people in Palestine and the outside world, as Khaled suggested. It’s been a place where children from schools elsewhere on the planet can send their solidarity and love to Palestine:

The project has also been sharing plays from Palestinian children that give people insight into the horror they’re currently facing. One such play is called Toothbrush, about Israeli bombs raining down on Gaza in 2014:

Palestinian teachers and students have been addressing the current violence during online sessions too. During a broadcast on 14 May, for example, a young girl called Jeena told a story about the situation. She talked about the Palestinian families in Sheikha Jarrah, East Jerusalem facing expulsion from their homes due to discriminatory Israeli law. The UN says forced evictions of the families there “may amount to war crimes”. Jeena explained that:

Gaza standed with Sheikha Jarrah houses and support them to stay strong. Suddenly, Israel sends a hundred of rockets. There’s so many victims, some of them are kids, woman, old people.

Jeena concluded by saying that “we will keep hope that we will gain our freedom”.

An English teacher shared the story of her own children’s response to the bombing. She said her four-year-old daughter saw airstrikes and thought they were shooting stars and fireworks. So the young girl told her little sister to “make a wish”. Their mother Ola said she “didn’t know what to do, should I laugh, or cry, or erupt”.

On 21 May, the Hands Up Project is hosting an online celebration for the UN’s World Day for Cultural Diversity for Dialogue and Development. During the event, Palestinian and Ukrainian children hope to do a live performance of a play about intercultural dialogue called Lemon and Mint. It will also include a discussion titled “two heads are better than one”, about the value of team taught sessions. Bilbrough says that directors of the the British Council in Palestine should be in attendance.

Everyone is welcome to tune into that event, which is taking place at 8pm Palestinian time or 6pm UK time, on the Hands Up Project’s Facebook page. Indeed, the project provides daily inspirational opportunities for Palestinians and people around the world to stay connected and in solidarity amid the current onslaught.

During a recent live ‘educational chants’ session, one storyteller read a particularly poignant poem by Maya Angelou. It epitomises well the determined spirit among Palestinian children that the Hands Up Project is amplifying each day:

You may write me down in history, With your bitter, twisted lies, You may trod me in the very dirt, But still, like dust, I’ll rise.