Over a thousand Tigrayans demonstrated at the G7 summit last weekend, here's why - The Canary 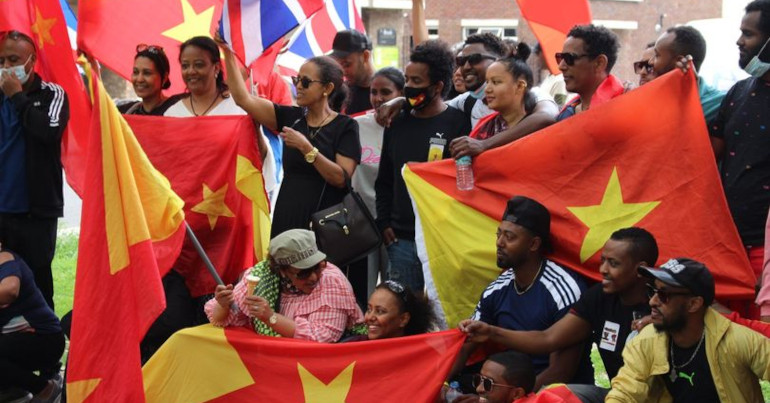 On Saturday 12 June, over a thousand people from the Ethiopian state of Tigray protested in Falmouth outside the G7 media centre. We spoke to one of the demonstrators to find out why.

The Ethiopian state is engaged in a genocidal attack on the Tigrayan people in an attempt to stamp out their demands for regional autonomy.

M Tesfay was one of the demonstrators in Cornwall on Saturday 12 June. He told The Canary:

Tigray is an Autonomous and Self-governing Regional National State in the Federal Republic of Ethiopia.The population of Tigray is estimated 8 million, which is 7.5% of the population of Ethiopia. Tigray is composed of 98% Christians and 2% Muslims, and is home to Ethiopia’s ancient civilisations dating back two millennia.

The roots of the current war

Tesfay explained the historical roots of the current war against the people of Tigray:

Ethiopia, an empire state comprising 80 plus distinct nationalities (ethnic groups), underwent a major revolution in 1974 when an ancient monarchy (where Emperor Haileselassie was the last monarch) was overthrown and a republic was proclaimed.

No sooner was the monarch overthrown when the revolution was hijacked by a Military Junta (known as DERG and led by Colonel Mengistu Hailemariam) that allied to the then USSR and ruled for 17 years. After 17 years of armed struggle by multiple national liberation fronts including the Tigray Peoples Liberation Front the Military Regime was overthrown in 1991 and a Democratic Federalist Constitution was enshrined in 1994. A broad democratic nationalist front known as the Ethiopian Peoples Revolutionary Democratic Front (EPRDF) ruled for 27 years by winning six successive general elections. The EPRDF, coming to power post the Cold War and the USSR, was non-aligned and registered successful economic development and social cohesion, although it also registered significant democratic deficit.

The present regime, led by Abiy Ahmed Ali, came to power in 2018 after usurping power within the EPRDF. Soon it began to undermine the Federalist constitution of the country by overcentralising power and by undermining the autonomy and self-governing status of the Regional National States including Tigray. This means nationality groups rights to hold local elections and self-governing rights were seriously curtailed. Moreover, most of the ills of the country’s that were overthrown by the 1974 revolution and the 1994 democratic federalist constitution have been reinstalled. In effect the Abiy Ahmed Regime is a right-wing and restorationist regime. Unlike the EPRDF’s “democratic developmental state”, the present regime in Ethiopia pursues neo-liberalist domestic policy and is “dependent” in its foreign policy.

We asked Tesfay what he meant by “restorationist”; he said that the the Ahmed regime wants to restore the past status quo of:

The war began after Tigray held a regional election in 2020, in defiance of the Ethiopian regime. According to Tesfay:

The ongoing war in Tigray began on 4 November 2020 after Tigray held its regional election in September 2020 that was unconstitutionally forbidden by the Abiy Ahmed regime at the centre. Tigray defence of the democratic federalist constitution was also another major reason for waging the war against Tigray.

The Ethiopian regime brought in allies from Eritrea and the United Arab Emirates (UAE) to support its military campaign in Tigray. Tesfay gives a chilling description of the tactics used in the assault against the people:

The war on Tigray is brutal and total and is designed and executed to completely subdue the people. The Ethiopian regime invited the armies of Eritrea, Federal Republic of Somalia, and the Amhara Regional governments as well as the armament of the United Arab Emirates into its war in Tigray. On paper it is like crushing a nut by sledge-hammer.

In the war on Tigray hunger, starvation and famine is used as stratagem of war. The armies that have occupied Tigray deliberately hinder humanitarian assistance from reaching 5.2 million people who are on verge of starvation and famine. Gender-based violence and rape is used as an instrument of war. To date over 22,000 women and girls have been gang raped by the occupying armies of Ethiopia, Eritrea and Amhara. These data are backed by multiple and credible [sources].

Tesfay explains how the war on Tigray is genocidal:

The war in Tigray is genocidal because it is deigned to destroy a minority nationality (ethnic group) through a stratagem of total war including the weaponisation of hunger and famine, gender-based systemic and widespread sexual violence and rape to fundamentally change the demography of Tigrayans, Ethnic targeting and cleansing of millions of Tigrayans. These are in addition to war crimes and crimes against humanity being committed in Tigray.

The Canary asked Tesfay why Tigrayans chose to protest at the G7 conference:

The Mekete Tigray UK, UK citizens and residents of Tigrayan and Ethiopian origin, were protesting to urge the G7 countries to help end the war in Tigray, in particular the weaponisation of hunger and famine and gender-based violence and rape against Tigrayan women and girls. The G7 countries are major aid donors of the Ethiopian regime (totalling several billions per year) as well as providers of war armaments. We also believe the G7 Countries were supporters of the regime in Ethiopia, although that support is now seriously being eroded. But we still believe the G7 countries have not yet taken concrete and decisive actions to stop the war in Tigray. They still appear to appease the regimes in Ethiopia and Eritrea.

The number of people who came to the protest is estimated 1500. They came from all parts of the UK, including London, Birmingham, Manchester, Liverpool, Leeds, Bristol, Scotland, Wales and Northern Ireland. Most were Tigrayans but also include people from other parts of Ethiopia including Oromia. Many Eritreans (who are opponents of the Eritrean regime) also came to show their solidarity with Tigrayans. Similarly, some British supporters came to the protest.

The Canary asked Tesfay what demands Tigrayans are making of the G7 countries. He said:

The key demands of the protest are for the G7 countries to take concrete actions, using their economic, financial, diplomatic and military leverages [to promote]

We asked Tesfay to describe what happened at the protest. He told us:

We gathered by the sea-side with banners and slogans to send our messages. We then marched through the mains street of the town centre towards the G7 Media Centre. A petition to the G7 Summit was read (an email had already been sent). Speeches were made. Leaflets distributed. Interviews were given including to the BBC and other media outlets. [We] met many local people who were very keen and wanted to know what was happening in Tigray and Ethiopia. The impression was they did not know about Tigray or what is happening in Tigray, since it has not been adequately reported in the British media. Many were sorry about the unfolding catastrophe in Tigray. Many said they would follow developments and asked how they could help. The Tigrayan protesters met other protesters from Uganda, Myanmar, Extinction Rebellion and others with view to knowing and learning about other issues as well.

History is repeating itself

The Canary asked Tesfay what is going on now in Tigray. He said:

The war is on-going with increasing intensity and ever more horrors and catastrophes happening. Although some humanitarian assistance has reached to a tiny minority of the affected people, Tigray is on a verge of a famine similar in scale and magnitude to the 1984/5 famine in Ethiopia, who was then the major victims. Unfortunately, history is repeating again, and the world is unable to stop it.

We asked Tesfay whether there was anything he would like to ask ordinary people to do in solidarity with those facing genocide in Tigray. He replied:

We strongly believe ordinary people can help by showing their solidarity and by pressing the UK Government to help end the war. The UK government has huge leverage vis-à-vis the Ethiopian regime that it could use to pressurise the regime to end its genocidal war against Tigrayans and by demanding the investigation of the credible allegations of war crimes and crimes against humanity being committed in Tigray. People could write to their MPs, faith leaders, trade union, mass movements, pressure groups and political organisations to raise awareness of what is happening in Tigray, Ethiopia, and more importantly to campaign to end the unfolding catastrophes. I remember Band-Aid as a teenager in London and the generosity of the British public. I do not want another Band-Aid. By then millions will have died. The point is to act now so that we would not need another Band-Aid.

Tigrayans are calling for support in their struggle for survival and autonomy. They are calling for us to act now. But the genocidal war against them is not being adequately reported in the mainstream media. It’s up to us to educate ourselves, and to listen to their urgent calls for solidarity.