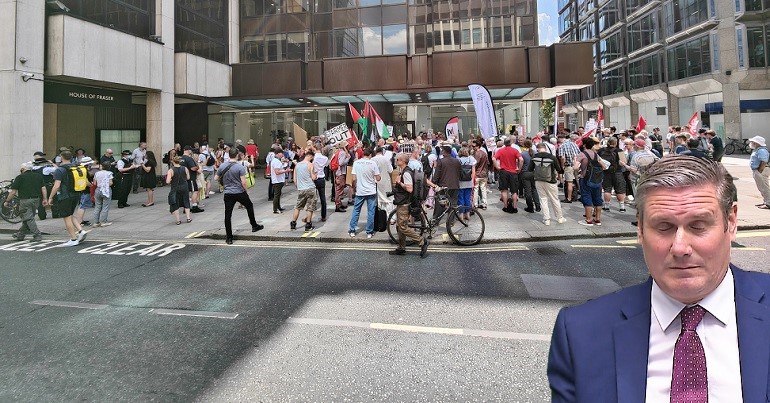 Poor Keir Starmer. Not only are his party’s finances reportedly down the toilet; not only is he having to self-isolate, but Labour HQ was the site of a protest on Tuesday 20 July. Starmer may well be glad he’s holed up at home.

As The Canary previously reported, Labour planned to ban four groups involved in the party:

SKWAWKBOX noted that the banning of these groups would make:

But the groups and members were not taking the news lying down. So, on 20 July, several of them organised a protest.

It took place right outside Labour HQ in central London: 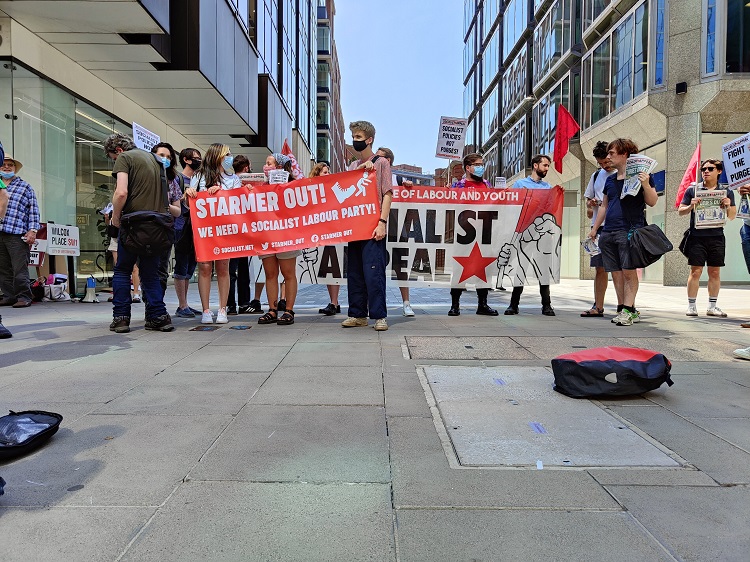 Several hundred people from around the UK turned up: 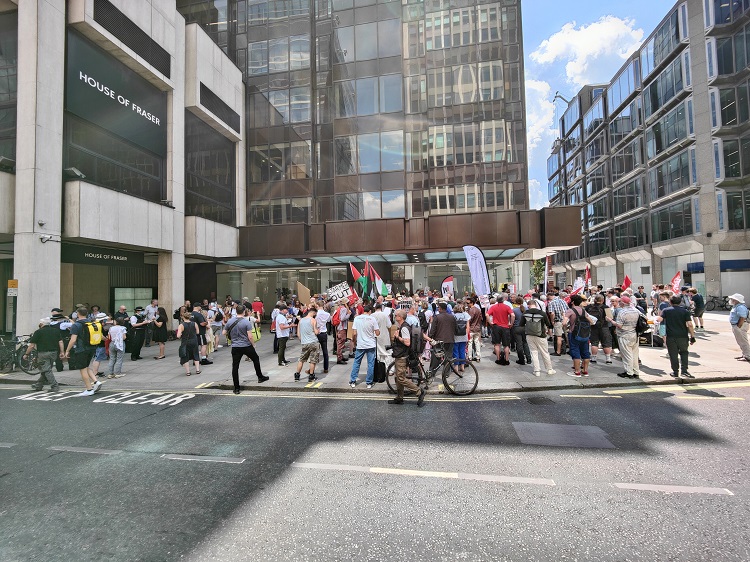 Socialist Appeal, LIEN, Labour against the Witchhunt, Jewish Voice for Labour (JVL), and Labour Black Socialists were all there. What stood out was the broad age-range of activists, from young to old and of many ethnicities. Various people spoke, including former South African MP Andrew Feinstein: 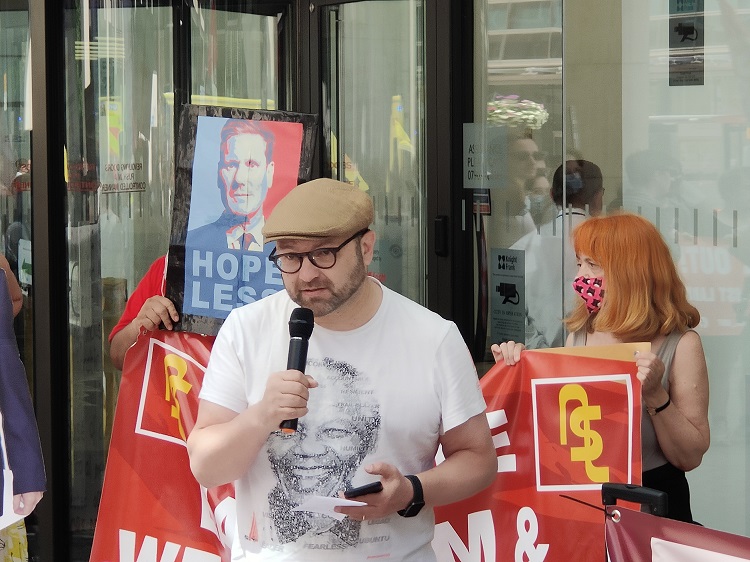 “Resist… by all means”

We’re certainly going to fight this purge. I think the whole left needs to come together and resist this by all means… Apparently, [fighting for public services] makes us “toxic”, as they’ve called us – which is disgraceful. Starmer’s doing the Tories’ job by getting rid of socialists. So, we say we need to get rid of him… We’ve got a rule change to push at this year’s conference… so we can remove Starmer with a vote of no confidence… We need to fight this all the way. So, we hope the Socialist Campaign Group of MPs and the unions will take up this fight as well. Because really, this is just the thin end of the wedge. First it’s us, the Marxists, then it will be Momentum and JVL.

Socialist Appeal told The Canary that the rule change would allow members to vote out the leader. It has been submitted to conference by “several” Constituency Labour Parties (CLPS). So, we’ll wait and see how that pans out.

There was a small group of anti-Jeremy Corbyn activists present. They accused him of being an antisemite: 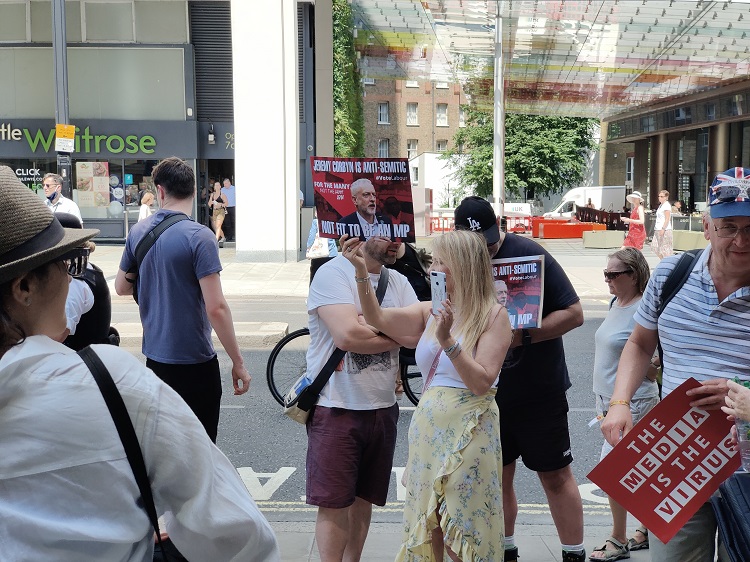 Anti-lockdown and coronavirus-denying activists also turned up. One of them was Corbyn’s brother Piers Corbyn: 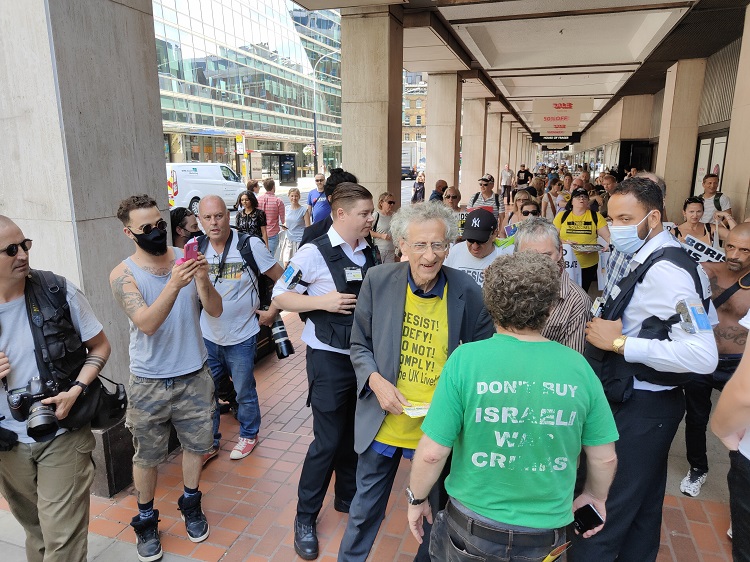 The majority of the Labour activists present weren’t happy with the arrival of these unwanted guests. There was also a small police presence, which seemed to be targeted at the coronavirus-deniers.

Unwanted guests aside, many people gave rousing speeches. Tina from Labour against the Witchhunt said that if the party didn’t expel members, then people must “try to stay” with it – “but if you stay you have to fight”:

Late into Tuesday afternoon, the news broke that Labour’s National Executive Committee (NEC) had voted to ban the groups. As PA reported, as many as 1,000 members could see their membership revoked as a result of the purge. The NEC agreed the move in a nine-hour meeting. It also discussed the full scale of the party’s dire financial state, with a voluntary redundancy process under way for staff. A Labour spokesperson told PA:

Labour is a broad, welcoming and democratic party and we are committed to ensuring it stays that way.

The NEC has decided that these organisations are not compatible with Labour’s rules or our aims and values.

Williamson gave his reaction to the news on RTUK:

At the demo, people were furious with what was happening to their party.

The end-game for socialism?

The bottom line here is that this looks like the end-game for any form of socialism in the Labour Party. This purge has been ongoing almost since Starmer took over. Now, by proscribing the only groups that were a vehicle for persecuted members, it’s almost game over. If the likes of Momentum think they’re safe, then they’d best watch their backs. Because it seems Starmer and the Labour machinery won’t stop until a full cleansing of the party has taken place – even if it means leaving a hollowed-out, financially annihilated husk in its place.

Featured image via The Canary and the Telegraph – YouTube