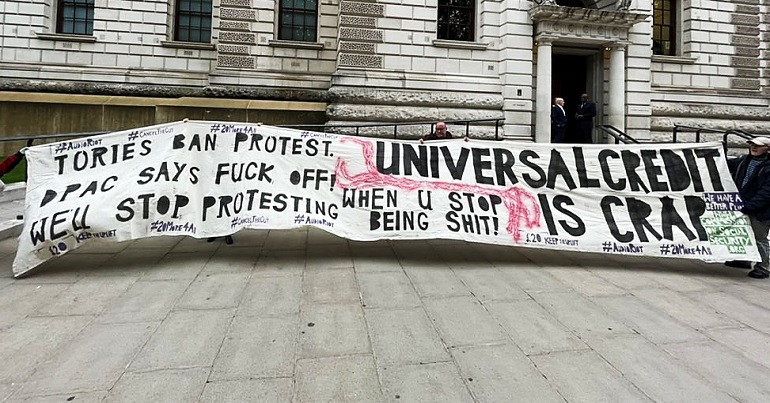 For the second time in a week, disabled people took to the streets over the Tories’ treatment of social security claimants. This time it was right outside Boris Johnson and Rishi Sunak’s front doors. The protest was partly about the Tories’ cut to Universal Credit – and DPAC’s actions also raise bigger points about the left as a whole.

As The Canary previously reported, grassroots activist group Disabled People Against Cuts (DPAC) has been holding a week of action. It’s over the Tories’ £20-a-week cut to Universal Credit. DPAC was also protesting over the Tories’ failure to increase legacy benefits during the coronavirus (Covid-19) pandemic and the Department for Work and Pensions’ (DWP) treatment of social security claimants.

On Tuesday 28 September, DPAC held an “audio riot”. It was outside Kings Cross station where protesters brought traffic to a standstill: 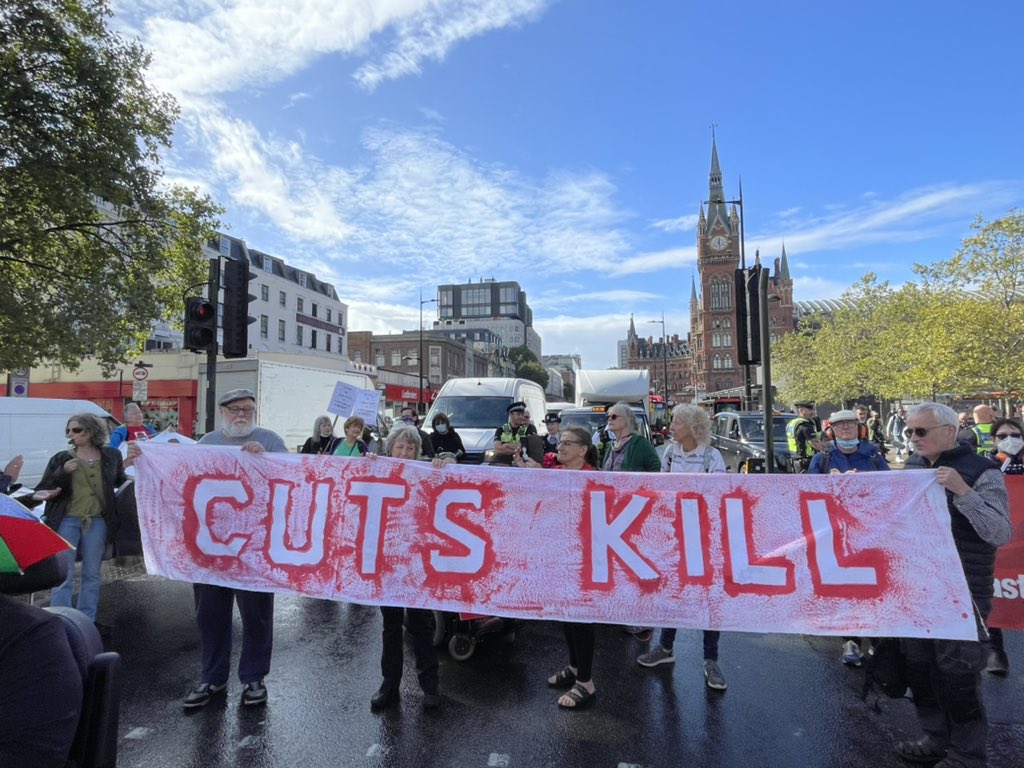 The protest aimed to make the public aware of the impact of Tory social security policies on disabled people. It also showed the broader impact of the Tories’ £20 Universal Credit cut and their failure to support legacy benefit claimants. This includes people on Employment and Support Allowance (ESA).

The £20 uplift cut to Universal Credit will a have devastating impact. With winter coming, mothers won’t be able to afford warm winter clothing and coats for their children, evictions will rise – as will poverty hunger and destitution. It’s the biggest cut to social security since WWII. It’s a travesty.

But it needs to be also stressed that the Tories completely overlooked and ignored legacy benefit claimants during the pandemic. Many of these 2.2 million claimants are disabled people. Some were also shielding. Living costs rose and disabled people couldn’t afford the most basic standard of living. When you ask disabled people what £20 uplift would mean to them, you hear the same response: everything; life-changing; affording fresh fruit; buying the extra items you need.

Protest at the heart of government

First, the group held a protest at the Treasury. It included artwork:

#AudioRiot We are outside the Treasury in London #CancelTheCut #20More4All WE WILL NOT BE SILENCED 👇👇👇👇 next stop Downing Street rt pic.twitter.com/aph0rbulSC

Other campaign groups were there supporting DPAC too. These included branches of Unite Community and also People Before Profit.

Next, DPAC moved on to Downing Street. It had banners and signs. These showed what the party has done to social security and its claimants over the past decade: 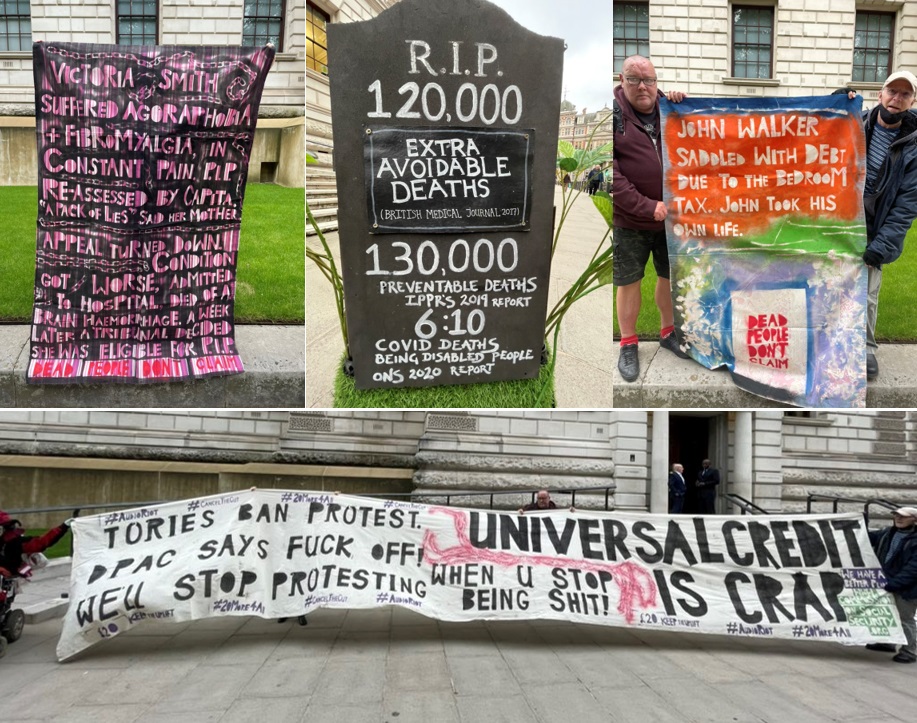 The group blocked the road outside Number 10:

The disgraced Met police were at DPAC’s demo:

The demo passed mostly without incident, but police did try and stop DPAC members on several occasions. For example, one officer tried to move them off the road: 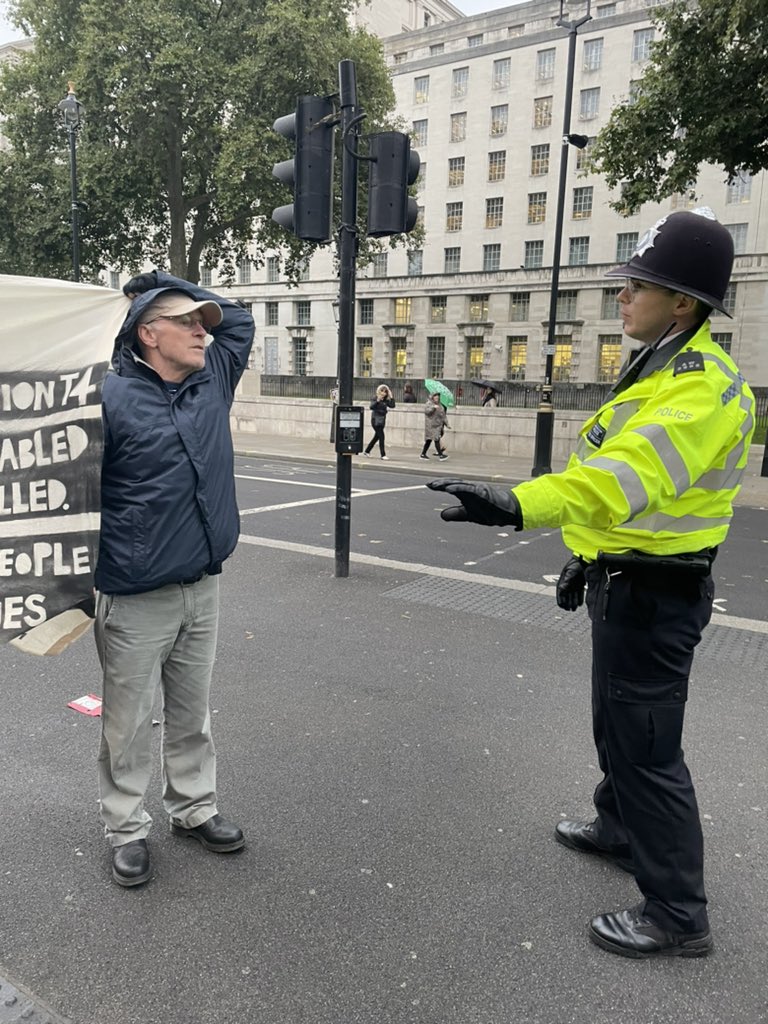 Another tried to stop DPAC speaking. They also tried to quote rules which aren’t even law yet. Peters told The Canary:

Some Met police officers started quoting the anti-protest laws which are part of the new police and crime bill at us: no megaphones to make a nuisance or make a noise. One of them tried to take the microphone from me. I hung onto it and shouted out we will not be silenced. Officers then reminded their colleague that the anti-protest bill was going through parliament and is not law yet.

The police and crime bill won’t stop DPAC or anyone else protesting to defend our rights. It will only make us more determined to speak out.

Overall, the protest was peaceful and the police generally kept their distance.

The continuing need for protest

Throughout the week, DPAC has shown a few things. Firstly, and as Peters summed up:

DPAC’s actions this past week show why it’s important to campaign. We must get the horrendous truth out to the wider public. It must know how devastating the removal of the £20-a-week uplift to Universal Credit will be.

Our two street actions along with online activity have been for everyone to collectively raise their voices and join in campaigning. It’s important we join together; build a people’s grass roots movement and fight back. What we’ve seen on the streets and the feedback we’ve got is that everyone is in agreement: the cut to Universal Credit is wrong and must be stopped.

This approach of both on- and offline protest is crucial – as is trying to raise public awareness of issues. But Peters had another point to make.

How long must this continue?

On 3rd October 2010 [DPAC] marched in the rain at the Tory party conference in Birmingham. 11 years on… disabled people are [still] marching in the rain. Fighting for justice

However, despite countless protests, UN accusations of abuses of disabled people’s human rights, and around 35,000 deaths on the DWP’s watch, the Tories’ toxic attitude to social security hasn’t changed. It’s the same for housing. The same for refugees. And the same for the NHS – and so on. So, does DPAC, and the left more broadly, need a new approach?

Ken Loach: the time is now

As filmmaker Ken Loach told The Canary in a recent interview, in campaign groups like DPAC:

there’s a great wealth of anger at what is happening, of knowledge of what is happening, of understanding how we have to fight back. And it was united when Jeremy [Corbyn] was leading the Labour Party. The key question now, to me, is how we keep that movement coherent, both inside the party and outside. And I think that is not a political party to get seats, electoral seats, that’s not an electoral process, because that’s been tried and it will tend to fail. But keeping that movement coherent, and united, and identifiable. And to do that, it has to be led by recognisable people that the others will trust and recognise.

Loach couldn’t answer what that movement would look like. DPAC’s protest showed a promising flicker of this, with other groups supporting it. But Loach warned that if the left doesn’t unite quickly, then the energy Corbyn harnessed:

will evaporate, and the left will be back to sectarianism, to demonstrating and campaigning, and knocking on the door from the outside.

The left broadly needs to start looking at these issues. As Peters summed up:

Tory government be warned: while we have no justice, you will have no peace. And we will be on the streets. There’s growing anger and hope we can turn that anger into positive action to effect change.

Change across society is needed – and has been for a long time. Protests like DPAC’s are a crucial part of this. But the left also needs to look at just how we can remain united and map a path for the future. Because so far, it has failed to defeat the Tories. And as things stand, change is still a long way off.