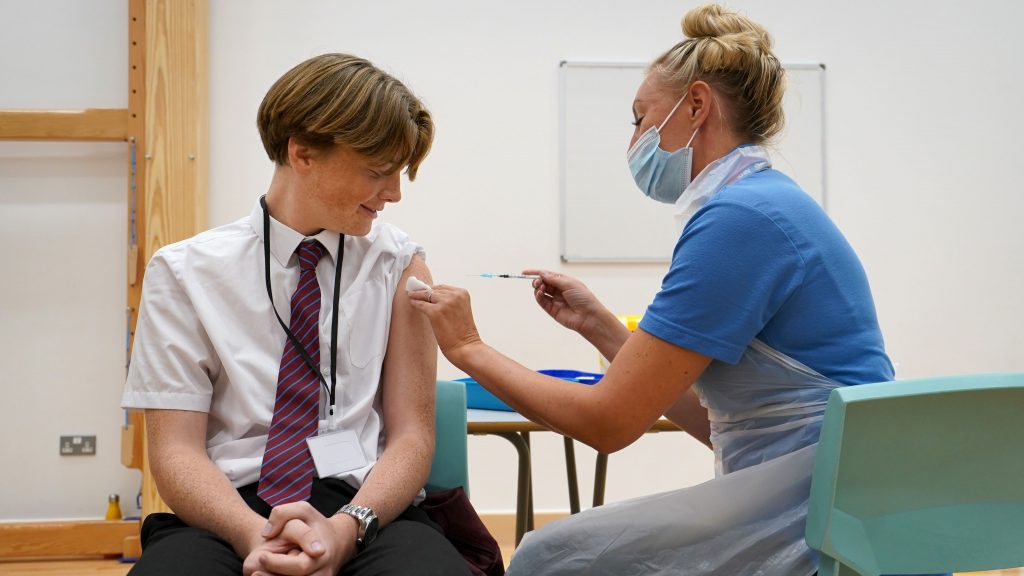 One in 20 young people at secondary school in England are estimated to have had coronavirus (Covid-19) last week. Coronavirus infection levels remain high in all parts of the UK, new figures show.

The number of people testing positive for the virus is estimated to have increased in England and Wales. Although it has fallen slightly in Scotland and Northern Ireland.

Around one in 85 people in private households in England are likely to have had coronavirus in the week to 25 September. That’s up from one in 90 in the previous week, according to the Office for National Statistics (ONS).

One in 85 is the equivalent of about 658,800 people. At the peak of the second wave in early January, around one in 50 people in England were estimated to have coronavirus.

Some 4.6% of children in England in school years 7 to 11 – around one in 20 – are likely to have had coronavirus last week. That’s the highest positivity rate for any age group.

The rate of children testing positive is estimated to have increased among those aged from two to school year 11. And there were also early signs of a possible increase for those aged 70 and over, the ONS said.

Meanwhile the percentage testing positive decreased for those from school year 12 to age 24. And it levelled off for people aged 35 to 69, while the trend was uncertain for those aged 25 to 34.

All children aged 12 and over in the UK are now able to have a first dose of coronavirus vaccine. This means those in school years 8 to 11 in England, as well as some in year 7, can get the jab.

The ONS estimates are based on a regular sample of nose and throat swabs taken in the community. Moreover, they don’t include people in care homes, hospitals or other institutional settings.

In Wales, around one in 55 people are estimated to have had coronavirus in the week to 25 September. That’s up from one in 60 the previous week and the highest level since the week to 23 December 2020.

For Scotland, the ONS estimates around one in 55 people had coronavirus in the week to 25 September. Although this was down from one in 45 the previous week. And one in 45 was the highest level since estimates began for Scotland in October 2020.

Among the regions of England, the percentage of people testing positive for coronavirus is estimated to have increased in the East Midlands, north-west England, south-west England and Yorkshire and the Humber.

It has fallen in London and north-east England, while the trend for all other regions is uncertain.

London had the lowest estimate at around one in 130.

In Yorkshire and the Humber, around one in 55 people were likely to test positive for coronavirus in the week to 25 September. That’s the highest proportion of people of any region to test positive in that week.

Meanwhile schools and workplaces remain open throughout the UK. And schools are no longer required by the government to adhere to any safety measures to prevent the spread of coronavirus.