The National Institute for Health and Care Excellence (NICE) is facing a legal challenge. It’s over the body’s delay in publishing new treatment guidelines for a chronic and debilitating disease. But as the backstory to this potential court case shows, the chronically ill people at the centre of this scandal have already suffered enough at the hands of the medical and political establishment.

NICE: in the dock?

NICE is facing possible court action. It’s over treatment guidelines for myalgic encephalomyelitis (ME). The neuro-immune disease is sometimes called chronic fatigue syndrome (CFS). NICE was supposed to publish the update in August but cancelled the release at the last minute. NICE will be holding discussions with stakeholders and others involved in the guidelines in a few weeks. In the meantime, someone has launched a legal bid.

Lawyer Peter Todd is representing a client over this. He tweeted that:

The letter before claims seeks agreement by NICE to revert to follow its procedures as set out in its manual no later than noon on Wednesday 6th October 2021, in default of which we intend to issue proceedings asking the High Court to intervene.

Any roundtable must be held after publication of the guidelines

What is a judicial review?

The Courts and Tribunals Judiciary website says a judicial review is:

a type of court proceeding in which a judge reviews the lawfulness of a decision or action made by a public body.

In other words, judicial reviews are a challenge to the way in which a decision has been made, rather than the rights and wrongs of the conclusion reached.

It is not really concerned with the conclusions of that process and whether those were ‘right’, as long as the right procedures have been followed. The court will not substitute what it thinks is the ‘correct’ decision.

This may mean that the public body will be able to make the same decision again, so long as it does so in a lawful way.

It should be noted that as The Canary previously reported, in the High Court some cases are being delayed due to a shortage of judges. So, how long this process will take is unclear. Also, if NICE does not adhere to the 6 October deadline, there is still no guarantee that a judge will grant a judicial review, anyway.

But why is NICE facing this potential legal challenge in the first place?

A catalogue of disasters

As The Canary has been reporting, NICE’s delay has sparked anger among the chronic illness community. Its update of ME treatment guidelines has proven controversial. This is because its previous guidelines recommended two treatments based on flawed research. These were graded exercise therapy (GET) and cognitive behavioural therapy (CBT). You can read The Canary‘s full analysis of the NICE guideline update here.

In November 2020, NICE published the draft of its new guidance. It had removed GET and downgraded CBT from a treatment to a supportive therapy to help patients deal with living with a chronic illness and its symptoms. On 18 August, it was due to publish the final version that medical professionals would have to adhere to. But media reports said that some professional medical bodies like the Royal College of Physicians had refused to endorse NICE’s new guidance. NICE itself said that its final guidelines were not “supported by all”. So it pulled the plug on publishing them.

NICE later announced it would hold a roundtable meeting with stakeholders in September. This was to discuss how best to move forward. It’s since pushed this back until 18 October. On social media, there have been reports of who will be attending the event. Some people have alleged that certain reported members of the roundtable event, including its chair, have conflicts of interest over the PACE trail, GET, and CBT; that is, they’re proponents or supporters of them. So far, NICE has not confirmed who will be at the meeting.

After NICE announced the delay, a barrister leaked NICE’s finalised guidelines. You can read The Canary‘s full analysis here. In short, NICE’s delay in publication was seemingly due to pressure from people with contentious vested interests – ones which are at odds with the professional opinions of many others. And now, with the full guidelines in the public domain, it’s clear why those with certain agendas lobbied NICE to get the guidelines stopped. And this continuation of what many consider to be abuse of people living with ME has caused widespread distress in the community.

These guidelines have been riddled with controversy for chronic illness communities. People living with ME have long campaigned against the distress and abuse they suffer from ME treatment options which were based on discredited research. The leak of these guidelines brings forward a whole host of issues:

NICE’s own credibility hangs in the balance. But now the potential judicial review could once again change things.

What could the legal challenge hold?

At this stage, it seems Todd’s client is launching a judicial review on the basis NICE has not followed its own procedures. Many medical professionals have commented on NICE’s unprecedented actions. Professor Ron Davis, an expert in ME, wrote that:

NICE has completed their objective scientific review. It is a travesty that NICE is being influenced by people with vested interest in maintaining their beliefs in treatments that have long been shown to lack evidence supporting them and have been shown to be harmful to patients. If NICE does not stick to their mission of unbiased evidence based guidelines, then it will lose its credibility.

In other words, NICE appeared to follow its own protocols on the drawing up of guidelines. The review was complete and ready to be published. Then, due to external influences, NICE changed its mind. Research charity Invest in ME noted that this happened before – but in a different scenario:

So great was the opposition to the 2007 NICE guidelines that NICE were taken to a judicial review – by patients – a case that was only lost due to machinations behind the scenes by NICE and its legal team. Yet despite the patient objections NICE decided to publish anyway. Therefore, a precedent was set to continue to publish despite one party disagreeing.

The point being that the basis for the judicial review may be that NICE has not followed its own precedent around creating guidelines and then publishing them.

NICE says nothing. A person with ME says…

The Canary asked NICE for comment. But it had not responded at the time of publication.

Meanwhile Sally Callow, who lives with ME and founded the social enterprise ME Foggy Dog, told The Canary:

The ME/CFS patient community has experienced neglect and abuse from medical professionals and organisations for many decades. In recent years, the abuse our community has faced on a daily basis has been, and still is, relentless. The NICE ME/CFS guidelines delay was the last straw for many, myself included. To read that a solicitor has started possible legal proceedings is like the sun rising over the horizon. This gives us hope that change may be coming, the tide may finally be turning.

Why our community needs legal representation to make a medical body abide by their own protocols is beyond comprehension. The updated guidelines are needed immediately; today, in CFS clinics around the UK, patients are being told to participate in GET and CBT. This is despite NICE advising against this in their November draft after reviewing the scientific evidence. This political posturing is entirely down to the proponents of GET and CBT, and nothing will change until NICE update their guidelines.

While the legal wrangling begins and NICE continues to stall, in the real world people are at risk of harm.

On 1 October, The Canary was passed a leaflet from someone living with ME. It showed that a clinic was still offering GET as a treatment. Worse still, the clinic told the person that “CFS” (ME) was a “mental health condition”: 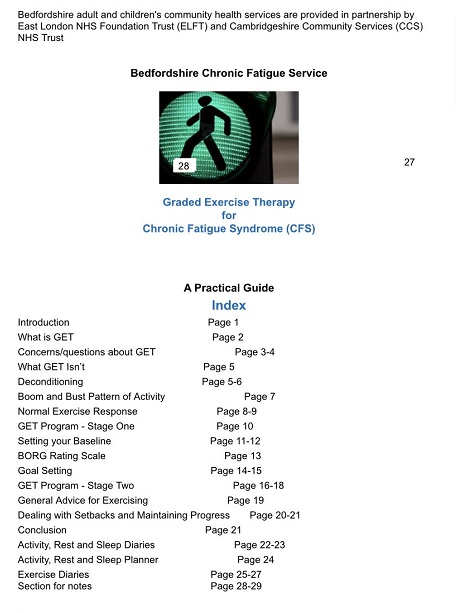 Wondering as a lawyer: if NICE now knows for certain, based on its “rigorous methodology”, that #MECFS sufferers are being harmed by GET – how could they be able to argue in the future that they did not knowingly contribute to the continuation of this harm beyond [18 August]?

So now people living with ME, their families, and advocates must wait. Given that the scandal surrounding this disease has been decades in the making, a few weeks may not seem a lot to some people. But for the community subjected to stigma, disbelief, and dismissal by medical establishment, even a matter of weeks is far too long. It’s effectively the continuation of years of abuse.

NICE must now do the right thing. It must publish the guidelines in full, immediately. Then, it must work to rebuild its reputation. And moreover, it needs to listen to the very legitimate concerns that people in the ME community have, not only about its conduct but about the guidelines overall. Nothing less will suffice.