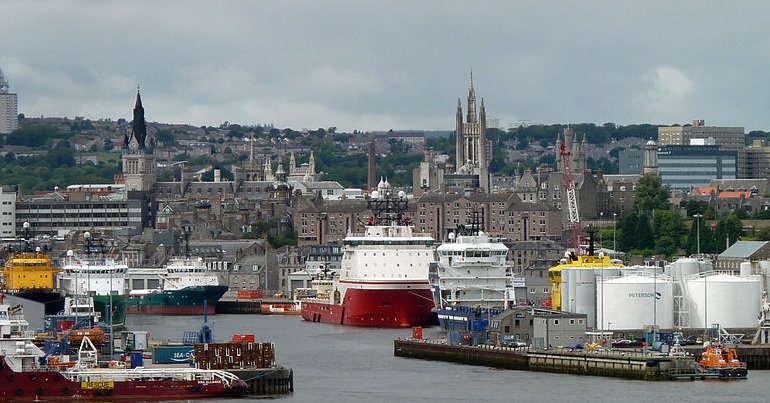 Students in Scotland just scored a major victory against the fossil fuel industry in its European heartland. Following eight years of campaigning, they have succeeded in securing a commitment from the University of Aberdeen to divest fully from dirty and destructive energy.

The Scottish city has been the effective capital of the fossil fuel industry in Europe since the 1970s. The university also has links to the trade. That makes the pro-divest vote a significant blow to the sector.

The timely vote also demonstrates the direction policymakers need to take at the upcoming COP26 climate conference in Glasgow. Namely, they need to make decisions that firmly and quickly bring the fossil fuel era to an end.

considered full divestment from fossil fuels but have decided to use the unique position and influence of the University to engage with the sector and encourage the transition to the low carbon economy.

Climate justice campaign manager for the network Laura Clayson spoke to The Canary. She said that the UK student divestment movement acts in solidarity with “people hit first and worst by the impacts of climate change and fossil fuel extraction”, such as indigenous peoples and communities in the global South.

As the university’s student-run newspaper the Gaudie reported, Fossil Free Aberdeen’s campaigning efforts yielded progress in March. That month, the Senior Management Team at the university confirmed it would be presenting the case for divestment to the University Court.

The Court is akin to a council that manages the university’s resources. It has a number of independent members, alongside staff, trade union and student representatives, and others. Some of the Court’s members have backgrounds in the oil and gas industry. The university also offers scholarships sponsored by industry giants.

Nonetheless, on 29 September the Court voted to exclude fossil fuels from its £52.7m investment portfolio by 2025. Fossil Free Aberdeen’s Alisa Koester, who is president of Aberdeen University Students’ Association, described the vote as “a massive win for environmentalism, students and our planet”. Clayson also argued that the move:

indicates that severing investment links with fossil fuel companies within our educational institutions is now a mainstream ask and majority position, even within universities that have long-standing relationships with the industry.

SNP Common Weal organiser and daughter of a Scottish oil worker Kairin van Sweeden, meanwhile, commented that the decision “acknowledges that the oil and gas industry has no long term future”.

In a statement, the university’s senior vice-principle Karl Leydecker said:

We have worked alongside the student community in the development of this [divestment] policy, which makes clear our intention to work with the energy sector as part of a just transition to a greener, more sustainable future.

Leydecker asserted that the institution continues “to value our industrial partnerships”. And he indicated that it “will continue to invest in energy companies that are leading the process of energy transition”.

A conciliatory sentiment was apparent in the senior vice-principal’s comments towards the energy sector overall. Despite this, Clayson said the divestment decision puts the university in a stronger position to “play a crucial role in facilitating a Just Transition for the local area” away from dependence on the business of dirty energy. She explained that this entails the university helping to ensure that “there are opportunities for local workers in sectors which are currently reliant on fossil fuels”.

According to the latest workforce report from trade body Oil and Gas UK (OGUK), the industry is connected to a total of 0.6% UK jobs, or just under 200,000 employments. That includes direct employment, jobs in companies in the entire supply chain for the industry, and employment in industries that benefit from oil and gas income expenditure. In short, not all of the employments OGUK links to the industry in its statistics are wholly reliant on it.

The timing of the pro-divestment vote is significant, coming as it does within weeks of COP26. Clayson highlighted to The Canary that “Indigenous and frontline communities [are] demanding climate justice is centred in the talks”. This means that the policymakers who gather in Glasgow for the conference should address the historic, current, and future injustices and inequalities at the human heart of the climate crisis. It also means that leaders should make decisions that benefit those bearing the brunt of the crisis, and the global majority, not those who have knowingly brought the crisis to bear in pursuit of profit.

Closing down the fossil fuel era as swiftly as possible is key to achieving justice. But countries like the UK are falling miserably short of making that happen. Indeed, the UK has plans to expand fossil fuel extraction, including in the North Sea, Yorkshire, and Surrey.

This is beyond irresponsible and unjust. COP26 offers its host – the UK – an opportunity to change tack and instead follow the admirable example set by the students of Aberdeen.