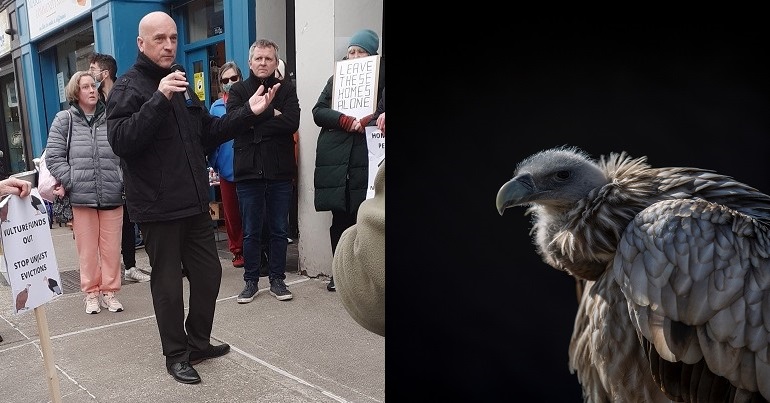 “Homes for people – Not for profit” and “Vulture funds – Out now” came the chants at the street protest organised by Irish MP Richard Boyd Barrett . Barrett is from socialist party People Before Profit. He organised the protest in support of the people of St Helen’s Court in Dún Laoghaire, in the south of Dublin. Since 2016, vulture capitalists have been trying to evict this community from their homes. Some people have lived here since 2009.

The Canary went to the protest on Saturday 29 January and spoke to the tenants. They face a serious threat of eviction and possible homelessness. According to campaigners:

That’s because their vulture capitalist landlord is taking this community to court on 4 February to force them out of their homes.

What is a vulture capitalist?

Vulture capitalists “swoop in” and buy failing companies at a fraction of their previous value. Then they do whatever is necessary to sell that company on for a profit. They may also decide to hold onto the company while making job cuts or selling off company assets.

Given that vulture capitalists can, according to author and professor David Whyte, thrive at the expense of others, a more appropriate term might be ‘parasites’.

The vulture fund has no reason for evicting them other than greed to increase the value of the property.

Moreover, in the midst of a housing crisis in Ireland where homelessness increased in 2021:

There are now about 15 perfectly good apartments sitting empty in the complex [St Helen’s Court] for up to two years, which could be used to house people.

Due to this housing crisis, even if the people facing eviction from St Helen’s wanted to leave the community they’ve been living in for over a decade, many of them couldn’t:

The tenants have made every effort to get alternative accommodation but with sky-high rents in the area and the years-long social housing lists, they have nowhere to go.

The current owner of this property is Mill Street Projects Limited with an address in County Donegal. Its director is Paul Gavin Martin. One of the shareholders in this company is another company called Victoria Property Holdings Limited. This shareholder has an address just 4 and a half miles away in County Derry, which is across the border in the north of Ireland.

Paul Gavin Martin is also a company officer of Victoria Property Holdings. And the other directors of the company (Michael Gerrard Martin and Gary Michael Martin) own substantial property portfolios.

What do they want with this property?

According to Barrett, the owner of this property is inspired purely by profit motives. He told The Canary that a representative of the vulture fund said at a property dispute hearing:

it’s not pleasant… it’s ugly, but we have to maximise the value of our client’s investment

He added that if this company manages to evict the tenants, it can then “drive up the value of the property and the rents that they can charge”. So Barrett wants the government to take over this site using a compulsory purchase order. Moreover, he wants the government to prevent the evictions and house people who “desperately need housing” in the vacant properties in St Helen’s.

Tenants Radoslaw Czuchaj, Sean Mitchell and Tony Geraghty spoke to The Canary. They said an eviction on 4 February would mean “we may only have two weeks” to find alternative accommodation. And that would be incredibly difficult for these men. They say they can’t afford a new place because “prices are crazy”.

Czuchaj has been living in this property since 2009 and Geraghty has been there for over ten years. Geraghty says he’s 65, suffers from ill health, is in receipt of jobseeker’s allowance (welfare payment in Ireland), and can’t find work. He says it’s “desperately scary,” because he doesn’t have the funds to find a new place. All three men say they’ve contacted the company but there’s been no response. “They’ve never responded back to us,” says Czuchaj. Mitchell added that the vulture fund company didn’t negotiate with them at any stage and just wanted the keys back. But he said:

Not confined to Ireland

Of course, the problem of vulture capitalism isn’t confined to Ireland. Their “predatory investment practices” have targeted several countries in financial difficulty. And before coronavirus (Covid-19) had spread across the globe, they’d amassed trillions of dollars in a “war chest” waiting for their next opportunity to exploit.

Companies such as Blackstone bought up homes in the US as families couldn’t afford to pay their mortgages. Additionally, austerity policies by right-wing European governments meant cities like Madrid sold off their social housing for next to nothing to these giants. And in the midst of the pandemic, companies such as Axa and QuadReal Property spent more than £1bn buying “more than 2,500 homes in the UK alone”.

But there could be a way to tackle their exploitative behaviour. According to one collaborative report, “New York State law has played a key role in enabling the vulture fund playbook”. The vulture funds in turn have used this law to exploit countries in financial difficulty. And so, according to this report:

New York is uniquely positioned to step in and pass laws that would disrupt the vulture fund playbook and stop them from profiteering at the expense of countries in financial trouble.

A long way off? Maybe yes. But maybe not, if people stand in solidarity and put pressure where it matters.

The Canary contacted the property owners, the Department of Housing, Local Government and Heritage, and Dún Laoghaire Rathdown County Council, but none of them responded by the time of publication.

There is a fight back

Even if the objective of a vulture capitalist is to exploit misery for profit, the owners of these companies are people with names. They aren’t machines or even a faceless organisation, as we now know in Dún Laoghaire. This means they’re susceptible to pressure which can be brought to bear if people contact them and their elected representatives. When contacting them, people can express how angry they feel about companies profiting from the misery of others and about these companies potentially forcing homelessness. Maybe then a change in the law could happen.

Barrett says the Irish government is failing to act on this, which means these vulture funds continue “to make profits from treating people in this way”. But the campaign to save this community is strong, and fightback is underway. Following on from Saturday’s successful protest, campaigners are meeting outside the Bridewell Court in Dublin city centre at 1:45pm on Friday 4 February. They’re meeting to show their solidarity and are asking others to join them. Maybe then we can save this community in Dún Laoghaire, as well as several others, from this needless eviction and greed.