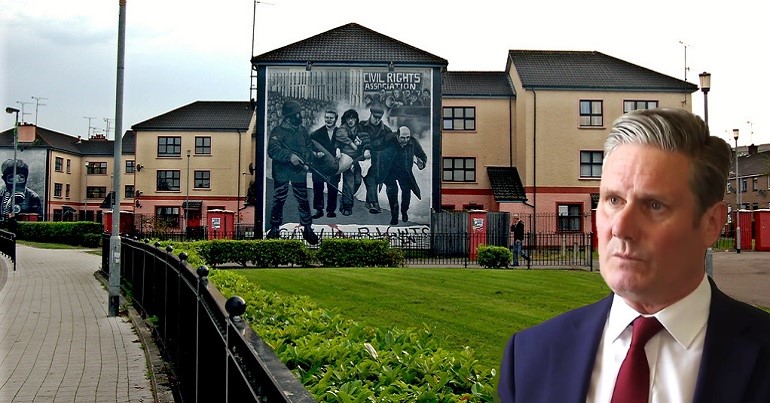 It’s been 50 years since British troops murdered 14 unarmed civilians in the north of Ireland. Some former Labour leaders have properly acknowledged the massacre. But Keir Starmer managed to whitewash the British state’s responsibility for it. And his position sums up that of the establishment towards Bloody Sunday 1972 and Ireland more broadly.

British forces committed the Bloody Sunday massacre on 30 January 1972. It was when British paratroopers entered the Bogside in Derry and shot and ultimately killed 13 civil rights protesters. One victim died four months later. British paratroopers injured another 14 people. The massacre, in some respects, is fairly clear cut: British soldiers killed 14 unarmed civilians. But justice for the victims and their families has never happened. You can read more on Bloody Sunday here.

In 2010, the Saville inquiry into Bloody Sunday cleared the 14 dead of any wrongdoing. Since then, the UK government and judicial system has not given the victims and their families justice. As The Canary previously reported, in 2019 the British state said that just one of the 17 surviving soldiers who committed the killings would face prosecution. Soldier F was allegedly responsible for the murders of William McKinney and James Wray.

In July 2021, however, the north of Ireland’s Public Prosecution Service dropped the case. The brother of McKinney, who was killed by British troops, can appeal the ruling. Those in the army who gave the orders to the paratroopers, and their colleagues in the UK government who oversaw the operation, have still not faced any form of inquiry or prosecution.

The British government: the “catalyst in the war in Ireland”

In the days leading up to 30 January 2022, people were paying tribute to the victims. People took part in a remembrance walk on the day. They then gathered at the Bloody Sunday Monument in Rossville Street, where the annual memorial service and wreath-laying ceremony took place.

The British government intend to announce an end to all legacy investigations. They intend to announce it because they’re scared. Scared that their soldiers, spooks and civil servants will be exposed, and that their role as a combatant and catalyst in the war in Ireland will be highlighted around the world. They are trying to deny us justice because they are scared to face justice.

But we want to send a very clear warning to the British government. If they pursue their proposals, the Bloody Sunday families will be ready to meet them head on.

As The Canary‘s Peadar O’Cearnaigh tweeted, much of the commentary and coverage failed to mention who killed the 14:

Countless commemorations on #BloodySunday50 on mainstream media say 14 people 'were shot' & several others 'were wounded'. By who? We'll never know I guess…an unsolved mystery… #derry pic.twitter.com/YT724Wxa2I

One of those people absolving the British soldiers and the state of any responsibility was Starmer.

He tweeted his tribute for the victims. And it failed to mention anyone as a perpetrator:

50 years ago, the horror of Bloody Sunday unfolded in Derry.

The victims left behind families and a community that grieved their loss and struggled for decades to have the truth told about what happened.

I send them my deepest respects on this poignant and significant day.

So, as Young Labour rightly summed up:

It didn’t “unfold.” It was state-sanctioned massacre. You also sacked a Labour MP from the front bench for voting against the SpyCops Bill – which would prevent the prosecution of UK troops for war crimes.

it’s an outrage that nobody has been prosecuted for the deaths of 14 innocent civilian protesters. And it’s a double outrage that the British government is now planning legislation to make it even harder for such an effort to succeed.

"But people need more than apologies.. It's an outrage that nobody has been prosecuted for the deaths of 14 innocent civilian protestors.."@jeremycorbyn speaking at the 50th anniversary memorial of Bloody Sunday, at Derry Guildhall. pic.twitter.com/lhUOwN7nHr

But Corbyn’s view is in isolation. The British establishment and state’s attitude to Irish people has been vile throughout history. As The Canary‘s Peadar O’Cearnaigh previously wrote:

A recorded telephone conversation between two British army officers on Bloody Sunday, where they make light of the numbers killed, gives an insight into their thinking.

The Black and Tans were the paratroopers’ predecessor. They were responsible for part of the previous Bloody Sunday in Dublin in 1920. That day they murdered 13 Irish civilians watching a football match. After the Irish rebels defeated them, some of the Black and Tans served in the British Palestine Gendarmerie.

And as The Canary also reported, the attitude by the British establishment towards Irish suffering during the famine in the 1840s has changed little.

So, why would former director of public prosecutions and knight of the realm Starmer behave any differently?

an act of undisciplined slaughter perpetrated by blood-crazed Paras. This assumption though is wrong and to a large extent lets the British establishment off the hook. By assuming that soldiers “ran amok” it puts the blame on individual soldiers who pulled triggers and killed people. Bloody Sunday was a planned, calculated response to a demand for civil rights, designed to terrify organised protestors away from protesting. It fits easily into the catalogue of British involvement in Ireland as a quite logical and even natural event.

Starmer is the British establishment. Therefore, his attitude to the victims and their families is also “quite logical” – even if it utterly betrays them in the process. Meanwhile, these families are still fighting for justice after half a century. Sadly, given the British state’s history, it seems that fight will continue for many years to come.