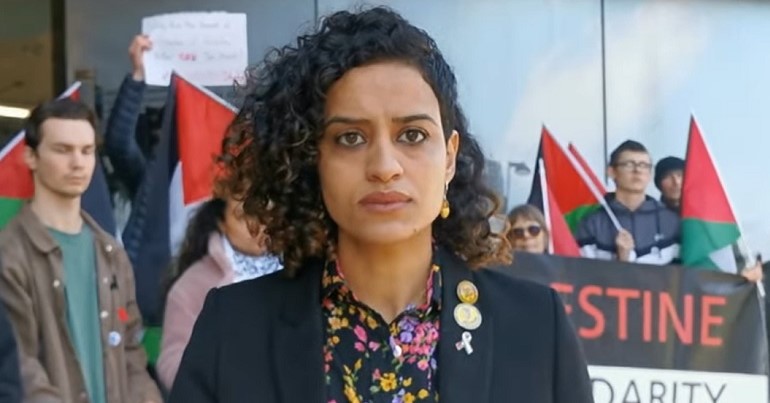 Palestinian academic Shahd Abusalama, a PhD student and associate lecturer at Sheffield Hallam University (SHU), was suspended from her role following accusations of antisemitism. However, Abusalama completely rejects these accusations and says they’re “malicious and motivated in bad faith”.

On 27 January, Abusalama said she’d been reinstated to her teaching – although she still hadn’t seen the allegations against her. She said:

I am accused of antisemitism. Because I dare to speak up against power, and I dare to demand freedom, justice, and equality for my people

She added that SHU announced an investigation without her knowledge. Moreover, she told The Canary she’s completely in the dark about the content and timeframe of this investigation.

So even if her reinstatement is welcome news, it’s certainly not the last we’ll hear of this. Because Abusalama demands people take action against censorship of Palestinian voices and against the university’s handling of this matter.

Abusalama told The Canary she first became aware just before the 2021 Christmas break that something like this might happen. She said someone at the Jewish News contacted her for a statement claiming SHU was about to investigate her tweets for antisemitic content. The outlet published an article on it on 24 December 2021.

Then Abusalama said that in January:

I was going to meet my students for a second time on Friday for my scheduled seminars… I received this sudden email from my university saying that I cannot resume teaching and that I’m under investigation following a complaint. Everything was vague. Nothing was mentioned of the nature of the complaint or why I was suspended. They also notified me that they would tell the students that my classes were cancelled until further notice.

Her suspension was compared to that of University of Bristol professor David Miller who was fired from his position in 2021. The case against him was also based on allegations of antisemitism in response to his academic work linking Zionism to Islamophobia. Miller said he was speaking out against anti-Muslim racism in the UK. While Miller was cleared of “anti-Jewish bigotry”, the university didn’t reinstate him.

Abusalama now wants people to write to the university to demand it drops its investigation. She also wants it to issue a public apology and ensure Palestinian justice activists are not subject to “malicious censorship” again:

I am reinstated, which shows how powerful our voices are when they are joined together. Yet, it's not over.

We need to continue to stand #InSupportOfShahd. Here's how 👇 #Thread

She additionally wants the university to drop its adoption of the IHRA definition of antisemitism. Because while this definition does apply to antisemitism and other forms of racism, it also conflates antisemitism with criticism of Israel.

Her suspension comes at a time when Israel continues to expel Palestinians from the Sheikh Jarrah neighbourhood in East Jerusalem. This is a move which a spokesperson for the UN high commissioner for Human Rights had previously said was “prohibited under international humanitarian law and may amount to a war crime”. It also comes at a time when Palestinians hold “Global Days of Action for Palestine”. On these days of action, Palestinians intensified:

protests against Israel’s dramatic escalation of violence and ethnic cleansing across Historic Palestine.

Abusalama spoke to The Canary at a protest in Sheffield in May 2021. She called on the world to act as Israel besieged Gaza. Israel bombed Gaza from land, sea, and air and killed over 130 Palestinians on that occasion, the majority of whom were civilians. She told The Canary:

Reporting from the ground what is happening, the repression of Israeli military and settler extremist groups is beyond description, and no one is safe in their homes. It is indiscriminate repression. …

The inherent recent racist character of the supremacist ideology of Zionism, that that is basically dictating the policies and practices of dehumanisation against the Palestinians.

We are counting one massacre after the other, one victim after the other. And it’s just non stop. And we don’t want more condemnation or declarations. We don’t want to hear calls for de-escalation. We want Israel to be held accountable. And it’s long overdue, that justice is served for the Palestinians. It is long overdue that Palestinian refugees like me, return to their home. It’s wrong; it’s morally disturbing that Jews anywhere in the world, in the US, can go and claim a right to return to Palestine when I, the indigenous people of Palestine, cannot return.

They allegedly targeted her

Abusalama believes Jewish News, which she described as “Zionist press”, protested her appointment as associate lecturer at the university and could have targeted her. She also said:

that people who lead the campaign against antisemitism are also people who are chairs of the Jewish National Fund, who has been leading Zionist settler colonial expansion on our lands since early 20th century. And until now, they are contributing to the dispossession of the Palestinians in Jerusalem, in Hebron, in Beita… everywhere

She believes her case is part of a coordinated attempt by Zionist organisations to take down pro-Palestinian academics. She provided examples of this to The Canary.

These include an allegation that a criminal attorney in Vienna accused her of writing an antisemitic article in Al Jazeera. This was an attempt to damage her reputation and position at the University.

Then in August 2019, David Collier published a report called The Labour Party, obsession and radicalisation. The report included a case study on Sheffield. In that report, he accused Abusalama of spreading “hard-core antisemitism”. She also claims the Jewish Chronicle smeared her because of her 2019 Boycott Eurovision Campaign. That was the year the competition took place in Israel.

engage with the Zionist press, confirming to them that they have adopted the political tool of the IHRA definition of antisemitism, while continuing to be dismissive of their own students’ education, my story and my life

The Canary contacted SHU for comment but received no response.

This is why, according to Abusalama, resistance against such attacks is crucial. There was an outpouring of support for Abusalama across social media and in public which she believes helped her in this struggle:

Palestinian academic at Sheffield Hallam University @ShahdAbusalama, who was suspended following a smear campaign by supporters of 'Israel', has been reinstated in her role, following protests over her suspension. (1/2)#InSupportOfShahd pic.twitter.com/n85Up00BGX

Abusalama said she’s very grateful for the support she has received so far. She says it’s “keeping me grounded and what is keeping me carrying on”. The “overwhelming” support has come from students, others at the university, her trade union, and people all over the world.

She also thanked “alternative press” for its support and for “shifting the narrative and [equalising] the gap in this power imbalance”. This latest alleged attempt by the Zionist lobby to silence criticism of Israel’s crimes is not going unanswered.