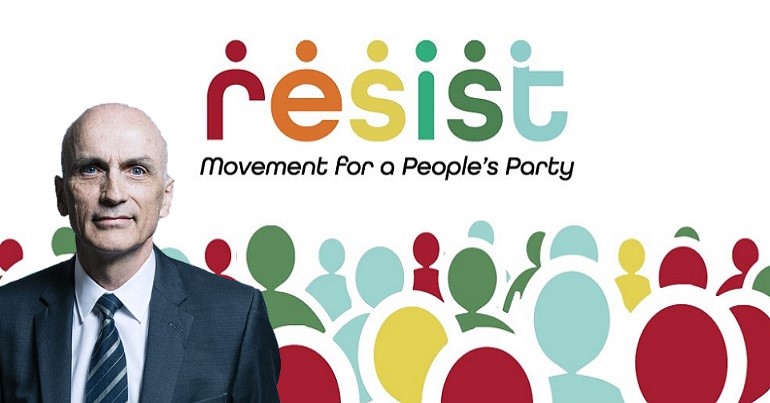 In Nottingham on 16 and 17 October, Resist held a festival to celebrate unity among the left. Former MP Chris Williamson formed Resist as:

a grassroots movement with nationwide support, which aims to empower communities and workers through democratic, practical and political means.

The festival brought together an impressive range of speakers to talk about their own story of resistance including activists and performers like Lowkey, Alexei Sayle, Jackie Walker, and Dr Bob Gill. Other speakers included historians and journalists such as Ilan Pappé, Abby Martin, and Max Blumenthal, professor Bill Mitchell, and many others.

Having been there and met some of the most amazing and hard-working people I’ve ever met, I’ve come away truly inspired. Namely I’m inspired to work harder to bring down a rotten establishment that seeks to serve the rich and takes great pleasure in exploiting, and leaving for dead, poor and working-class people. An establishment that serves neo-liberalism and attempts to keep us in our place through divide and conquer.

But the weekend of Resist did something else for me. It confirmed something that shouldn’t have needed confirmation: the Labour Party, as a party of working-class people, is dead. In fact, I don’t believe that kind of party ever existed. Now there’s a credible working-class movement emerging. One that could possibly affect the kind of change we need.

Yet last weekend also left me with a question: Could such a grassroots movement, inside the confines of parliament, make a real difference for working-class people? That’s something I can’t answer. Time will tell. But whatever the outcome, this fearless, relentless bunch I met in Nottingham are about to give it a right go. And this group will face down any scandalous lies told about them or witchhunts launched to discredit them. The establishment better watch out!

On the second day, a panel of speakers and festival delegates debated the topic: Should The Resist Movement Register To Become A Political Party?

Following a lively and, at times, contentious debate, the overall feeling was one of support. An indicative vote showed the vast majority of voting delegates support the move. Two weeks ago, this was also the general feeling of respondents to the same question on Resist’s social media page. Paid members of the movement will now vote on this in the coming week. This should give a definitive answer.

What exactly comes after that – we’ll have to wait and see. But what was clear to me was the vast majority of people I spoke to believe the Labour Party, as a representative of the working-class, is dead and well beyond saving. It’s for the bin. And while not everybody there supported the formation of a new political party, there was palpable anger with the ruling elite. It’s an anger that’s more than justified.

Among the delegates there was a very strong appetite for a fight back – a fight back against an anti-working class parliament, a corporate media that speaks for the elite, and against sexism, racism, imperialism, and neoliberalism. It’s also a fight to return the NHS into full public ownership.

A party of disgrace

There’s little need for me to list the many ways the Labour Party has consistently betrayed working-class people. Just put Keir Starmer’s name in the search option and you’ll find a lot of what you need to read. That party is an absolute disgusting and immoral charade. But despite not wanting to delve into that betrayal, the witchhunt against anti-racist campaigners and socialists within the party in recent years (that began under the Corbyn/McDonnell leadership) deserves special mention. Because it showed how cowardly that leadership was when its bravery was needed.

A similar style witchhunt was used to sack professor David Miller from his role at the University of Bristol. Miller also addressed the festival and clearly explained his sacking came as a result of his speaking out against anti-Muslim racism in the UK. He said “Muslims are continually under attack” and the Zionist campaign against him is actually in part about eradicating “the possibility that Muslims can be active in public life”. Miller believes Zionism is a form of racism.

But getting back to Labour’s witchhunt against socialism, former editor-at-large of The Canary Kerry-Anne Mendoza wrote in February this year:

Centrists have spent the past year continuing the chicken coup. They’ve purged the party membership of socialists with mass suspensions. They even aimed to decapitate the movement by suspending Corbyn on bogus pretexts. They’ve buried the Forde Report, and any hope of holding to account the centrist staffers responsible for racist abuse against BAME MPs and members. In short, they’ve made the party a hostile environment for anyone to the left of Margaret Thatcher.

It’s firmly my belief that Starmer has, should he so chose, the know-how to stand up to the Tory austerity government. He’s the leader of the opposition and former director of public prosecutions (DPP). Surely during that time he’s learned a thing or two about defence and attack? So it’s my belief he’s simply choosing not to. And he’s choosing not to because his agenda and that of the Tories are aligned. They’re aligned in terms of creating a friendly environment for the elite that comes at the expense of working-class people. In fact, Starmer’s time as DPP outlines how close he is to that establishment.

There’s nothing for working class people in the Labour Party. And given Labour’s history of supporting imperialism, there probably never was. And there’s certainly nothing in it for the delegates of Resist. Because, as the delegates at the festival know, simply attending Resist leaves them open to suspension from the Labour Party. I’ll put my neck on the chopping block here though and guess that’ll worry them not a jot!

As I said at the workshops I attended, the bad news is that it’s a long road for working-class people to reclaim power from the elite. But one possible advantage is that this means we can take our time. The next general election will be held sometime in 2024 at the latest. That, in all reality, leaves fuck all time to organise for proper change. It’s not enough time to mount a credible challenge against the establishment. And we also need to be clear about what we’ve learned from the Corbyn project.

So in that sense, the next election is already lost for working-class people. The 80-seat Tory majority may narrow, but then again it may widen. Starmer has made no impact. Those powers that be won’t be changing any time soon.

But when they do come crashing down, as they have done before and inevitably will do again, we need to be ready. And part of getting ready means changing the mindset from How do we win the next election? to How to we build the society we want? There are already existing alternatives we could look at to see what suits our needs. That’s going to take some time. But there’s never been a better time than right now to begin that work and Resist the powers that be.