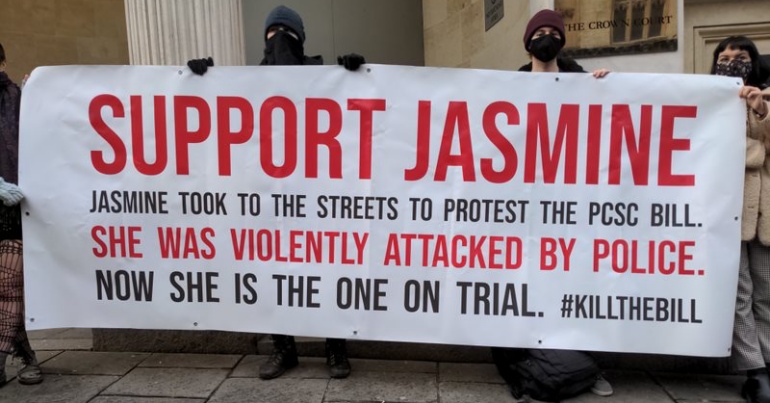 Crowds of supporters protested outside Bristol Crown Court in solidarity with Jasmine York on 31 January. York is on trial after being brutally beaten by police following Bristol’s Kill The Bill protest on 21 March 2021. On the first day of her trial, a jury heard that York is accused of both riot and arson, after allegedly wheeling a rubbish bin towards a police van that had been set alight.

York was just one of thousands who took to Bristol’s streets to demonstrate against the Tories’ draconian Police, Crime Sentencing and Courts Bill. The police’s heavy-handed tactics on the day have been well-documented, both in The Canary and in the mainstream press. The Canary’s Sophia Purdy-Moore witnessed riot police hitting protesters round the head with batons, while both the Guardian and Al Jazeera reported that York claimed to have suffered injuries including a dog bite and baton strike.

Judge Patrick urged the jury to “avoid any emotion” as they hear the evidence against York. He reminded them that it is a court of law, not a court of “morals”. Meanwhile, prosecutor Sarah Regan was keen to paint York as a ringleader of a “mob”. The prosecution showed lengthy footage of the course of events on 21 March, which culminated in three police vehicles being set on fire. Although much of the footage didn’t show York, Regan said in her opening speech:

it is clear from the footage that even from that early stage, Jasmine York saw herself, not as merely one of a crowd, or someone who was led along with the tide, but as a leader and instigator of what very quickly thereafter unfolded. Because throughout all of that part of events, she wasn’t at the back, or even in the centre of the crowd, but right at the front – directing the mass of people behind her in chants and in their obvious hostility against the police.

Footage showed York on camera. She shows her injured hand, and says:

I believe in the right to peaceful protest. My hand’s not very good…[I was] protecting a woman who was Black who got hit in the face with a baton.

Another clip was shown to the jury, where York showed her injury after being bitten by a police dog. Further livestream footage from York herself was shown to the court, and the jury heard her screaming:

York was just one of at least 62 people who were injured in a succession of protests in Bristol against the police bill between 21 and 26 March. Seven of those injuries required treatment in hospital, and there were at least 22 head injuries. Meanwhile, there was significant misreporting in the mainstream press. Avon and Somerset police falsely reported that officers had received broken bones on the 21 March before quietly retracting the allegations – but only after they had made national headlines. Avon and Somerset’s police chief quit his role after criticism of the policing of the protests although he claimed he made the decision before the events on 21 March.

If found guilty, York could be facing years in prison, while none of the police officers who brutalised Bristol protesters in March 2021 have been held accountable.

“A system that brutalises”

Campaigners travelled from across the country to show their solidarity with York. In fact, there were so many supporters that people were turned away from the packed court room. Speeches were made outside, including by Bristol Anti Repression Campaign (BARC), a group made up of a number of defendants and their supporters. BARC said:

In the backdrop of the rape and murder of Sarah Everard by a serving police officer, and the violent policing of the resulting vigils, thousands of Bristolians – including Jasmine – took to the streets of Bristol to protest against handing the police further powers through the PCSC bill.

On 21 March, demonstrators like Jasmine faced repeated and excessive violence from police officers. Indeed, the horrific injuries received by Jasmine at the hands of police have been widely disseminated in the media.

Jasmine has now been charged with riot and arson, and she could face a custodial sentence. We see this as an attempt by the state to intimidate and frighten those who dare to come together to resist against a system that brutalises and impoverishes us.

So far, 82 people have been arrested – most of them for riot – following the 21 March demonstration. 12 of them have now received sentences totalling over 49 years in prison, including Ryan Roberts, who was sentenced to a brutal 14 years in prison in December. The people of Bristol were outraged that an institution that thrives on misogyny, spies on women, and kills people in custody will get even more powers.

We stand beside Jasmine and all of the other protesters facing charges for taking a stand against police violence and repression. They have all of our love, respect and solidarity.

York was shown on video saying:

We pose a threat, people are powerful, the institution’s weak…power to the people.