The President of Turkey has launched a bloody coup against his own people, and it's happening right now - Canary 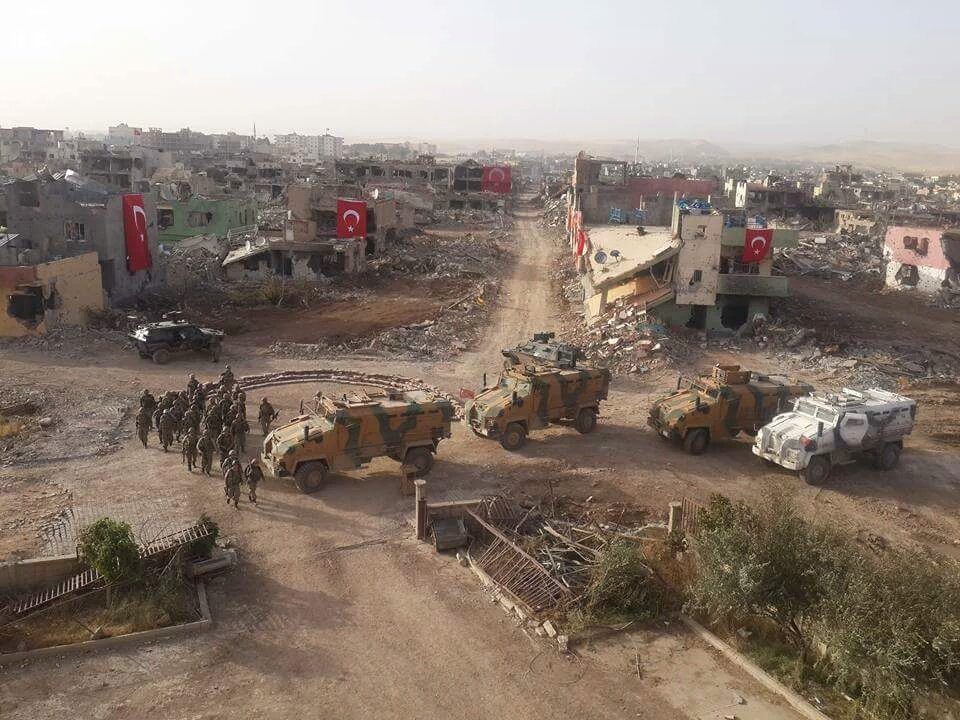 After a brutal military coup in Turkey against Erdogan’s presidency failed over the weekend, the Turkish president has responded in kind: with his own brutal coup against the Turkish people.

In the name of defending democracy from the original coup plotters, Erdogan is literally targeting tens of thousands of Turkish citizens. And standing in the firing line are not just his political opponents, but Turkey’s largest ethnic minority, the Kurds.

Purge on journalists has begun

On Monday, The Canary reported on a ‘blacklist’ of around 100 journalists whom Erdogan intended to ban.

On Tuesday, that process began, with reports that over 60 journalists have been dismissed from one news agency alone, the Cihan News Agency.

The purge of journalists has accompanied a massive crackdown on Turkey’s democratic institutions generally. Over 50,000 people have been sacked, suspended or even detained by the authorities from across the media, education sector, civil service, judiciary, military and security forces.

President Erdogan has described the actions as an effort to root out an alleged “parallel terrorist structure” made-up of followers of the exiled Turkish imam, Fethullah Gulen. But the purge has permitted Erdogan to crush his political opponents and shore-up his own power-base, endangering the fundamentals of Turkish democracy.

In another development, on Monday the Turkish ambassador to Bulgaria, Süleyman Gökçe, a defender of Erdogan, let slip that the list of the judiciary sacked by Erdogan on the day the military coup failed was drawn up long back. This will no doubt provide further ammunition to conspiracy theorists who believe the coup was engineered so that Erdogan could consolidate his hold on Turkish society even further.

As the purge accelerates, concerns are being raised by one of Turkey’s main opposition parties, the HDP, over the fate of Turkey’s highest profile political prisoner, Abdullah Ocalan, the head of the Kurdish Workers’ Party (PKK). Ocalan has often been likened to Nelson Mandela for the important role he could play in finding a lasting solution to the situation of Kurdish people in Turkey and elsewhere in the Middle East.

Kurds in Turkey are a long repressed minority who have faced state-sanctioned institutional discrimination and racism for decades, which have fuelled Kurdish demands for their own separate or autonomous state. This has led to ongoing armed conflict between the Turkish military and Kurdish separatists, resulting disproportionately in horrendous ethnic cleansing and massacres of Kurdish civilians.

In January, the UN Committee on the Elimination of Racial Discrimination warned that under cover of fighting terrorism, Turkey was engaging in racial profiling of the Kurdish community, including discriminatory application of laws curtailing Kurdish freedom of expression and association, and unwarranted arrest, detention and prosecution of Kurds.

PKK leader Abdullah Ocalan has not been seen for a year, but it was rumoured a month back that he had been moved from prison to house arrest.

Now, with President Erdogan taking revenge on all his enemies – not just the military that staged the recent coup attempt – there are understandable fears that Ocalan may be next to suffer the wrath of this ‘elected‘ tyrant.

Abdullah Ocalan was arrested in 1999 with the help of the CIA. He was convicted on charges of treason and separatism, and sentenced to life imprisonment. Many Kurdish people regard Ocalan as a resistance fighter, opposed to authoritarian rule and seeking Kurdish autonomy.

Ocalan was held for ten years in solitary confinement on the island prison of Imrali. In 2005, the European Court of Human Rights ruled that Ocalan did not receive a fair trial, but he has never been released.

In more recent years, Ocalan has advocated the ideas of US political philosopher Murray Bookchin – specifically that of Democratic Confederalism. The autonomous Kurdish region of Rojava in northern Syria now practises those ideas, which are basically grassroots socialism.

In 2013, Ocalan called on the PKK and the Turkish government to implement a ceasefire. This ceasefire was broken last year after Turkish forces, on Erdogan’s orders, began to persecute Kurds. Kurdish resistance soon followed – which many people believe was exactly what President Erdogan wanted.

Since the ceasefire ended, the Turkish authorities have attacked numerous Kurdish towns and cities, obliterating places like Cizre and Nusaybin. The result is a civil war with massacres that largely go unreported.

HDP demands an update on Ocalan

There have been no meetings with Abdullah Öcalan for more than a year. We do not know what is happening in Imrali island prison where Mr. Öcalan is imprisoned. We do not know what the putschist forces, who bombed parliament, have done in Imrali. Although the Justice Ministry made a short statement about Mr. Öcalan’s situation, it is far from being satisfactory. It is of an urgent nature for Mr. Öcalan’s family and lawyers to visit him. This needs to be done immediately.

HDP co-chair Selahattin Demirtaş blames President Erdogan for creating the conditions for the military coup. Demirtas urged people to defend themselves if attacked by Turkish state forces. He also called for a new alliance – a ‘democratic front’.

The upcoming days are very sensitive and critical. There are going to be some who engage in provocative actions on the streets. These actions must be exposed and defused. The streets don’t belong to those with Islamic State mentality. They belong to the people as a whole. People need to defend themselves where necessary. We believe we are going to overcome these days by struggling in a joint, democratic front.

Indeed, three of HDP’s regional offices were attacked within hours of President Erdogan hailing the failed coup as a ‘victory for democracy’.

The curfews and destruction of cities and towns must cease. The government must stop preventing the solidarity that is needed for the rebuilding of these areas. Furthermore the government, which sent today’s putschist forces to Kurdish areas to stop Kurds from exercising their democratic rights, must account for the decisions it has taken in the destruction of these areas.

The progressive Kurdish movement inspired by Ocalan has similarly called for a ‘democratic alliance’. In a statement issued yesterday, the Co-Presidency of the Kurdistan Communities Union (KCK) Executive Council said:

Portraying Erdoğan and the fascist AKP dictatorship as if they were democratic after this coup attempt is an approach even more dangerous than the coup attempt itself. Portraying the fight for power among authoritarian, despotic and anti-democratic forces as a fight between the supporters and enemies of democracy will only serve to legitimise the existing fascist and despotic government.

The statement added that the Kurdish people faced genocide:

If there is a coup against democracy, it is the one carried out by the fascist AKP government. The political power’s control over the judiciary, the implementation of fascist laws and policies through a parliamentarian majority, the removal of parliamentarians’ immunities, the arrest of co-mayors, the removal of co-mayors from their positions, and the imprisonment of thousands of politicians from the HDP and DBP constitute more of an actual coup. Kurdish people are under unprecedented genocidal, fascist, and colonialist attacks in Kurdistan.

The use of the term ‘genocide’ is not mere rhetoric.

For more than a year, Erdogan has brokered unofficial talks between Turkey and Syria on how, together, the two governments can prevent Kurdish autonomy like that implemented in Rojava in recent years. Two former high-ranking Turkish military officers, Dogu Perincek and Lieutenant General Ismail Hakki Pekin, met with President Assad in Damascus in February 2015.

Further visits to Damascus were made on three more occasions – in January, April and May of this year. They discussed Kurdish autonomy and how to crush it in both Syria and Turkey.

Another back channel was between Turkey and the Kurdish nationalists ruling in Iraq. Below is an extract from a cable, courtesy of Wikleaks, that shows how Turkish Interior Minister Beşir Atalay was in high-level talks with President Masoud Bazarni, the head of the Kurdistan Regional Government (KRG) in Iraq, on how they could work together to destroy the PKK. 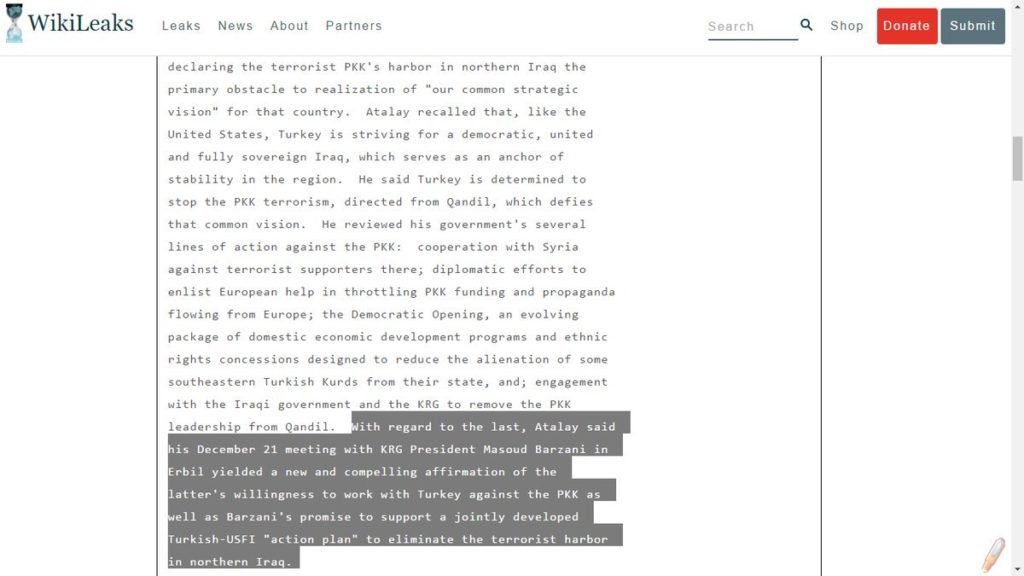 The weight of the evidence proves that what we are now witnessing is a coup within a coup – from which authoritarian powers across the region are set to benefit. The institutions of Turkish democracy, the opposition parties, and the Kurdish minority are all under threat like never before.