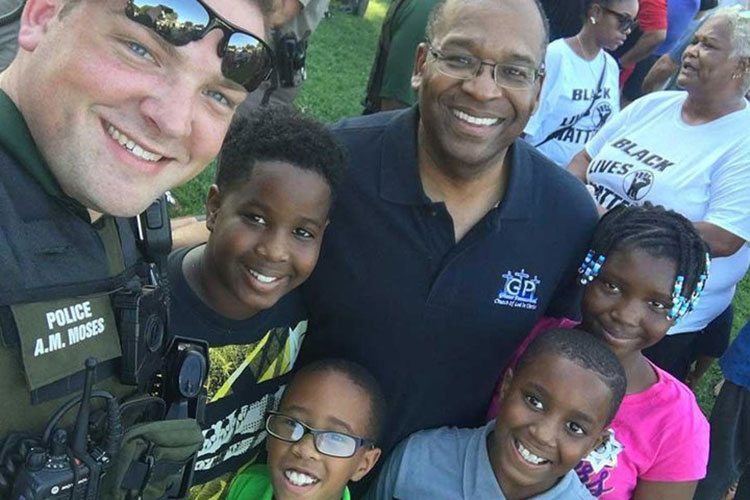 A Black Lives Matter (BLM) protest was planned in Wichita, Kansas, for the weekend of 18 July, in the midst of a particularly horrifying couple of weeks in the US.

After the deaths of two men sparked protests and a police backlash against protesters, there were more repercussions: a man with a sniper rifle killed five police officers in Dallas, and was then killed himself, followed by another gunman killing two more officers in Louisiana.

But after discussions with the local police department, the BLM protest transformed into a collaborative barbecue.

Unsurprisingly, the event has received a lot of attention from the US media, and has also been trending on social media.

Some of the photos taken by the police have seen criticism, however, including one which shows a young “unsmiling” man looking alongside several officers. However, the young man, MarQuell Woods, responded to the criticisms saying, via his Facebook page:

…[I was] playing ball with students from West High School. I should have smiled I guess but we had fun.

NPR reports that the Wichita Chief of Police “thanked those who came — and issued a challenge to other police departments to hold similar barbecues”. The police chief said:

It takes two parties to make a healthy relationship.

The organisers of the scheduled march met with Chief of Police Gordon Ramsay this week and decided to collaborate on a cookout in a local park, which also included a public forum where members of the community could ask Ramsay questions.

Hopefully, Ramsay also took it upon himself to ask the Wichita community questions – so valuable lessons could be learned by the police, from the community, too.

Pre-emptive collaboration between and within communities will undoubtedly help to support peace if  maintained. It’s not rocket science: People who know and understand each other are less likely to be afraid of, or attack each other.