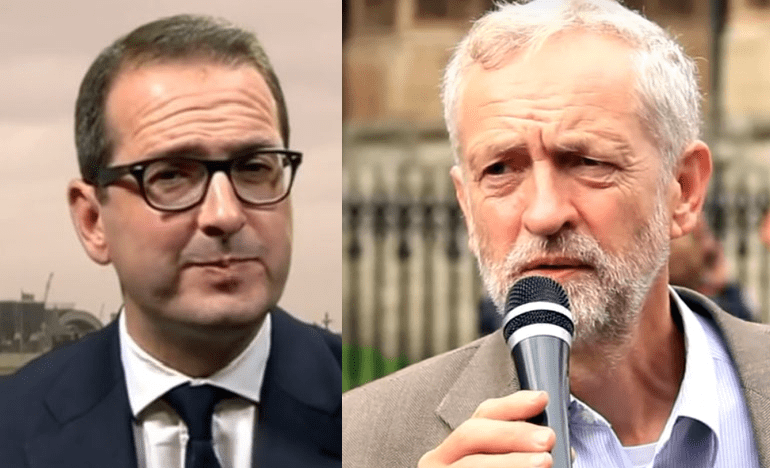 Angela Eagle has dropped out of the Labour leadership campaign, leaving Owen Smith as the only candidate to challenge Jeremy Corbyn.

Unfortunately, Smith has chosen to begin the one-on-one contest with a disgraceful smear, suggesting Corbyn has “encouraged” antisemitism, racism and misogyny within the Labour party.

The MP for Pontypridd opened his attack with the following:

We have had a massive problem recently with misogyny and intolerance in the party, anti-Semitism, racism and the awful way in which women in the Labour movement have been treated. It’s been appalling to witness this, heart-breaking.

But a spokesman for Corbyn denounced the accusations, stating:

Jeremy has consistently condemned all violence or abuse and called repeatedly for a kinder, gentler politics.

He was the first leader of a political party to launch an inquiry into anti-Semitism and other forms of racism in their own party.

Most significant is the conclusion from the inquiry. Flying in the face of the entire establishment media coverage back in May, this is the verdict:

The Labour Party is not overrun by anti-Semitism.

Hence, Smith has proven that he is more than willing to discard values in order to score political points. It seems that to Smith, it does not matter if the antisemitism ‘crisis’ was fabricated when it could help him secure the leadership.

Despite attacking Corbyn for the way women have been treated, the leadership hopeful’s own record is not squeaky clean. For example, Smith told Plaid Cymru leader Leanne Wood that she got invited onto Question Time because of her gender.

Smearing Corbyn as antisemitic is not a new tactic from his opponents. As Kerry-anne Mendoza previously summarised:

It appears that enemies of Jeremy Corbyn’s progressive plans for the Labour party have discovered some common ground. Blairites within the party and the media, along with their conservative peers and the pro-Israel lobby, all lose out if Corbyn succeeds. So, in short, they are seeking to take him out of play by hitting him where it is mutually beneficial – his long-standing criticism of Israel’s illegal occupation of Palestine.

The efforts to deliberately confuse anti-Zionism (criticism of the political movement to establish an apartheid Jewish state), and antisemitism (the prejudice and persecution of Jewish people) are longstanding.

Attempting to smear Corbyn as racist, antisemitic or misogynist will be particularly outrageous for his supporters and Labour members who are aware of his history. Corbyn has fought racism and prejudice his entire life.

The Labour leader was so dedicated to opposing the apartheid regime in South Africa that he got arrested for protesting. And it’s not just racism Corbyn has consistently stood against, he has fought for LGBTQ+ rights since he entered parliament when doing so was far from mainstream and considered ‘loony’ by many.

And it’s exactly this consistency that resonates with his supporters – it emanates trust.

Whereas, although Smith insists he is a politician of “conviction”, there are many instances where he has appeared to have U-turned or made contradictory statements.

Resigning when the country needs security

Everyone has their favourite Owen Smith U-Turn…… This is mine… What's yours? pic.twitter.com/IXnj0PVmc8

After condemning Cameron for resigning after Brexit, Smith did exactly the same in an attempt to topple Corbyn. Just when the country needed a strong and united opposition, Smith and his fellow plotters decided to launch a coup against their democratically elected leader through a carefully coordinated series of resignations, public statements and PR stunts.

Joining the CND and then voting for Trident renewal

Smith has cited his former membership of the Campaign for Nuclear Disarmament (CND) in order to appeal to Corbyn supporters. Yet, he has repeatedly voted for Trident renewal – saying he is for “multilateral disarmament”. But considering only nine out of 196 nations have nuclear weapons, the argument that ditching Trident constitutes “unilateral” disarmament does not hold up. We would be joining the majority of the world in not having nuclear weapons, not vice-versa.

Smith said he would be prepared to use weapons of mass destruction, even though the decision of whether to use Trident ultimately lies with the US – the nukes are paid for by us, but controlled by Uncle Sam.

Smith has positioned himself as an anti-austerity candidate. However, he has not been consistent on this – only last year he abstained on the 2015 welfare bill, which allowed the Tories to make a further £12bn of ideological cuts to public services.

And on Sunday, the leadership hopeful told Andrew Marr:

Since throwing his hat in for the leadership, Smith has said that he is committed to a fully public NHS.

But he supported Tony Blair’s outsourcing of minor operations to private providers. Smith also previously worked as a chief lobbyist for the UK’s biggest biotech firm Amgen. And before that, he worked as a lobbyist for the pharmaceutical giant Pfizer and argued patients should have greater “choice” in the NHS.

Considering how often Smith has flip-flopped, it may prove difficult for him to convince Labour voters that he is engaged in a genuine campaign. Many will also raise eyebrows at his judgement after he referred to Blair as a “democratic socialist” back in 2006.

Smith’s shameless, ungrounded, smear against Corbyn shows that he is ready to disregard values for power. It’s not a very good look for someone presenting themselves as Labour’s ‘unity candidate’.