ISIS 'minister of war' was trained by the US military - Canary 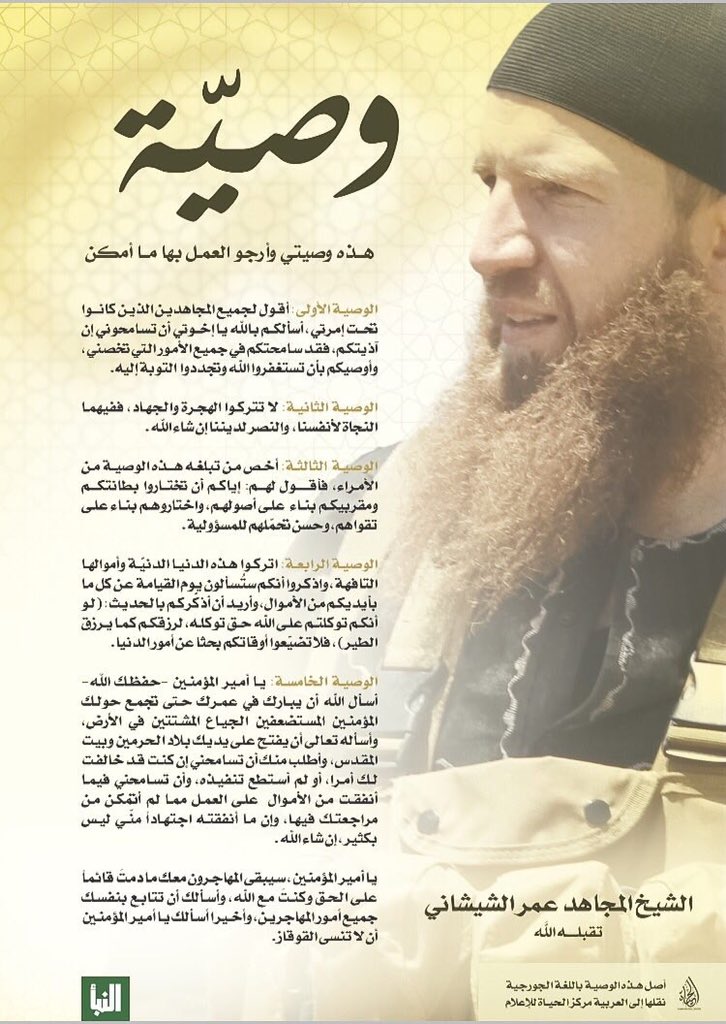 The deceased supreme military commander of Daesh (Isis/Isil), Abu Omar al-Shishani (‘Omar the Chechen’), didn’t have a beard when he was trained by the US military. He trained under US instructors while previously enlisted in the Georgian military (as in the Caucasus), and the Georgian army’s strict military appearance code doesn’t allow beards among service members.

The Daesh weekly newsletter, al-Naba, has recently confirmed the death of the ginger-bearded terrorist who has been described as having “nine lives” for the fact that he’s been falsely reported dead multiple times in international headlines over the past years.

But it seems to be real this time. Issue #39 of al-Naba gave a “last will and testament” of sorts, supposedly Omar’s final admonition to his followers, along with an article-length biography attempting to seal his legendary status among Daesh jihadists as a “high mountain” within their so-called ‘caliphate’.

The propaganda newsletter omitted an inconvenient phase of Omar the Chechen’s life, however, which if included would be sure to taint the “ideological purity” of the iconic leader of anti-western jihad: Omar took every bit of US and UK assistance he could get early on in the Syrian war, even as late as 2013.

Trained by the US while in the Georgian military

Born Tarkhan Batirashvili, Omar didn’t begin his military career in some remote jihadi training camp, but under the close watch of US military advisers when he was a sergeant in US ally Georgia’s elite special forces beginning in 2006. This was well-documented in a 2015 investigation by McClatchy journalist Mitchell Prothero, and headlined across the US at the time with titles such as:

‘Star pupil’: Pied piper of ISIS recruits was trained by US

Batirashvili, who came from a mixed Georgian-Chechen family in the small Muslim enclave of Georgia’s Pankisi Gorge region, fought the Russians in the 2008 Russo-Georgian War. It was during this time that a team of journalists, including McClatchy‘s Prothero, encountered the man who would one day emerge as Daesh leader ‘Omar’ with his Georgian military unit. In an article featuring a photo of the meeting, Prothero recounts:

That’s when we noticed that several members of the unit had American military Combat Infantryman Badges on their right shoulders from the 82nd Airborne.

A Georgian defence official more recently boasted to Prothero about how it is that Batirashvili went on to super stardom as such an effective jihadi fighter on the Syrian battlefield:

We trained him well, and we had lots of help from America.

Such awkward quotes of course did not make it into the Daesh newsletter’s glowing profile of Omar.

Fighting under a US- and UK-funded FSA council

Omar reportedly entered the Syrian battlefield via Turkey at some point in 2012 in order to wage jihad against the Assad government. His first documented appearance in a major battle came in the summer of 2013 just as the Free Syrian Army (FSA) was engaged in a lengthy siege of the Syrian government’s Menagh Airbase.

Months prior to Omar’s entry into the Menagh campaign, he was appointed “northern commander” for Daesh, according to the US Department of the Treasury. He and his mostly Chechen-filled Daesh unit, known as Jaish al-Muhajireen wal Ansar (‘Army of Emigrants and Helpers’), fought under a coalition led by FSA Col. Abdul Jabbar al-Okaidi, head of the Revolutionary Military Council of Aleppo.

It was widely reported at the time that Omar’s men, who proved themselves willing to be sacrificed in suicide bombings, tipped the scales against Assad forces at Menagh and brought victory for the FSA’s Okaidi.

Okaidi has since been described by The Telegraph as:

One of the most senior Syrian rebel commanders to be backed by Britain and the United States.

Okaidi and his Aleppo military council had been funded by the US and UK governments at the very time Daesh commander Omar the Chechen fought within its command structure.

Even at the time, collusion among all these strange bedfellows was no secret. In 2013, The New York Times described the western-backed FSA and Daesh battlefield alliance as making up a “victorious basketball team” two days after the fighters posed for pictures and did media interviews. This was at a time significantly before Daesh became a “household brand” known around the world.

A photo op which revealed too much

The US Ambassador to Syria at the time, Robert Ford, had to eventually issue a public apology of sorts for a photo op with the very man who exercised operational command over Omar’s unit. Ford’s posing with the US/UK-backed Col. Okaidi – who himself was filmed with known Daesh fighters – had caused embarrassment in Washington.

The below screenshots, published on University of Oklahoma professor Joshua Landis’ Syria Comment (widely considered the foremost academic site in the world for analysis of Syria), show the US Ambassador with Okaidi – who in turn is shown with Daesh officer Abu Jandal (identified by The New York Times) – and is used here with permission:

Al Jazeera footage from the same day, with Abu Jandal beside Col. Okaidi, would show Jandal as part of Omar the Chechen’s entourage – all of these men fought under the FSA Aleppo military council’s command structure – with the backing of US Ambassador Ford and the UK.

In Omar’s farewell al-Naba bio, Daesh propagandists chose to omit the inconvenient truth that their ranks rode the wave of western financial and military support early on in the Syrian war (even if by proxy). But western politicians, eager to promote a ‘war on terror’ narrative which sees America and Britain as shining beacons in an eternal struggle of good against evil, would also prefer some things left unrecorded by history.

The English language version of Daesh’s al-Naba records one of Omar the Chechen’s final exhortations:

I direct this to whomever of the commanders it reaches. I say to them: Beware of choosing your entourage based on close relationships.

Little will the foot soldiers know what their ‘ideologically pure’ leaders were up to. Let that be a lesson for the West to reflect upon as well.

See below the brief video documentation by the “Eretz Zen” channel, which provides raw footage with English translations of Daesh fighters with the US/UK-backed Col. Okaidi in 2013, who elsewhere stands with US Ambassador Ford. The footage and translation has been authenticated by Dr. Joshua Landis, head of Middle East Studies at the University of Oklahoma: