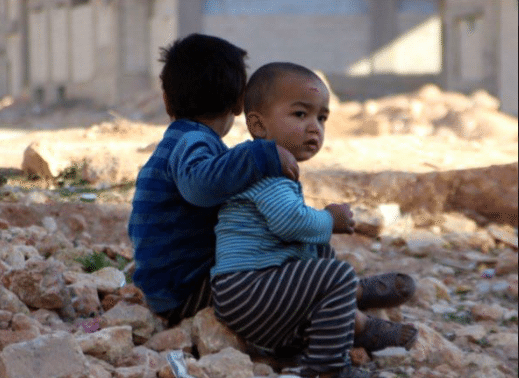 After moving on Aleppo to break a deadly siege, ‘rebels’ have succeeded after launching a full-on offensive on the battered and hungry city. This is not the first time Aleppo has been at the front line of an offensive or under siege, but this is the worst it has suffered.

The battle ensuing in the north-western metropolis is essentially the microcosm of the Syrian conflict, where all the players are vying for their stake in the war: international, proxy, regime, and opposition. And the humanitarian crisis has been exploited for political gain because what happens in Aleppo is so important to the endgame.

The most populous and largest city in Syria, Aleppo has been under a tightened siege since 11 July 2016. The eastern part of the city, controlled by the Islamist-led opposition, was besieged when the government cut off the main supply road – Castello – through constant shelling and airstrikes.

The offensive has relieved the previous dire humanitarian situation. Cutting off supply routes into the city, estimated to be holding 250,000-300,000 civilians, has meant that much-needed additional medical supplies were not able to enter. Food prices skyrocketed before supplies diminished completely.

An Aleppo resident described the situation on BBC Radio 4 and said that even basic food had completely disappeared, that there was no milk in the market for the children, and that there was no way of sustaining themselves because there was no agriculture. Life outside on the streets was desolate, as residents tried to take refuge inside their homes. But constant shelling from Russian warplanes, he said, meant that “between 25-30 civilians are killed every day”.

The idea of having a humanitarian corridor was offered by the Syrian government, but this idea received wide condemnation from a number of non-governmental organisations (NGOs) at the time.

Rebels have now been able to send in food to relieve the situation.

After 30 days of Siege, East #Aleppo gets first aid convoy, not from UN, but nearby rebels. Via @nadamant pic.twitter.com/2gnSiJr5hj

The assault to break the siege was launched by Islamist-led opposition groups on 31 July.

The rebel objective was to reconnect the east, encircled by government forces, with the territory in the West, under the control of rebel fighters.

The rebels set off a tunnel bomb under army positions in Ramouseh and placed the regime forces under fire. Gaining access to the military complex provided them access to armaments.

Now they have broken the government siege, they are moving forward onto further government-held territory, but have come under air attack from government forces.

At least 50 rebel fighters and jihadists had been killed since the operation began on Sunday, as well as dozens of government soldiers. Two camps for internally displaced persons (IDPs) have also been hit.

The opposition aren’t just the Free Syrian Army (FSA), which western governments actively supported initially to oust Assad. A key partner in the offensive on Aleppo is Jabhat al-Nusra, a former al-Qaida affiliate which rebranded itself recently as Jabhat Fateh al-Sham, along with an alliance of Islamist/jihadist groups which are fighting together in order to strengthen the alliance to topple Assad.

The initial decision to lay siege to the city was made in Tehran by Iran, Russia and Syria, so that regime forces could liberate northern territories from the rebels.

This offensive was crucial for the opposition, displayed through its scale and reach. It is the last urban centre they have not lost to the regime, including Damascus. Losing Aleppo would be a loss they could not come back from.

Aleppo has also exposed the intentions behind all parties to the conflict.

According to experts at the Rafik Hariri Centre for the Middle East, Russia wants to see its ally (Assad) stay in power. As well as committing significant military assets, Assad is willing to engage in the diplomatic process and talk about the cessation of hostilities. If the US concedes and abandons efforts to topple Assad, it would be a victory not just for Assad but for Russia.

Iran’s proxies (Hezbollah, Iranian Shia militias, and local National Defence Forces) are concentrating on the areas around Aleppo to protect the regime’s control of the city – a regime they are ideologically aligned with.

Meanwhile, the US is supporting Kurdish-led secular forces in the fight against Daesh (Isis/Isil). But these militias are not simplistically aligned with the rebels, and they took advantage of Iranian and Russian firepower earlier this year to cut off Islamist supply lines with Turkey.

The US and the coalition of allies for the Islamist-led opposition did not envisage that the regime would encircle the city. The Hariri Centre says this may indicate that they believe Aleppo is an acceptable loss. It’s not surprising there has been little appetite to lift the siege, given that the coalition’s main goal is to defeat Daesh.

Turkey and regional Arab states, however, want to actively help opposition groups that have ideological similarities. Turkey also wants to prevent the expansion of the Kurdish-led autonomous region of Rojava in northern Syria.

This is not just a battle between a government and its opposition. What’s happening in Aleppo is the centrepiece of what has become a complex war zone that’s allowed regional powers to flex their geopolitical muscles and use local proxies to engage in bloody battles, while airdropping gifts of destruction from the sky.

The outcome of the struggle for Aleppo will likely be a strong indicator of who, ultimately, is winning the war.

Read more of The Canary‘s international reporting in The Canary Global.

Contribute to humanitarian relief in Syria by supporting charities like:

Learn more about human rights abuses in Syria through the website of the Independent International Commission of Inquiry of the Syrian Arab Republic.