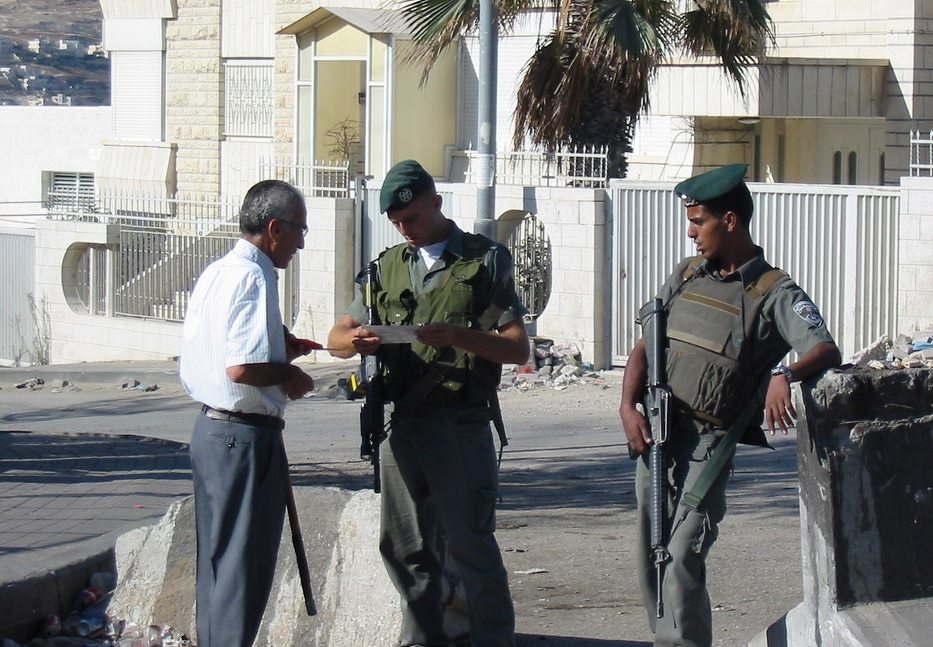 The Israeli government has been spending its cash plastering a sponsored post all over Facebook about a Palestinian ‘scandal’. But its story is, as it stands, baseless and without evidence. It does, though, have incredible value, as it shows the depths to which the Israeli government is willing to plummet in order to ensure Palestinians are well and truly hung out to dry.

Posted on Facebook by the Israeli Ministry of Foreign Affairs, the story hinges on a recent arrest of a Palestinian United Nations Development Programme (UNDP) employee: 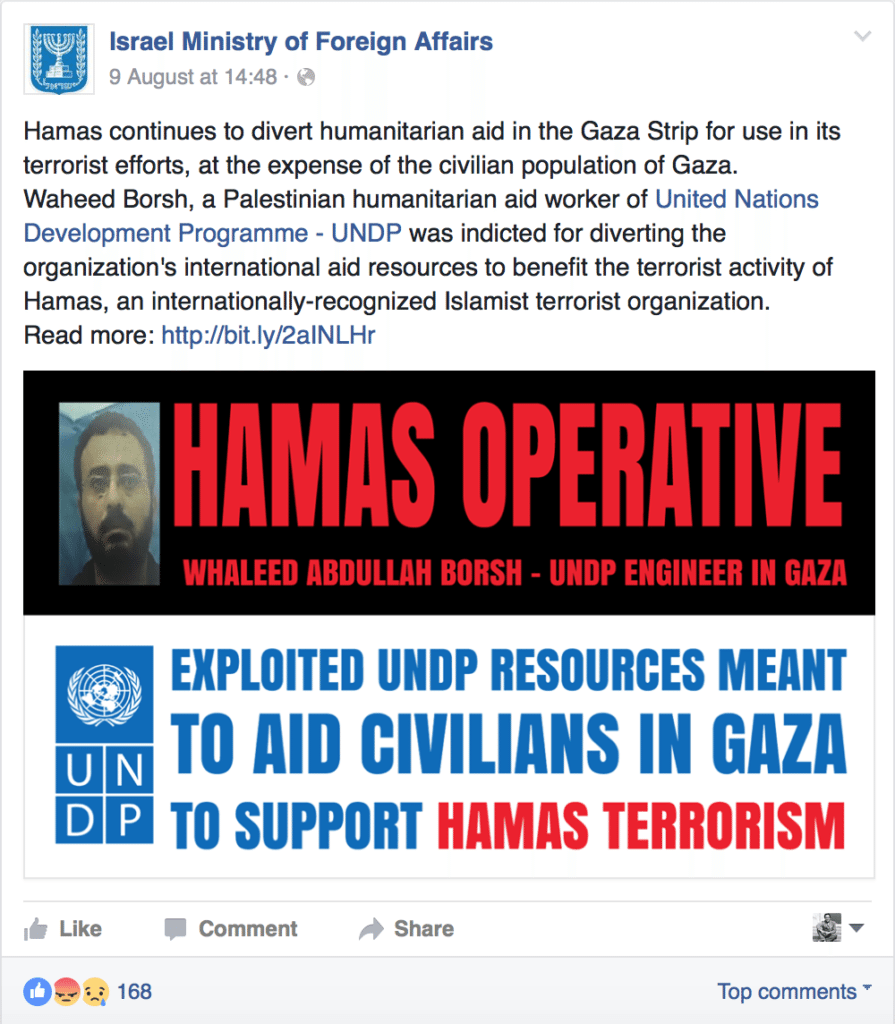 As the post explains, the Israeli government alleges that Waheed Borsh, the UNDP worker, has been “diverting the organisation’s international aid resources” to Hamas, which currently controls Palestine’s Gaza Strip.

The post calls Hamas “an internationally-recognized Islamist terrorist organization”, and the US and its EU allies have indeed designated it as such. But it is also the democratically elected government of Gaza, and labels itself “a national resistance movement”.

The UNDP’s aid programme in Palestine aims to:

improve the economic and social conditions of the Palestinian people by identifying their social and economic needs and by establishing concrete projects to that end.

In Gaza specifically, it began a two year strategy following the 2014 Israeli assault in the area – ‘Operation Protective Edge’, which left over 2,000 Palestinians dead, 475,000 displaced, and massive destruction of Gaza’s infrastructure. Its mandate is assessing needs, clearing rubble, repairing infrastructure, creating income and jobs for the population, and supporting governance.

The Israeli authorities claim that the 38-year-old UNDP employee was instructed by a “senior member” of Hamas to ensure that some of the organisation’s work, namely the rubble it collected, was used to “build a military jetty in the northern Gaza Strip” for the group, and to convince the aid agency “to prioritise the rehabilitation of housing in areas populated by Hamas members”. For this, Borsh has been “indicted”.

But despite the Israeli authorities’ assertive language, ‘indicted’ does not mean ‘convicted’. It means he is accused of the deed, but it is still to be proven that the deed was done.

The UN has announced it will undertake its own investigation into the allegation. It said it has “zero tolerance for wrongdoing”, but insisted it has “robust measures in place to ensure that the rubble, which is removed and crushed, goes to its intended purpose”.

It also acknowledged how small the amount of rubble was that Borsh allegedly sidelined for Hamas’ benefit (according to the Israeli government), when all the rubble the UNDP has dealt with is considered:

The allegations concerning Mr Borsh by the Israeli authorities refer to 300 tonnes of the more than one million tonnes removed, or seven truckloads out of a total of nearly 26,000

For Israel’s part, its investigation thus far appears to be pretty thin. It has released no figures for the diverted funds that the accused employee allegedly used. Nor has it provided any details of where in Gaza all the new ‘Hamas homes’ have been built. It has not even been able to produce evidence of Borsh’s affiliation, through membership, with Hamas.

In fact, all of the assertions seem to be based on a confession authorities managed to obtain from Borsh.

Israel has a notorious reputation for using torture to elicit confessions, even from children. In fact, a senior Israeli defence official openly admitted earlier this year that torture ‘has to be used’ in certain cases. In March, the UN Committee Against Torture demanded that Israel outlaw the practice.

Confessions obtained through torture are rarely accurate, as the US Senate’s 2014 torture report illustrated. And the fact that the US case for the 2003 invasion of Iraq was strengthened by dodgy evidence gained through torture shows the catastrophic outcomes of the immoral practice.

Thankfully, Israeli lawmakers are currently trying to pass a bill that would invalidate confessions obtained through torture. But whether that bill could have any bearing on this case is unknown.

It’s all about motive

Hamas has responded to the allegations. Its spokesperson Hazem Qasem said:

These Israeli claims are baseless and the purpose of these claims is to justify the continued siege on Gaza.

That siege involves a naval blockade in the area, ensuring the Israeli government controls every inch of Gazan life. It restricts the freedom of movement in the area, the amount of goods and materials that enters, and the quality and quantity of essential supplies such as electricity and water.

Israel has even put the Palestinians in Gaza “on a diet” through the siege. It has determined how many calories the population needs to stay alive but not “flourish“.

Due to this, as the United Nations Relief and Works Agency (UNRWA) reported in July, around 80% of Gaza’s citizens are dependent on aid “to meet their basic needs”.

And it is exactly this aid that the Israeli authorities are now taking aim at. Borsh’s case is one of three recent accusations by Israel against aid organisations. One case saw the Gaza head of US-based NGO World Vision under suspicion for diverting funds to Hamas. Following the allegation, Australia and Germany have suspended funding for the aid group. Electronic Intifada says the claims look like “sloppy propaganda” given that Israel’s sums apparently “don’t add up” and that Israel is allegedly relying on a “confession” obtained by “an intelligence agency which is notorious for using torture”.

Essentially, Israel is attempting to tar aid agencies as proxies for Hamas who merrily snatch supplies “at the expense of the civilian population of Gaza”. By doing so, that aid is put at risk, and with 80% of the population dependent on aid, losing it would be devastating.

And that’s exactly what this evidence-free, sensationalist propaganda may achieve if these assertions are not challenged.

– Learn about the Boycott, Divestment, and Sanctions (BDS) movement.