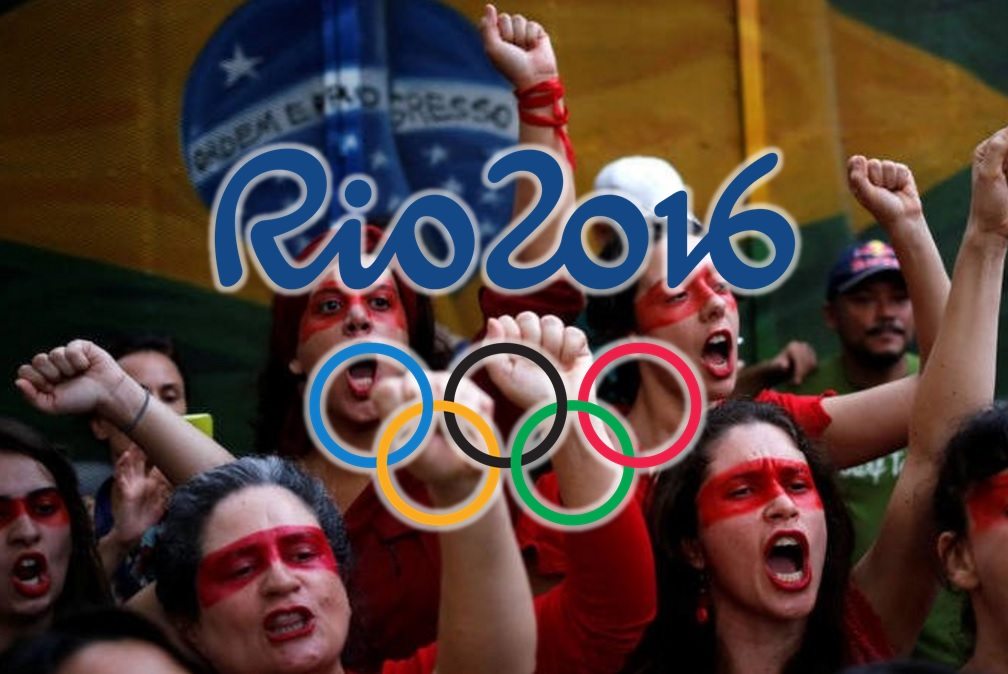 The Rio 2016 Olympics have already made history, championed equality, and brought international rivals together. But they have also brought to the forefront the major political crisis unravelling behind the scenes in Brazil.

Brazil’s controversial Olympic saga began with poor families being pushed out of their neighbourhoods in order for new facilities (and eventually private luxury developments) to be built. In fairness, many inhabitants took payouts and new public housing, but this gentrification exposed the elite-focused attitude of those planning Rio 2016.

But the main political issue rocking Brazil at the moment is a legally questionable takeover of power by representatives of the country’s political and economic establishment. And in recent weeks, the scandal has got much worse, with the country’s mainstream media being accused of actively trying to manipulate public opinion.

This year’s Olympic Games have already seen numerous demonstrations of opposition to this coup, and even a buttock-related protest from a torch bearer. But why exactly are they so mad?

The root of the problem

Rio 2016 very much played a part in the elite coup that shook Brazilian politics in May, when President Dilma Rousseff was removed from office pending impeachment hearings related to the alleged concealment of an increasing budget deficit. As this process was led by corrupt right-wingers and came after months of media-incited protests, Rousseff and her sympathisers called this process “a coup attempt“.

Rousseff’s party, the left-of-centre Workers’ Party (PT), had previously ruled Brazil since late 2002, lifting around 50 million people out of poverty and becoming (according to the UN) “a champion in the fight against hunger”. The PT also increased health and education spending significantly. But the PT also tried to reconcile capitalism and socialism, as Alex Cuadros describes in his book Brazillionaires: Wealth, Power, Decadence, and Hope in an American Country.

The Olympics are actually emblematic of the bad decisions that helped to lead Brazil to the state it’s in now… the Workers’ Party thought they had reinvented economics. They got cocky. And they saw these big sporting events, the World Cup and the Olympics, as good for everyone: ordinary citizens who would get better infrastructure… and billionaire-owned construction giants who happened to be major campaign donors. In the end, though, Brazil ended up with fancy stadiums it didn’t need, even while many poor Brazilians still lack basic sanitation.

But while Brazil’s economy stalled in 2013 and Rousseff was only re-elected in 2015 thanks to a shaky electoral alliance, the PT’s mistakes were not the only reason for May’s coup.

a core objective of the impeachment… was to empower the actual thieves in Brasilia and enable them to impede, obstruct, and ultimately kill the ongoing Car Wash investigation [an investigation focused on money laundering and bribery related to state oil contracts]

And indeed, a third of Temer’s chosen cabinet (full of white men with corporate interests) was implicated in the probe, with leaked recordings soon showing that one of his closest allies had actually conspired to remove Rousseff in order to stop the investigations. The cabinet also set about slashing public spending and promised to prioritise the privatisation of state industries.

Despite horrifically low approval ratings and popular opposition to the coup, Temer’s new regime had powerful friends in the media.

The Intercept, which created a Portuguese version of its site specifically in response to the coup, has been at the forefront of English-language coverage of the events. And on 19 July, it led with the headline:

This paper – Folha de S.Paulo – had carried out a poll of public opinion, but had seriously manipulated the results. As Greenwald and Erick Dau wrote, the media outlet had sought to:

manufacture headlines and false narratives to suggest that a large portion of the country supports the individual [Temer] who seized power undemocratically when they plainly do not.

Two days later, in a follow up piece, they revealed that:

the paper’s polling firm, Datafolha, had issued a press release with the published data announcing that 60 percent of Brazilians actually want new elections.

But Folha had previously claimed that only 3% wanted new elections. It had also insisted that 50% of Brazilians wanted Temer to remain president, although Datafolha had asserted that at least 62% wanted him to go immediately.

This was proof, The Intercept argued, of “absolute journalistic fraud”. It concluded:

motives aside, what is now beyond debate is that Folha misled the country in fundamental ways about this generation’s most consequential political conflict and hid from the public vital evidence that they only admitted existed once they got caught red-handed doing all this.

See some images of the protests here:

There's something about Copacabana beach that takes the edge off any protest, whether be left or right #Brazil pic.twitter.com/w9FIat1pNn

#Brazil: 'Welcome to chaos' protest of teachers on strike at airport in #Rio2016. #Olympics https://t.co/qmhRf9q2vT pic.twitter.com/MvSCjhUG74

– Read more about the Olympic Games’ mission for peace in the world.

– Support The Canary as we seek to amplify the voices of the voiceless.