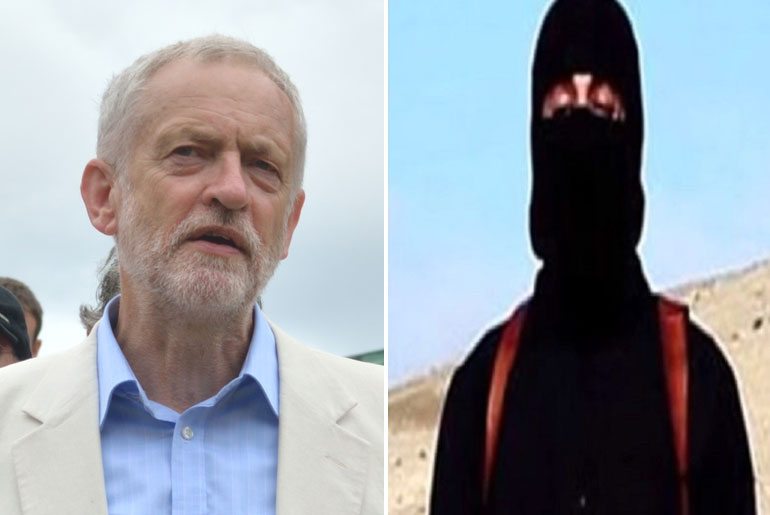 A leading Labour Party figure has branded Jeremy Corbyn supporters “jihadists” in an online rant about members being allowed to vote in the leadership election.

Tim Macpherson, the Chair of Bexhill and Battle Constituency Labour Party (CLP), tweeted the abuse after a High Court Judge ruled, on Monday, that the National Executive Committee (NEC) rules on voting in the leadership election were invalid.

In the hearing on 8 August, the claimants (four adults and one minor) argued that the six-month membership condition, imposed by the NEC, was in breach of the Labour Party’s constitution as set out in its 2016 rule book. This would then make the NEC in breach of the contract that mutually binds members of the party.

The Labour Party, represented by its General Secretary Iain McNicol, argued that the freeze date is also written into the rule book. Therefore, the NEC has a right to use it as they see fit.

But the judge disagreed with McNicol’s assertions and ruled in favour of the members. This now allows anyone who became a member after 12 January to vote in the leadership election. The NEC are appealing the decision on Thursday, although as The Canary previously reported, it appears unlikely they will win.

Macpherson, who also stood as a prospective parliamentary candidate for East Worthing and Shoreham in last year’s general election, was obviously unimpressed with the judge’s verdict, and took to Twitter to announce his disdain: 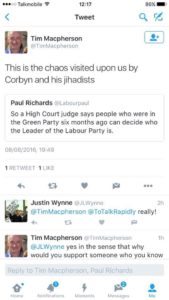 The tweet has since been deleted, but Macpherson does try to explain his inappropriate comments:

But he appears to want to just dig a deeper hole for himself, branding Corbyn supporters “wierd” (sic):

This is not the first time Macpherson has voiced his contempt for the Labour leader. As the Bexhill Observer has reported, during the height of the Labour coup, he took to Twitter to say that “He [Corbyn] is not up to the job, he sabotaged the Labour In campaign and voters hate him what more do you need?”

It would appear that, despite allegations of some Corbyn supporters being abusive, those who want the Labour leader to be deposed can be just as unpleasant. While slanderous comments like Macpherson’s might be expected from Conservatives, Labour members might hope not to see the same type of comments from supposed Labour supporters.

As The Canary Editor-in-Chief Kerry-anne Mendoza wrote on Monday:

Those behind this coup can choose to turn this into a war of attrition … Or they could do something truly radical. They could dust themselves off, smell that the winds of political change are blowing, and direct their considerable platforms to supporting the anti-austerity, pro-democracy policies of their party and leader. They could, in short, act like grown-ups.

With Corbyn looking like he will almost certainly claim victory in Labour’s upcoming leadership contest, and his grassroots support from members and CLPs as strong as ever, leading Labour figures like Macpherson may do well to start considering their future positions, and those of the Labour Party more broadly. That is, uniting behind their elected leader and doing what they should have been for the past few months. Fighting our disastrous Tory government.