Is a Labour split imminent? This fresh evidence suggests the Blairites say 'Yes' - The Canary 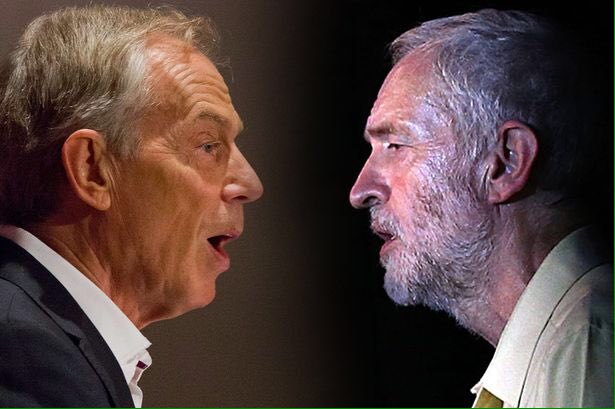 A group of high-profile New Labour figures have set up a ‘war chest’ to help fund the ‘centre’ ground of the Labour Party, seeking to take the party “to a place much better than the one we are in now” and calling for “a major step-change in how our party is led politically, organised nationally and funded”.

‘Labour Tomorrow’ is a registered company, set up on 1 April. Incorporated by Nicola Murphy, the company soon appointed David Blunkett and fellow Labour peer Baroness Dean as directors on the 28 June, in the midst of the attempted Labour coup. While the company itself has registered a domain name (www.labourtomorrow.co.uk), the website is not yet up and running.

Blunkett was one of the most high-profile members of Tony Blair’s administration. Having served as MP for Sheffield Brightside and Hillsborough from 1987 until last year’s general election, he sat in Blair’s Shadow Cabinet before taking on the education brief in the New Labour government. The roles of Home Secretary and Secretary of State for Work and Pensions followed.

He was previously a member of Labour’s National Executive Committee in the early 1980s, supporting leader Neil Kinnock in his expulsion of the left-wing group Militant from the party. This group’s successors are back in the news now, after Tom Watson accused the Socialist Party (SP) of being the “Trotskyists” he had accused of trying to infiltrate the Labour Party. SP General Secretary Peter Taaffe was a high-profile figure in Militant during the 1970s and 1980s. He denounces claims that Militant were “Trots”, citing the fact that they were at the forefront of fighting Margaret Thatcher’s poll tax. Furthermore, Liverpool Council (when run by members of Militant) was one of the few to stand up to Thatcher’s aggressive programme of funding cuts.

Baroness Dean was the General Secretary of the Graphical and Allied Trades (SOGAT), the printing, publishing and paper trades union. She too worked under Blair, as a minister in the Foreign Office, the Ministry of Defence, and then in Trade and Investment. She is currently a member of the Privy Council for the House of Lords.

Perhaps the most interesting character, though, is Labour Tomorrow’s founder, Nicola Murphy.

Murphy’s background is just as Blairite as Blunkett’s. A former Treasury adviser to Gordon Brown, she is married to Chris Leslie MP, a minister in Blair’s government before losing his seat as MP for Shipley in 2005. Their 2005 wedding was described as “an all-New Labour affair”. Leslie went on record denouncing Corbyn during the attempted Labour coup, saying:

I would say today he does need to consider his position and think about whether he should do the honourable thing … Every MP’s going to have to search their conscience about it. I think I would need an awful lot of persuading to have confidence in Jeremy’s leadership to go into a general election.

A browse of Murphy’s Twitter feed suggests she agrees with the likes of journalist Dan Hodges, MP Rachel Reeves, and Blair’s former spin doctor Alastair Campbell. Murphy was also embroiled in a “cash-for-access” scandal, where it was reported that individuals were paying up to £181,000 for a tour of Downing Street and a photo opportunity with then Prime Minister Gordon Brown.

On 26 July, Blunkett and Dean penned an editorial for LabourList about Labour Tomorrow. In it, they wrote:

This is the greatest crisis in our party’s history and the outcome is impossible to predict. What is clear though is that it will not be a happy one unless there is a major step-change in how our party is led politically, organised nationally and funded.

They went on to discuss how Labour under Corbyn was essentially asking people to “back a losing team”. They spoke of the “financial support” needed for “effective activist networks, political blogs, smart campaigns, policy development and debate”. In conclusion, they stated:

Support of trade unions and significant donors will always be important but we also need to look wider to new supporters interested in rebuilding a centre-left Labour movement … That is what Labour Tomorrow aims to do: to broaden the funding base of mainstream Labour causes. We hope that this new organisation, designed for modern times, fully transparent and compliant with all political funding rules will provide resources to projects … through a political prism. Our party is on a very long journey, but we have been on them before, and with groups like Labour Tomorrow we have the chance to get to a place much better than the one we are in now.

Blunkett and Dean said the company had “already raised funds which will be deployed to back projects in policy development, digital media, campaigning and building activist networks”. But they do not stipulate who those four areas will benefit. Considering the Labour Party already has those areas covered nationally, it seems reasonable to assume that the intention is to rival Corbyn.

Some off-the-cuff remarks by Blunkett in June would seem to cement these intentions. In what was a cruel prank by comedian Heydon Prowse, Blunkett was set up to think he was speaking to a Labour colleague outside parliament. The video, which The Canary has chosen not to publish, shows Prowse saying to Blunkett:

I’ve had a word with Mandy [Peter Mandelson] and we’re going to try and get the old firm back together again. Miliband, Blair…

We need to, we really do. We are in a terrible, terrible mess… I didn’t say this but we don’t just need a leader, but we need a project of our own… It can’t be worse than this… At the moment, we’re finished.

Blunkett was seemingly unaware that Prowse was setting him up, and the former Labour MP’s aide did nothing to correct the situation. But in an interview with The Mirror, the former MP stood by the comments he made, saying: “I said nothing that I have not said to anyone chatting to me”.

Could it be that Blunkett and other Blairites are hoping to form “a project of [their] own”, using Labour Tomorrow?

While the exact aims of Murphy’s company are unclear, one thing is for certain. Money may well buy policy development, digital media and campaigning. But it certainly won’t buy Corbyn’s mass of supporters.

The Canary contacted both Murphy, and Blunkett’s office. No one was available for comment.