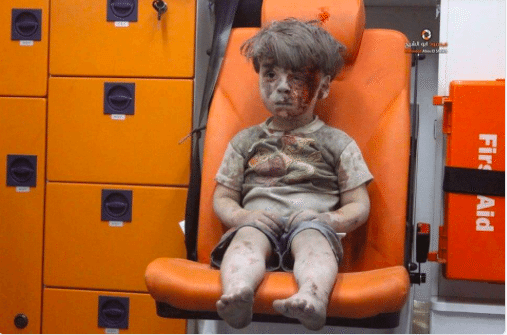 WARNING: This video contains disturbing scenes which may not be suitable for everyone and are not recommended for the faint-hearted. The purpose of sharing it is not to shock our readers or encourage violence, but simply to convey the fate of innocent civilians caught up in the Syrian conflict.

Haunting footage of a young boy in an ambulance has just gone viral around the world. The images allegedly show the aftermath of an airstrike in Aleppo, Syria. Released by the Aleppo Media Centre, the original video has currently been seen around 800,000 times.

Now referred to in most media outlets as ‘The Boy in the Ambulance’, the young boy had just been carried out of the rubble of his bombed house after a Russian-Syrian airstrike allegedly hit an Aleppo neighbourhood on 17 August. His ash-covered body was placed on the orange furniture of the vehicle, and he waited there a while as relief workers returned to the scene.

The cameraman captured the small child’s shock as he sat still and terrified, rubbing one hand over his head and face. The boy then glanced at his palm, before trying to rub the blood and ash onto the ambulance seat.

Civilians caught in the crossfire

The young boy was later taken to the M10 hospital, the same hospital that was bombed earlier in August. Three medical facilities were also bombed in rebel-held Aleppo in June 2016, along with four more in July.

An estimated 13 hospitals have been destroyed by the Syrian government since the conflict started in 2011.

Health facilities are of crucial necessity during armed conflicts, and even more so when we consider that most parties fighting in Syria seem to be playing free and easy with the laws of war. The image of the boy, Omar Daqneesh, sitting in an ambulance makes it ever more apparent that many of those suffering in this conflict are not willing participants – they are non-combatants, including children. Humanitarian sanctuary for them is non-existent, and the destruction of hospitals compounds the harm being caused.

To protect civilians, there must be an immediate resolution to the war in Syria

Aleppo is currently engulfed in a vicious conflict, and the rebel opposition there recently managed to break a crippling siege imposed by the Syrian regime. Prior to this siege, Syrian medical professionals pleaded with the international community to help them, after the systematic targeting of hospitals and the disappearance of the last streams of food. Considering the United States to be an international superpower with the ability to act, they wrote in an open letter to President Barack Obama:

Continued US inaction to protect the civilians of Syria means that our plight is being wilfully tolerated by those in the international corridors of power. The burden of responsibility for the crimes of the Syrian government and its Russian ally must therefore be shared by those, including the United States, who allow them to continue.

They end the letter with the words:

We do not need tears or sympathy or even prayers, we need your action.

The international community, including the US, has a ‘responsibility to protect‘. This means it must intervene in conflicts in the way which most effectively ensures the protection of civilian life. This can mean either diplomatic or military action – but civilian protection must always be paramount. So far, we have not seen that responsibility exercised, as regional and international states seem more committed to playing political power games than saving civilian lives.

Now, without saying a word, one young boy sitting in an ambulance in Aleppo has just made the calls for a resolution to the Syrian conflict even stronger.

WARNING: Readers may find the video below disturbing.

– Read more of The Canary‘s international reporting on Syria at The Canary Global.

– Write to your MP to pressure the government to step up its efforts to find a resolution to the conflict in Syria.

– Contribute to humanitarian relief in Syria by supporting charities like:

– Learn more about human rights abuses in Syria through the website of the Independent International Commission of Inquiry of the Syrian Arab Republic.