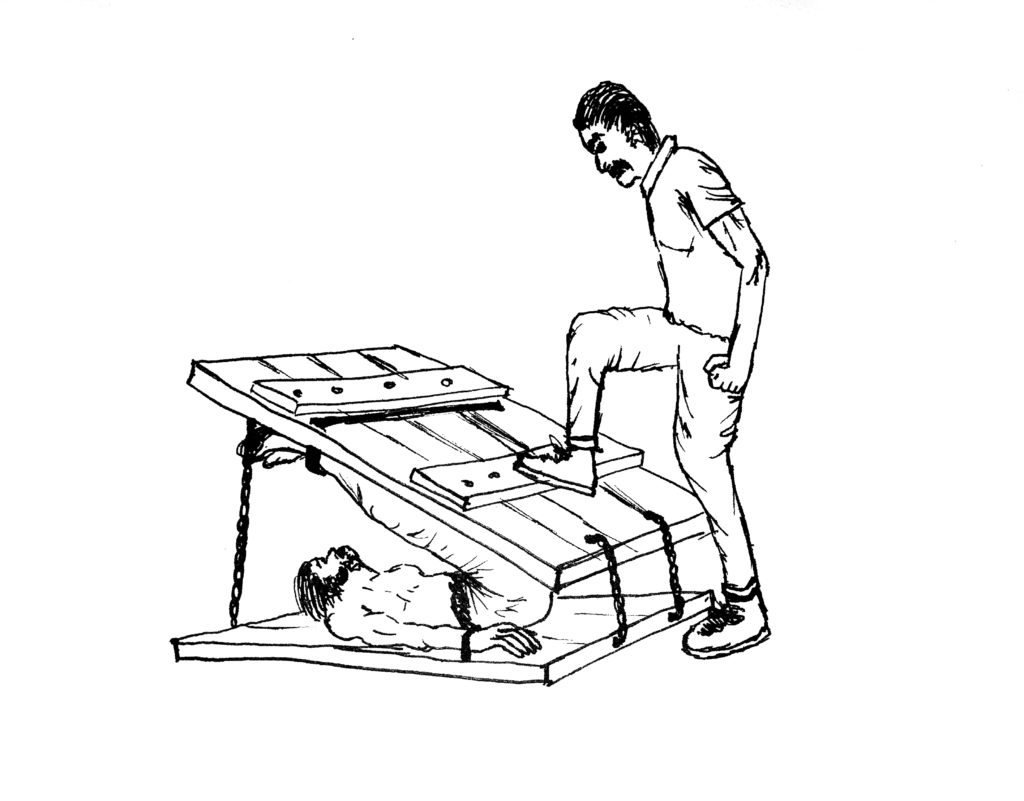 According to a new Amnesty International (AI) report, 17,723 people have died while in the custody of the Syrian regime since the beginning of the country’s conflict in March 2011. Many more have suffered torture.

With such disregard for human rights apparently also shared by the regime’s opponents, activists have been left asking: Where exactly is the international community?

The multiple stages of torture

Torture was something common among Syria’s intelligence services even before March 2011. But the conflict raging today has transformed a dire situation into something even more catastrophic. Now, torture is being committed systematically on a mass scale, and is directed at anyone opposing the regime – no matter what political group they’re from.

In the Amnesty report released on 18 August, the organisation interviewed 65 survivors of torture. The majority said they were abused as soon as they were arrested, and again while being transferred. Then, upon reaching the detention facility, they were ‘welcomed’ with a barrage of beatings using a silicone or metal instrument, and sometimes even electric cables.

Samar, a lawyer arrested near the city of Hama, recounted:

They treated us like animals. They wanted people to be as inhuman as possible… I saw the blood, it was like a river… I never imagined humanity would reach such a low level… they would have had no problem killing us right there and then

These so-called “welcome parties” were followed by “security checks”, which usually involved women being raped and sexually assaulted by male guards.

Interrogations often included dulab (forcibly contorting the victim’s body into a rubber tyre) and falaqa (flogging on the soles of the feet). Detainees were also raped, given electric shocks, held in stress positions, and scalded or burned with cigarettes. They also had their fingernails and toenails pulled out.

The intelligence branches, where prisoners were initially held, had poor conditions that amounted to cruel, inhuman, and degrading treatment. This is prohibited by international law.

Testimonies included reports of a lack of food and medical care, along with poor sanitation which allowed scabies, lice, and disease to thrive. There was also severe overcrowding. All of this increased the death rate in detention.

On one occasion, seven people died of suffocation when the ventilation stopped working, forcing the prisoners to sleep next to dead bodies. One former detainee named Jalal said:

It was like being in a room of dead people. They were trying to finish us there…

Without visits from lawyers or family members, this treatment amounted to enforced disappearance.

After spending time in the intelligence agencies, the prisoners were tried in what AI describes as “outrageously unfair trials before military courts”, which lasted just minutes. They were then transferred to Saydnaya Military Prison, where the ill-treatment had the sole purpose to degrade, punish, and humiliate the detainees.

In [the intelligence branch] the torture and beating were to make us ‘confess’. In Saydnaya it felt like the purpose was death, some form of natural selection, to get rid of the weak as soon as they arrive…

He described one incident when guards beat an imprisoned Kung Fu trainer to death after they found out he had been training others in his cell:

They beat the trainer and five others to death straight away, and then continued on the other 14. They all died within a week. We saw the blood coming out of the cell.

On another occasion, a guard forced two men to strip naked and ordered one to rape the other, threatening that if he did not do it he would die.

Where is the international community?

Luther has called on the international community to do much more, saying:

The international community, in particular Russia and the USA, which are co-chairing peace talks on Syria, must bring these abuses to the top of the agenda in their discussions with both the authorities and armed groups and press them to end the use of torture and other ill-treatment.

In particular, he notes Russia’s role in shielding its allies, the Syrian government and the individuals within it, from being brought to account before the International Criminal Court.

Amnesty has called for the remaining prisoners to be freed, or at least granted the opportunity for fair trials.

Those who’ve survived and been released have been left both physically and psychologically scarred, and they need to be afforded rehabilitation. The international community can offer its support in this area, too.

In the face of such gross suffering and grave abuses, where are the voices of the British government and other governments around the world?

See below for AI’s video documenting what life is like inside Saydnaya Prison:

– Read more of The Canary’s reporting on the Syria conflict at The Canary Global.

– Write to your MP and ask them to pressure the UK government to condemn the torture and other human rights abuses suffered by Syrian detainees.