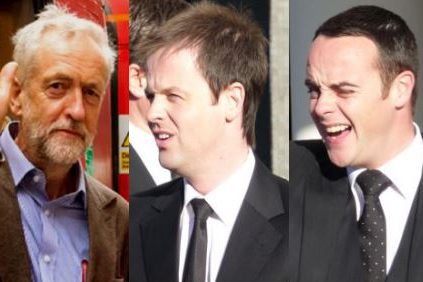 Sometimes I have a virtual out-of-body experience surveying mainstream headlines. I honestly have difficulty accepting that others don’t see them as the ridiculous pantomime I do.

In my short time with The Canary, I’ve already written more than a couple of pieces pointing out the asinine bias with which Jeremy Corbyn is continually slandered. It’s not that I want to keep on banging out stories essentially making the same argument, or that I don’t have plenty of other things I’d like to talk about. But every time I think we’ve seen the most deplorable, the most ridiculous, and the most irrelevant, something inevitably comes along to lower the bar even further. And using the names of beloved TV presenters Ant and Dec as a political weapon must be just about the silliest ruse ever.

Surely, even the people who actively dislike and don’t support Corbyn must, in their heart of hearts, see something wrong with this by now?

Take a step back. Look at this. Post-Brexit Britain is a nation treading water, waiting for a tide to come in that may or may not drown us. Nobody really has any clue what the Tories are up to. The only thing I got from a recent episode of Newsnight is that Theresa May is apparently the modern-day reincarnation of Joseph Chamberlain. Brilliant. Considering one of the most popular UK Google searches on 24 June was ‘what is the EU?’, I’m sure that titbit of historical irrelevancy is going to be incredibly useful.

Let’s focus on what matters

We have war and conflict, austerity, and nuclear missiles. We also have political coups, terror attacks, and comic book villains in positions of power. A virtual treasure trove of issues that the populace should be talking about and considering. But no.

Instead, the broadsheets are slamming a political leader for the fact that he didn’t recognise a couple of reality TV show presenters.

For God’s sake, people?! It’s like consulting a solicitor for legal advice, but all they want to talk about is this month’s OK! magazine. Worse still, according to certain articles – such as those offered by The New Statesman and SKY News, it’s wrong for those of us not distracted by populist drivel to expect serious news and politics.

I could not disagree more. We must aspire to better, and not lower standards to suit a pretty meagre common denominator.

But surely everybody knows who Ant and Dec are?

Yes, I personally know who they are. I agree that many people living in this country would. But I’m not going to judge a politician for not knowing any more than I’d judge the surgeon offering me a potentially life-saving tumour removal for his poor familiarity with Star Wars terminology and ways of The Force. In fact, I’d be pretty bloody relieved that he/she wasn’t a complete dork like me. I’d be positively glad that they’d spent years of their life avoiding the daft, meaningless stuff I’ve wasted my time on, and instead chosen to wear only tweed and stay up into the early hours reading up on intricacies of excisional biopsies.

Bloody marvellous. That is quite literally exactly what I want to hear.

To imply that a doctor’s lack of Star Wars related trivia means he/she doesn’t in fact have my best interests at heart, or know what’s best for me regarding this surgical procedure, is just complete idiocy.

Even so, the detail is spun by rags such as The Mirror with catchphrases like “ignorant” and “snobbery”. The Sun goes further, lashing out with opening gambits of “clueless” and “hapless”. The Telegraph, a marginally classier peddler of right-wing spin, dropped the watch-words “failure”, “stumbling”, “apology” and “remorse”.

It appears they’re getting more desperate by the day, if this is really what one article describes as:

The most chilling moment of his career to date.

I for one am now finding the whole thing quite laughable. But what disturbs me is the thought that somebody out there genuinely thinks of this as political ammunition, or that it’s the stuff we should be focusing on. It’s just meaningless distraction.

Come on folks… it’s not like he f**ked a dead pig.