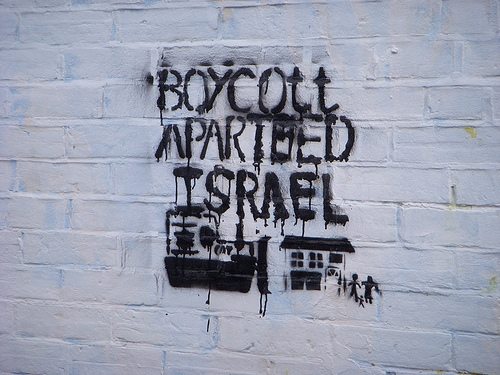 A new briefing by a policy thinktank has shown how sales for the biggest Israeli defence company have suffered because of growing support for Palestine, proving that the Boycott, Divestment and Sanctions (BDS) campaign against Israel’s illegal occupation is working.

Al Shabaka, an ‘independent and non-partisan non-profit organisation’, has written a new briefing called The “S” in BDS: Lessons of the Elbit Systems Campaign. In it, the authors describe how sales for one of the biggest Israeli defence companies may have decreased by 40% in three years.

But in reality, it’s Israel itself that has been sounding alarm bells, saying it is facing a decline in international business due to an overall trend of ‘smaller budgets, more competition, and less desire for Israeli-made products’.

In light of sustained abuses of Palestinian human rights, there has been a call for a complete military embargo against Israel.

The fruits of this labour are now becoming apparent, as the following actions have taken place:

The decrease in profits for Israel’s military industrial complex shows this is more than symbolic, despite a 1% increase in global military spending altogether.

Several case studies illustrate how civil society campaigning has caused losses for Elbit Systems, including in France – where the BDS movement has actually faced legal opposition by the French state. The UK and Brazil have also reversed decisions and ruled in favour of other companies to implement their drone technology, all too aware of the bad PR that comes from working with a company like Elbit. The Al Shabaka briefing suggests:

The erosion of the ‘Made in Israel’ brand even in the defense and security sectors is fertile ground in which human rights advocates can effect change.

The myth that Israeli defence systems are superior

‘Made in Israel’ is not only a stamp for bad publicity. It is also no longer a badge for the best in defence systems – something that used to be accepted in the industry. And this is another strategic foothold the BDS movement can take:

Israel’s capacity to wage wars, maintain its military industrial complex, and compete in the global market depends on its reputation as a country with cutting edge and “battle proven” weaponry.

The public has apparently wisened up to labels such as “field tested”, which they understand to be weapons used in atrocities against Palestinians.

The briefing points out a few more facts that question the supposed superiority of Israeli arms.

In 2006, during the Israel war against Hezbollah, the latter disabled around 20 Merkava tanks that Israel had claimed were indestructible. Israel themselves started buying Abrams tanks instead, which were made in the US. And even the ‘Iron Dome‘ (Israel’s missile defence system) and its alleged effectiveness, says the Al Shabaka briefing, have been called the “world’s biggest hoax”. It’s also important to note that the watchkeeper, a well sought after drone developed by Israel, has been involved in numerous crashes, making the problems with Israeli technology not just a question of superiority, but also one of safety.

Furthermore, Israel’s export of cyber-security is under fire, as its propensity towards spying on those they offer technologies to has granted it the gift of mistrust among states that might make “policy choices that are not in the interest of Israel and the US”.

Still much work to be done

While love for Israeli systems is waning in some countries, it isn’t lost in others. Al Shabaka authors warn of a number of opportunities for Elbit Systems coming up that activists should be aware of. These include:

The report cites several other factors that have affected the decline of Elbit Systems and the Israeli military industrial complex in general. All of these, it says, are important to understand for activists, so that they can bring about change.

Above all, if Palestinian activists and BDS campaigners wish to remain successful, they must be aware that things can change very quickly, and be aware of where those changes might happen.

– Find out how you can support the Boycott, Divestments and Sanctions (BDS) campaign.

– Read our other articles on BDS.

– Write to your MP if you are concerned about UK partnership with Israeli defence systems.

Featured Image via Flickr/Wall in Palestine