The world's 'largest ever' strike takes place, but gets buried by the media [VIDEO] - Canary 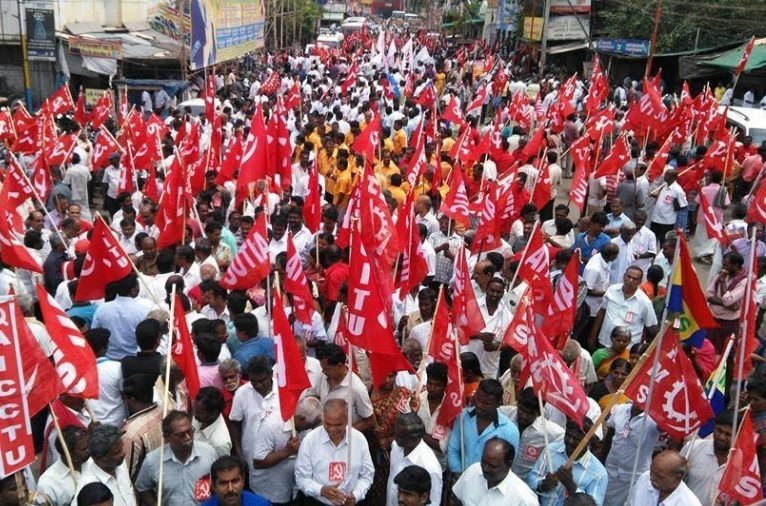 On Friday 2 September, one of the world’s biggest economies witnessed what might have been the biggest strike in history. In a powerful act of resistance to India’s right-wing government, up to 180 million people are thought to have been involved. But thanks to the understated coverage in the British (and global) mainstream media, you might have missed it.

Ten trade unions, and up to 180 million public sector workers – including bank employees, miners, teachers, construction workers, and postal workers – were involved in the strike.

this strike is the world’s largest ever.

And indeed, there was a big impact. Assocham, the highest body of the Chambers of Commerce of India, insisted that the disruption caused to supply chains and businesses cost the Indian economy 180bn rupees (£2bn).

This was the fourth all-India strike since 2009.

Why did the strike take place?

Unions were responding to what they called the “anti-worker and anti-people” policies of Prime Minister Narendra Modi. According to Indian National Trade Union Congress Vice President Ashok Singh:

Modi led the right-wing Bharatiya Janata Party to a landslide victory in the May 2014 general elections, promising to boost India’s economy. To do this, he has sought to increase foreign investment and privatise state-run industries. He has already sold shares in state-owned industries worth billions of pounds, and aims to raise around $8.3bn through further privatisation between 2016 and 2017.

Unions fear that Modi’s neoliberal policies (cuts, privatisation etc.) will reduce both employment levels and wages. For that reason, they launched their massive strike with 12 demands, including a call to raise India’s minimum wage, increase universal social security, and ban foreign investment in the railway, insurance, and defence industries.

A long time in the making

But neoliberalism in India is nothing new, and it predates Modi’s regime by a long time.

According to Jawaharlal Nehru University economics professor Jayati Ghosh, Modi has simply built on a 25-year neoliberal agenda which has left Indian workers worse off. She says:

Less than 4% of workers in India come under labour protection, and even those protections have become more and more eroded. There’s a general sense that instead of targeting poverty they are targeting the poor, and there has been a real running down of spending on essential public services.

Some health workers in India haven’t been paid in months. Food subsidy and distribution schemes, meanwhile, have been neglected. And Ghosh insists that:

private employers who wish to discourage any kind of unionisation are being actively encouraged by the central government.

In this environment of longstanding establishment attacks on workers’ rights, it seems that India’s unions may have had no choice but to strike. And in doing so in such a dramatic way on 2 September, they sent a strong message both to Modi’s government in New Delhi and to the world: workers won’t give up their rights without a fight.

You can see some footage from the strike in the video below:

– Read The Canary’s other articles on India and see more international reporting from us at The Canary Global.