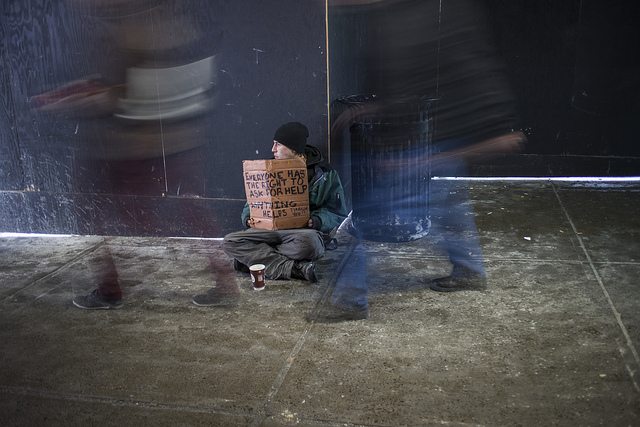 A radical new project is tackling homelessness on the streets of Barcelona. Set up by an entrepreneur and crowdfunded by the public, it’s already seeing results. It has one big goal: to eradicate homelessness in Spain’s second largest city altogether. And the project might just work in the UK, too.

‘Homeless Entrepreneur’ was started by Andrew Funk, a 35-year-old American living in Spain. Funk had been teaching English, translating, and consulting for businesses for the past 14 years. And it’s this background which led to the launch of Homeless Entrepreneur. Funk calls it a “startup incubator for homeless people who want to build a new business and a new life”. And speaking exclusively to The Canary, he says that the inspiration behind the idea came from the people he met on the streets of Barcelona:

I was inspired by all of the nameless people I passed by who held their stories behind glazed eyes waiting for something to change, or silently suffering the fact that everything just stays the same. I asked myself what I’d do if I was in their situation, so I let my hair and beard grow and I spent 24 hours in the streets of Barcelona; 12 hours begging for change and 12 hours asking for advice on how to get off the street.

Funk has always believed that everyone has a talent and that visibility creates opportunities for those willing “to fight for what they truly believe in”. And it is people’s talents that Homeless Entrepreneur taps into.

It’s a fairly simple idea. Crowdfunding supports a homeless person to find somewhere to live, and then pays for training, professional assistance and start-up costs to set up a business of their choice, depending on their “talent”.

Then, once the person is a homeless entrepreneur, they then select two other candidates to go through the process, and they mentor them, following the same path they have. Ultimately, Funk hopes that all of the 1,000 street sleepers in Barcelona will be in the project.

While Spain’s second largest city has 1,000 street sleepers, the British equivalent – Birmingham – has 36, according to official figures. In reality, the figure may be much higher, but it goes to show the scale of Barcelona’s problem.

Part of a family

The project came off the back of Funk’s research:

I spoke with all of the homeless people I could and started getting a feel for what homeless people had to say for themselves. Then, I spent 24 hours in the street and started raising awareness within the community. I held a solidarity lunch and started a crowdfunding campaign as soon as I found the first person who was interested in telling his story and getting off the street.

That first person was Marcos Hernández Garrido, who Funk says is like part of his family, now. Hernández became homeless after his relationship with his partner ended, and his life spiralled out of control from there. He spent seven years on the streets, until Homeless Entrepreneur identified him. He’s a poet, now working towards publishing his own book, and has selected the second homeless entrepreneur, who is beginning the process. Hernández didn’t choose to be homeless, though, and as Funk says:

Personally, I believe that people end up homeless after a long life of countless visible and invisible tragedies. It’s an accumulation of weight, that slowly eats away at their personal and professional network, until no one is left willing to help them. Part of the problems are external and part are internal. It would be wrong to blame either society or the people who end up homeless completely. Everyone plays a role in homelessness and nothing will change until all parties realise that they must play their part in making the world a better place.

Playing their part in the project are 13 people behind the scenes, from psychologists to digital marketers. Funk says the team has also grown organically, through word of mouth and hard work. And while some of the public have been hostile to the project, Funk says others have jumped to help them, without question. “The important part is creating a conversation and allowing people to help with what they can and how they want to,” Funk says. “I don’t think economic wealth defines the wealth of one’s heart.”

But Funk is not a big fan of charity. While he thinks everyone has a right to give their money to what and who they wish, he prefers the motivational and practical assistance that Homeless Entrepreneur offers. He told The Canary:

Our goal is to inspire and help lead them towards a more independent lifestyle than they have, thanks to their talent and effort along with the help of others in society.

Two of the most difficult aspects to deal with in order to get off the streets are becoming responsible and changing one’s routine. If someone wants to donate their time to help another person become more responsible and help them change their routine, they have all of my support.

Funk says his ultimate goal is, of course, to end homelessness around the world. But he’d be happy with ending it in Barcelona to begin with. “The truth is I want to spark the mind of others,” he says, “who can help speed up the process of eliminating homelessness.” Funk also hopes to move the project to the UK within a year, as he thinks there are people doing “some amazing work to end homelessness” here.

“If you see a problem, it’s because you’re not focused on the solution” is a favourite saying of Funk’s. And it’s one which rings pertinently true with this project.

In its infancy, the fact that Homeless Entrepreneur has already helped Hernández is an achievement in itself. But Funk is determined to continue this throughout Barcelona, and hopefully beyond. And he says a factor that inspires him on a daily basis “is the chills I get as the project grows and our community becomes stronger”. This, he hopes, will ultimately bring Barcelona closer to ending homelessness rather than maintaining it.

“If society cares, homelessness will cease to exist,” Funk says. And those words will surely ring true with every one of the people Homeless Entrepreneur aims to support.

– Find out more about Homeless Entrepreneur and watch the introductory film.