South America could soon have its first physically disabled president, and he's on the left - Canary 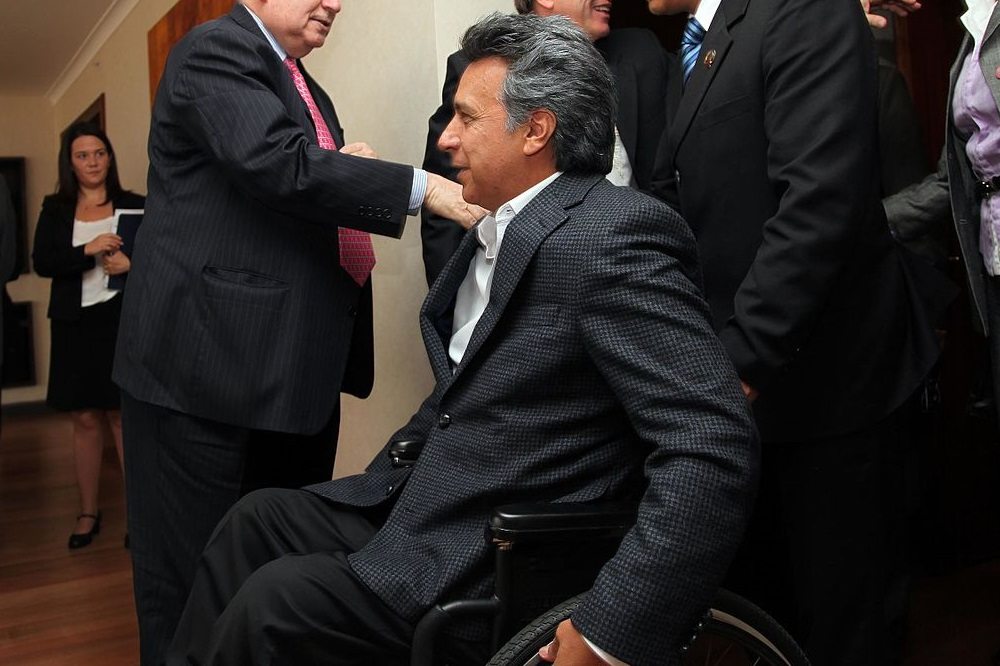 Ecuador is one of the smallest countries in South America. But it may soon make history by electing the continent’s first physically disabled president.

Who is Lenín Moreno?

Elections are due to take place on 19 February 2017. And Ecuador’s ruling centre-left coalition has chosen former Vice President Lenín Moreno as its candidate for the race. If he wins, he will become the first Latin American president in history to have a physical disability.

Moreno was Vice President from 2007 to 2013. He has since served as Special Envoy on Disability and Accessibility at the UN. The centre-left Alianza País (AP) elected him as its official presidential candidate on 1 October.

The AP candidate has used a wheelchair since being shot during a robbery in 1998. He has since been an advocate for the rights of people with disabilities. Upon leaving his role at the UN, he said:

I will continue working and fighting for the… visualization of people with disabilities in every corner of the Earth.

The AP’s record in power

In recent years, Ecuador has perhaps been in the news mostly as a result of giving political asylum to WikiLeaks founder Julian Assange. But the country has actually been leading the way in Latin America in a number of ways.

Since President Rafael Correa became Ecuador’s leader in 2006, the government has: reduced poverty by over a third; cut child malnutrition and child labour in half; invested more in education than any other country in South America; and moved over 300,000 children off the streets and into school. According to a World Bank study called Taking on Inequality, Ecuador has been the second best country in Latin America for reducing the gap between rich and poor citizens in recent years.

While there have been partial moves to respect and protect the environment in Ecuador in recent years, the North American Congress on Latin America (NACLA) insists that “Correa has not been at the forefront of these movements”. Instead, such moves have been the result of grassroots pressure.

In fact, Correa’s government has faced a number of protests over controversial mining policies and its perceived top-down approach. It has also been criticised for seeking a free trade deal with the EU.

But after decades of instability, weak governments, and US interference in Ecuador, Correa has successfully managed to stay in power for ten years, despite attempts to overthrow him. In 2010, for example, he resisted a coup attempt in which the right-wing media played an important role (at a time when Correa had an approval rating of over 80%).

Recent difficulties, and a broad appeal

Today, right-wing forces are very much on the rise in South America, and Correa’s government has fewer regional allies. On top of this, Ecuador faces serious economic difficulties in the run-up to February’s presidential elections, largely as a result of low oil prices, a strong dollar, and April’s devastating earthquake. Correa has called this a “perfect storm” which needs to be dealt with carefully.

The AP’s response to this crisis will play a key role in the upcoming election. An economist by trade, Correa has already cut his government’s budget by $6bn and announced the privatisation and closure of some public entities – in an apparent attempt to preempt opposition calls for austerity. And while he claims “the poor and working class won the most” during his time in power, he’s been careful to insist that “the business class has also won”.

While the independence of Correa’s government may have worried US elites and their Ecuadorian counterparts in the last ten years, its current appeals to the centre ground may well help to win the AP another term in power. But Correa also says the AP will continue to propose a clear alternative to neoliberal economics, insisting:

social protection does not contradict the market, it compliments it.

Indeed, the reduction of poverty and unemployment, along with the funnelling of increased tax revenues into social projects, may well be enough to keep Ecuadorian voters on side in 2017. And this legacy could help to propel Lenín Moreno into power, making history in the process.

– See more of our international articles at The Canary Global.