Donald Trump tries to speak Hindi in a desperate plea to Indian-American voters, and it backfires royally [VIDEO] - The Canary 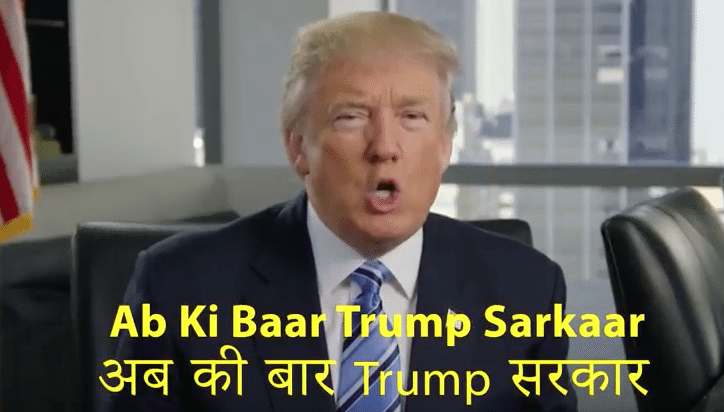 The presidential campaign of Republican candidate Donald Trump is not known for its multicultural appeal, and today’s effort by the trust fund tycoon to ‘reach out’ to the Indian-American community with a message in Hindi is unlikely to go far in fixing that.

During his campaign, Donald Trump has proposed a ban on Muslims entering the United States; praised a (false) anecdote of a US general who shot Muslims dead with bullets dipped in pigs blood; labelled Mexican immigrants as drug dealers and rapists; attacked Black Lives Matters activists repeatedly as domestic extremists; and encouraged supporters at his rallies to physically attack non-white protesters. This list is far from exhaustive.

But as the most depressing and hateful presidential campaign in US history comes to its withering end, Donald Trump has issued a ‘Happy Diwali’ message to Hindu voters, in an attempt to leverage any lingering anti-Muslim hostility in that community into votes for his campaign. The ad even uses footage of a 2008 terrorist attack on India to underscore the point, in case we missed the subtext.

Just as Trump has attempted to court African-American and other minority community votes in the dying weeks of the campaign, he pulled out his favourite phrase once more, without irony: “we love the Hindus!” Trump also loves ‘the blacks’, women, ‘the gays’, the ‘whoever is willing to put a cross in the box next to his name’.

But for anyone naive enough to consider Trump a suitable candidate for President of the United States, it’s worth remembering that love is a verb, not a noun. He can’t whitewash the way he’s spoken about women, LGBT people, and ethnic minorities throughout his campaign with just a cursory proclamation of love. Love does not look like this.

As social media users were quick to point out:

I have lived in India and have a respect for the people. I have to say they are not that stupid. https://t.co/xhNroMd3SL

There's not much time to make more things awful before the election, but T-rump managed to fit in wrecking Diwali https://t.co/ICSl2Ea0wN

At this stage, it’s looking highly unlikely that Donald Trump will be America’s next president. But the harm his campaign has caused can be seen across the country and on social media. Former Illinois Congressman Joe Walsh posted this on Twitter, summing up the potential for genuine crisis in the wake of a Clinton victory:

On November 9th, if Trump loses, I'm grabbing my musket.

While many Republicans are reluctant to put out the vote for their candidate, it seems only horror at the opponent is motivating many of those opting to vote for Democratic opponent Hillary Clinton.

This is an election which the world will remember for all the wrong reasons.