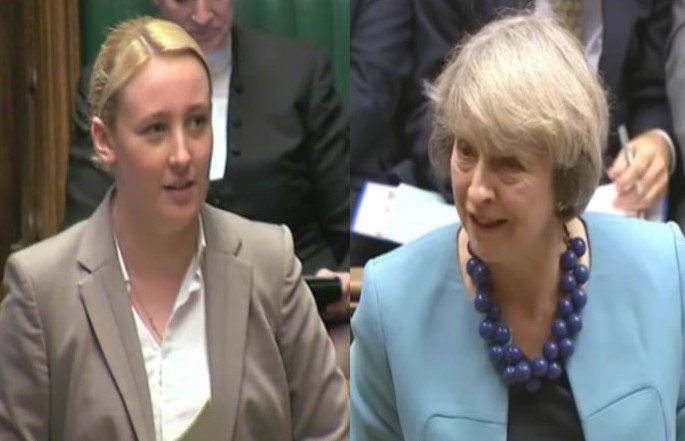 The UK’s youngest MP has savaged Theresa May’s government over its chaotic handling of tax credits. Mhairi Black, the SNP MP for Paisley and Renfrewshire South, slammed the government’s behaviour as “absolutely disgusting” after a private company stopped thousands of people’s tax credit payments, plunging them into poverty.

A licence to harass

HM Revenue & Customs (HMRC) gave a £75m contract to US firm Concentrix to help cut tax credit fraud and overpayments. But MPs said the company was incompetent after countless people had their tax credits wrongly stopped. Many of them received “fishing” letters, wanting them to confirm details such as marital status or the number of hours worked.

The government gave Concentrix a “licence to harass“, according to Labour MP Peter Dowd, and the company made countless false accusations of fraud. It stopped people’s tax credits, sometimes based on false information. And often, its “victims” had no warning. Concentrix has been accused of unnecessarily plunging thousands of people into poverty. The government has said Concentrix would not have its contract renewed in 2017.

On Wednesday 26 October, Black spoke about the fiasco in a debate in parliament:

All of my constituents I dealt with didn’t discover their tax credits had stopped until they went to collect them from the bank and discovered they had nothing.

Pointing out that people’s “survival” was at risk, Black told the story of Marie – a mother of two. Marie went to the bank, only to find her tax credits had been stopped. She had to survive for six weeks without any support, and “genuinely could not fill the cupboards with any food”. Black said that Marie spoke of the shame of having to take her children to a food bank to be able to eat.

Marie’s story is worryingly familiar. MoneySavingExpert reported on Olivia’s story. The 22-year-old single mum from Liverpool had her tax credits payments suspended without warning when her son was just two weeks old. She was then accused of living with an undeclared partner, but she received no letter about it; Concentrix simply stopped her tax credits. Olivia then had to survive on £44 a week, to feed her newborn baby and a toddler, for seven weeks.

When people wanted to query Concentrix actions, they had to apply for a ‘mandatory reconsideration’. But Concentrix did the reconsiderations, as Black pointed out. And in 95% of cases, the company was in the wrong. As Black said:

this company was openly admitting they only got it right 5% of the time.

Black then turned it back on the Conservative government:

We need to remember that HMRC and the government were supplying information to Concentrix, so a lot of the fault lies with the government. This entire contract has been an absolute shambles and ludicrous from the start… It is actually completely disgusting for this to be happening under the watch of government…  When the mistakes are made by government, it is people who suffer. And often it is the most vulnerable people.

MPs have received “an 11% pay rise”, said Black. “Who in the outside world has seen that kind of pay rise?”

– Sign the petition to reinstate people’s tax credits where Concentrix has stopped them.

– Read more articles by The Canary on the Conservative government.