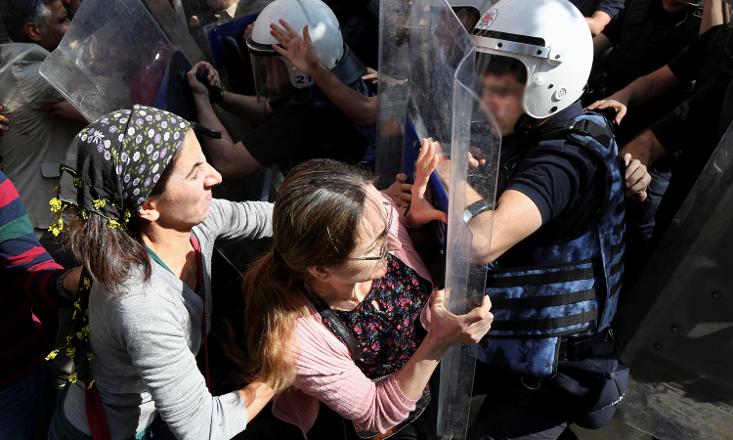 Turkey’s post-coup purge was never just about crushing the alleged coup plotters. It was about neutralising all opposition; particularly that of pro-Kurdish political parties and their supporters. And in recent weeks, the continuing purge has exposed even further the authoritarian undercurrent in Turkish politics, and in President Recep Tayyip Erdoğan’s AKP government.

Signs of authoritarianism include:

The Erdoğan government has done all of that.

In the latest stage of its crackdown, the AKP regime has imprisoned Kurdish mayors and arrested the editor of a leading newspaper. This has led one senior figure from a major political party to call for widespread resistance.

An overview of the crackdown

The Turkish government has arrested and jailed thousands of political opponents so far. More than two dozen mayors from the Democratic Regions Party (DBP) were arrested in August. This party is in favour of Kurdish cultural and political rights within Turkey. In the past year, authorities have arrested and imprisoned almost 2,500 DBP officials and members.

At least 133 journalists are currently in jail. And there have been dismissals of members of the judiciary and academics, too. The website TurkeyPurge lists many examples of others who the government has sacked or jailed.

On 25 October, two co-mayors of a mostly Kurdish city in southern Turkey were arrested: Gültan Kışanak and Fırat Anlı – both members of the DBP. The following day, Turkish police used tear gas and water cannon to attack people protesting their arrest in the city of Diyarbakır.

Turkish authorities soon continued this crackdown by forcing the pro-Kurdish JINHA Women’s News Agency to close down. Then, on 31 October, police arrested the editor and at least 12 senior staff of Cumhuriyet – a mainstream liberal newspaper which is one of the oldest in Turkey.

The Turkish state wants to escalate its attacks and impose this colonialism… everywhere… where Kurds live… Non-stop resistance has begun. We will be on the streets every day, every hour. We will not go home after making a statement, but remain on the streets until the politicide operations end. As the HDP group, we will be a part of this resistance.

Ravina Shamdasani, spokesperson for the UN High Commissioner for Human Rights, has reportedly said the commission is concerned about the arrests of the DBP co-mayors.

A call for solidarity

The KJA (Kongreya Jinen Azad), an umbrella organisation for Kurdish women’s groups, sent the following statement of solidarity to The Canary:

Turkey’s attacks on the Kurdish people and their representatives is part of the ongoing state repression that has taken place in Kurdistan since July 2015. This repression has escalated over the last few days with the detention on 25 October 2016 of Gültan Kışanak [and Fırat Anlı]… after the municipality building had been blockaded and raided by hundreds of police.

Many of our women comrades have been detained in protests too, including Ayla Akat Ata, co-speaker of KJA, who was beaten by police and has had all visits by her lawyer and family refused.

On 26 October 2016, those people who gathered in front of the municipality building to protest these arrests were attacked with water cannons and teargas and many were battered and detained. During this attack, women were specifically targeted. The day after Ayla Akat Ata’s arrest, her house and the offices of the KJA… were raided by the police and all documents, archives and computers confiscated.

These attacks are a continuation of genocidal policies by Turkey against the Kurdish people. During the conflict, over the last 15 months, approximately 100 women have been killed, with thousands of women detained and hundreds arrested.

We, the women who are living in this “State of Emergency” in every “state”[*], know that the only way to end this repression is through resistance. We call upon all women comrades to show their support.

[*] A reference to the fact that Kurdish communities are split between different states – mostly Turkey, Syria, Iraq, and Iran.

– Read The Canary‘s previous articles on Turkey, Kurdistan (and Rojava). See more international reporting from us at The Canary Global.

– The KJA is keen to receive support – humanitarian and financial – to protect Kurdish rights. To find out more about how to help, contact [email protected] and [email protected]; Twitter: @2015KJABASIN; Facebook: KongreyaJinen Azad.