This woman is leading efforts to send ISIS to hell, but Turkey has other plans - Canary 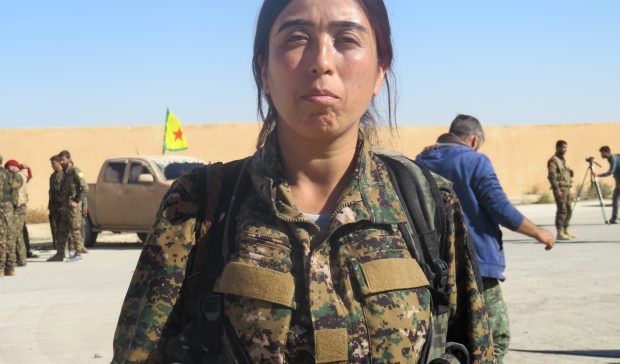 The main assault on the Daesh (Isis/Isil) capital of Raqqa is now underway. And women are at the forefront of the battle.

Using the code-name “Wrath of the Euphrates”, the group leading the offensive is the SDF (Syrian Democratic Forces). And Commander Rojda Felat (the woman pictured above) is one of those leading the charge.

Daesh fighters believe that if they die at the hands of a woman, they won’t go to heaven. So with Felat and other women on the frontlines in the battle for Raqqa, they’d better prepare for hell.

In June, Felat made it clear what her intentions as head of the SDF operation were:

Wherever there is an attack against humanity we, as the Syrian Democratic Forces, will be there. Wherever there is a suppressed woman, that is a battleground for us… People are joining the SDF and YPJ [Women’s Defence Units] by the droves. Not only for the [Yazidi] women of Shengal (Sinjar), but wherever a woman is being suppressed, wherever a man is threatening a woman, our forces will struggle against this. Our struggle for the liberation of our people will become a beacon for all resisting peoples.

The SDF is led by the gender-egalitarian, secular and largely-Kurdish YPG [People’s Protection Units] and YPJ, which are the defence militias of the multicultural and directly democratic cantons of Rojava in northern Syria. Kurds currently make up around 70% of the SDF forces in the Raqqa assault, but Arabs could make up to 40% when other anti-Daesh groups join the battle.

Turkey insists that the attack on Raqqa should exclude all Kurdish forces. It wants only the Arab and Turkmen sections of the SDF to take Raqqa. But the US has reportedly made it clear that the Kurds will remain a part of the main ground force in the offensive.

In Turkey, there is an the ongoing purge of the press, academics, the judiciary, and political opponents. After the recent arrests of opposition politicians from the left-wing Peoples’ Democratic Party (HDP), there were a number of criticisms from Europe. In a televised speech on 6 November, Turkish President Recep Tayyip Erdoğan said he didn’t care whether Europe regarded him as a dictator or not.

Turkey at war with anti-Daesh forces in Syria

The campaign to liberate Raqqa began in May 2016, when the SDF liberated towns and villages north of the city. But in August, Turkey launched an invasion of towns in north-western Syria which the SDF had also liberated. The assault had been many months in the making.

Turkish tanks rolled into Syria on 24 August, diverting the SDF away from fighting Daesh. And it did not take long before there were allegations from locals, in a town near the liberated city of Manbij, that the Turkish army had carried out chemical weapon attacks.

In September, Turkey launched multiple attacks on towns and villages in Syria liberated by the SDF. Its ultimate aim was to stop the SDF from connecting two of its cantons through the city of al-Bab in northern Syria. Then, in October, it continued to widen its offensive against the Kurdish-led forces, targeting the YPG headquarters near Tel Abyad.

Once the SDF and its allies succeed in liberating Raqqa from Daesh, Turkey will no doubt attempt to ensure the Kurdish-led forces are sidelined. And the US will want to appease its NATO allies in Turkey. But the more Americans and others in the West see how effective the SDF is, and how repressive the Turkish state is, there will be increasing pressure on Western governments to reconsider their alliances in the Middle East. Especially if they truly want to defeat Daesh.

– Read The Canary‘s previous articles on Turkey, Kurdistan (and Rojava).