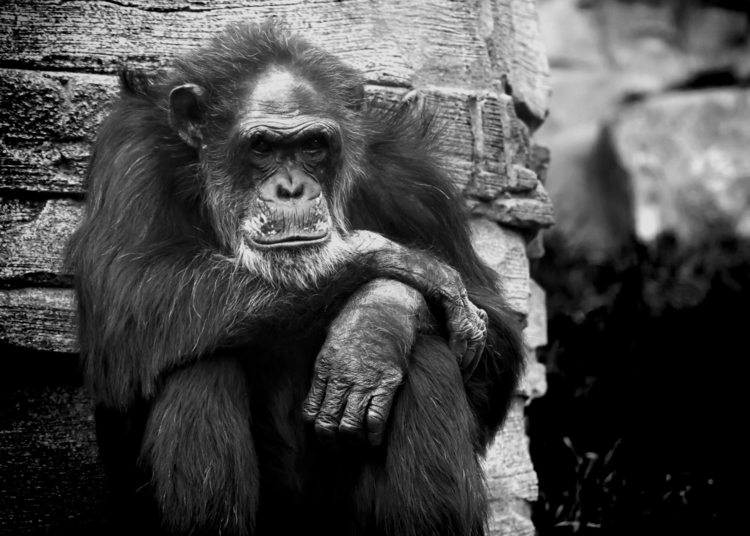 An Argentinian judge has ruled that a chimpanzee called Cecilia has legal rights, and should be released from Mendoza Zoo. But the justification for this ruling could also extend to other animals in captivity.

The Association of Professional Lawyers for Animal Rights (AFADA) filed the case, arguing that Cecilia’s confinement without companionship was ‘unlawful’ and damaging to her health.

We’re not talking about civil rights enshrined in the Civil Code. We’re talking about species’ own rights: development and life in their natural habitat.

This is a historic judgement in recognising the rights of apes. AFADA previously won a case in which an orangutan called Sandra was released from Buenos Aires Zoo. Lawyers argued that Sandra was a ‘non-human person’ because she had sufficient mental abilities. The court agreed that it was unlawful to deprive Sandra of her liberty.

It is not only the Great Apes (orangutans, chimpanzees, gorillas and bonobos) that some lawyers claim are legal persons, but also cetaceans (whales, dolphins and porpoises). Professor Thomas I. White from Loyola Marymount University says:

The scientific evidence is so strong for the intellectual and emotional sophistication of dolphins that there simply is no question that they are ‘nonhuman persons’ who deserve respect as individuals.

The public also realises this. The documentary Blackfish raised awareness about the cruelty of keeping killer whales captive. As a result, SeaWorld’s profits dropped by 84% and attendance plummeted.

Nonhuman Rights Project President Steven Wise is also trying to change the legal status of certain non-human animals from ‘things’ to ‘persons’. But it’s a struggle. A New York court previously ruled against recognising chimpanzees as legal persons because they do not participate in society and cannot face legal consequences for their actions. In response, Wise pointed out that some humans, such as children and certain disabled people, may be held less accountable legally yet still receive full rights and have unquestioned ‘personhood’.

The rights of other animals

Philosopher Peter Singer made a similar argument in his essay All Animals Are Equal. He highlighted that we (rightly) define a one-week old infant or someone with severe brain damage as a person with certain rights. But a fully-grown animal – such as a horse or pig – may have the same, or a higher degree, of awareness and intelligence than the brain-damaged person or infant. Yet they have no rights. In his view, this is inconsistent.

His thought experiment shows that we disregard the interests of animals, not because they lack an essential characteristic that we have, but because they belong to a different species. This bias is called ‘speciesism’. It is similar to sexism, racism and homophobia, in that it pinpoints an arbitrary characteristic – in this case, species – as morally relevant.

But what should be relevant is something much more basic. Singer was influenced by English philosopher Jeremy Bentham, who said:

Is it the faculty of reason, or perhaps, the faculty for discourse?…the question is not, Can they reason? nor, Can they talk? but, Can they suffer? Why should the law refuse its protection to any sensitive being?

So according to the arguments above, we should protect non-human animals because they can suffer. This also ties in with Judge Mauricio’s conclusion: a life in a natural habitat should be considered a specific right. It is a specific right because life for a chimpanzee in a zoo causes suffering.

But why should this right not extend to other animals in captivity? As The Canary previously reported, it is not just the great apes who suffer in captivity, but elephants, lions, tigers, and polar bears as well. Research illustrates that stress and lack of exercise are killing elephants in zoos. Rob Atkinson, previous head of wildlife science at the RSPCA, commented:

Elephants are having a torrid time in our zoos, judging by this overwhelming evidence.

Even if we found that gorillas and chimpanzees suffer more in captivity than lions, this would not justify keeping lions captive. And the same applies when comparing lions to other animals. Why should we deny any animal a right to a natural life? If we follow Singer’s, Bentham’s, or Mauricio’s arguments to their logical conclusion, it becomes difficult to justify keeping any wild animal in captivity.

In her closing statement, Mauricio quoted German philosopher Immanuel Kant. He said: “We may judge the heart of a man by his treatment of animals.” Another German philosopher, Arthur Schopenhauer, made a similar point:

Compassion for animals is intimately associated with goodness of character, and it may be confidently asserted that he who is cruel to animals cannot be a good man.

And they’re both valid points. But Kant still believed that animals had no intrinsic value. He didn’t think any animal deserved personhood. To be fair, though, scientific knowledge about the abilities of apes and cetaceans was lacking at the time.

Kant said that we have indirect duties towards animals, insofar as our treatment of them affects our duties to people. For example, it’s wrong to be cruel to animals, but only because it means we are more likely to be cruel to people.

Many will celebrate the recent court ruling in Argentina as a victory for animal rights. But it just doesn’t go far enough. Hopefully, it will pave the way for a more compassionate understanding of non-human animals.